Wordle Archive was a website that gave players access to all Wordle puzzles created before today, however, the New York Times, the owner of Wordle, has now got it to shut permanently after terming it “unauthorized.” 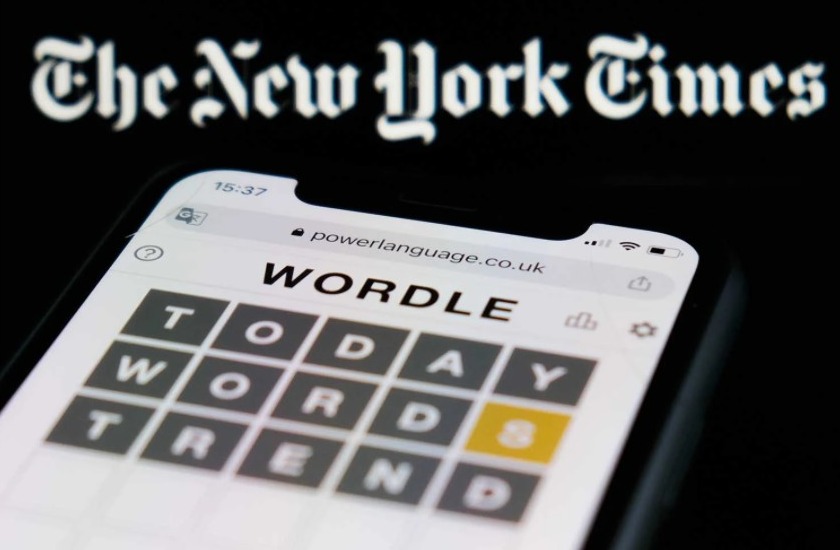 The now-defunct game provided players extra practice at the five-letter word game by allowing them to find and play any of the previous Wordles. Now, the website by Metzger Media displays the following message:

“Sadly, the New York Times has requested that the Wordle Archive be taken down,” a message on the website reads. “However, you can still play the daily Wordle over on their official site.”

It further suggests you try out some other games that are very similar in nature. After this action of The NY Times, the popular Wordle spin-offs such as Heardle, WARdle, Quordle, etc, could also be at risk.

After Wordle got viral and received massive popularity, The New York Times acquired it for a sum of $1 Million. The popular word game allows players worldwide to brainstorm and guess a word every day.

Wordle Archive was a website by Metzger Media that saved all the previous Wordles and presented it on its website. A player could play any of the Wordles from the backlog except for the latest one.

The interface was the same, the rules were the same, and the only difference was you could play the past Wordles as many times as you wish. However, the New York Times has requested and got the website to be terminated permanently.

ArsTechnica first reported the close which happened on March 16, 2022. Upon opening the website, you will see the following message: 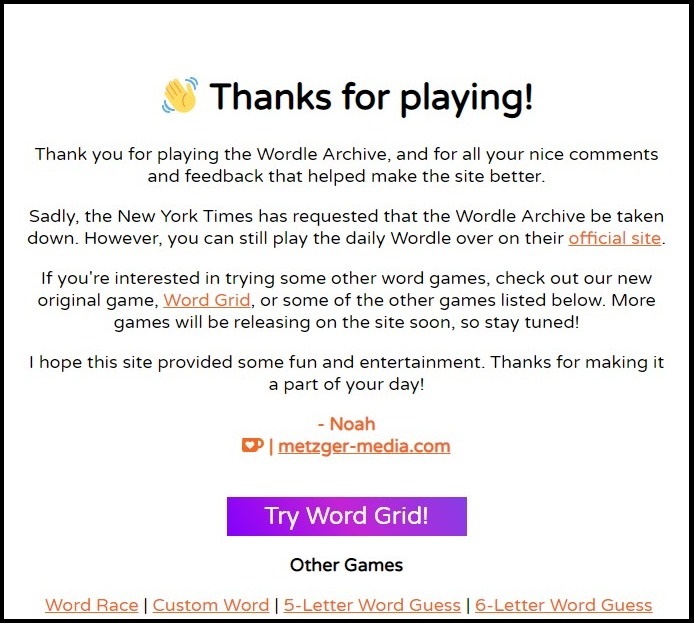 Fortunately, other games available on the website such as Word Grid, Custom Word, etc are still working.

Although the firm Wordle fans would still be able to access the cached version of the Wordle Archive using the Internet Archive.

Is New York Times Planning to Create its own Wordle Archive?

The Wordle Archive was pretty fun and useful for players who have recently started enjoying Wordle and made it a part of their daily routine. Players who just want to play Wordle multiple times can still enjoy Wordle Unlimited, which is a popular spin-off.

The worst part is that The NY Times didn’t have any archive for Wordle. However, with the company getting the most popular archive closed, it could be planning to develop and launch its own Archive.

The New York Times’ actions are still justified but it would make more sense if they launch their own archive for the insanely popular word-guessing game soon. The Verge has also reported that “it is planning to create its own archive just like it has for crossword puzzles.”

Is there any active Wordle Archive available now?

Fortunately, yes. There are multiple Wordle Archives still active on the Internet right now. The most stable one is by computational biologist and designer Devang Thakkar who launched it in January. 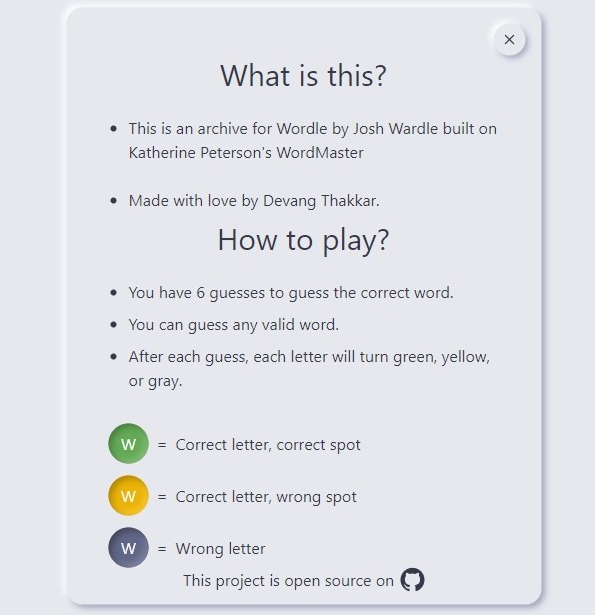 He had also revealed that his website is getting 100,000 users a day, which is a live testament to how crazy the masses are for Wordle.

You can open a browser, and visit this link to start enjoying the Wordle Archive by Devang Thakkar. You don’t need to learn anything new if you have been playing Wordle frequently. All rules are the same.

Are other Wordle Spin-offs at Risk?

After getting viral, Wordle has helped countless variations and spin-offs take birth and rise to popularity. There are Wordle spin-offs of all sorts available for different categories of players. Football fans, Fortnite fans, Geography lovers, etc could enjoy specific Wordle versions to name a few.

Now, the spin-offs could be at risk since The NY Times is keeping an eye on websites milking Wordle’s popularity after getting the infamous Wordle Archive shut.

The New York Times filed for a Wordle trademark on February 1, 2022, which is the day after announcing the seven-figure purchase deal with Josh Wardle. This means that the company can go after any spin-off that is using Wordle’s name.

it's not really a monopoly though, because it's extremely easy to clone; just saving the webpage and hosting it on your own website

given the choice between "pay $5/month" and "google search 'wordle but free'" the vast majority will choose the latter, and NYT won't risk that

This put several Wordle Spin-offs at risk, however, removing them from the Internet completely wouldn’t be very much possible. There are also reports that the NYT would not keep Wordle free forever.

If that happens, you can just download the game and continue playing it free for years. Do you want us to create a separate guide on how to do that? Let us know in the comments and we’ll be glad to do that.

What do you think about the NYT’s action of getting the Wordle Archive shut? Is it justified? Share your thoughts using the comments section.