After so many Wordle-spin offs getting popular lately, baseball fans have also got their own MLB version called WARdle which is a stats-heavy game. And no, we aren’t talking about Josh Wardle here, the man behind the original word-guessing game that NY Times owns now. 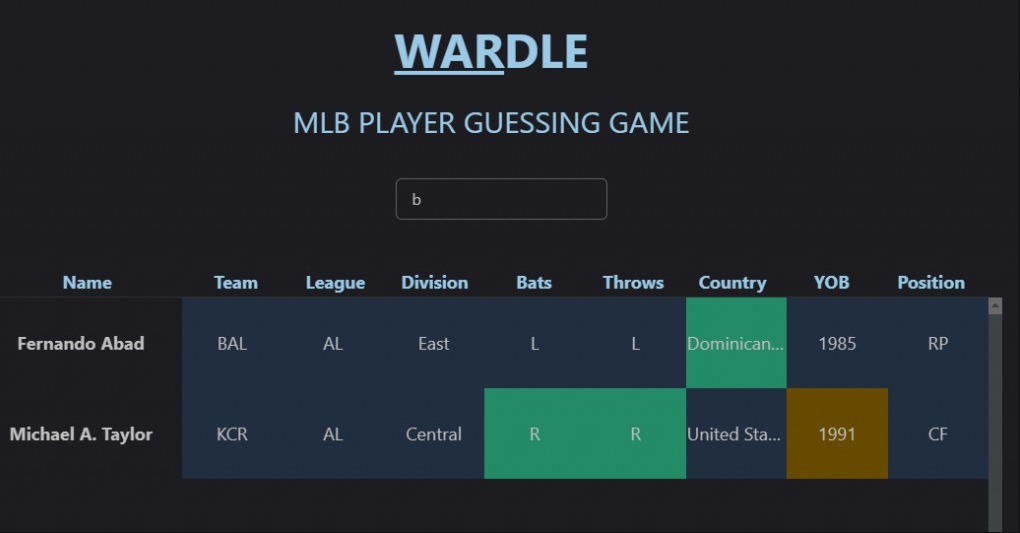 Wordle has been a massive hit among Internet users, and that’s why the NY Times bought it for a massive sum of more than $1 Million. Now, we have many spin-offs based on it such as Quordle which is a very challenging game, Heardle for music fans, “Who Are Ya?” for Football freaks.

WARdle takes inspiration from all of these, and also from Poeltl, which is an NBA-inspired Wordle-like game named after the San Antonio Spurs center. Jeremy Frank, a Purdue University student and the man behind @MLBRandomStats has created it alongside the designer Zach Ellis.

Frank said in an interview, “There have been so many knockoffs of the original Wordle that I feel like baseball was the logical next step. After Poeltl came out, it just made sense that there would be a baseball equivalent.”

In another piece of an interview, Ellis had said, “I hadn’t played Wordle much, and I didn’t even know about Poeltl initially.  But @GiraffeNeckMarc tweeted about wanting an MLB version of Wordle. I saw the appeal for a game like that and decided it would be fun to give something like that to the fans, just a fun little game they could play to test their MLB player knowledge.”

WARdle is a web-based browser game that follows the same concept as Wordle, but instead of words, you need to guess the name of a fan-favorite Baseball player. Just like Wordle, every day, a new player’s name is set as the WARdle of the day, and fans keep brainstorming who is it.

The players are from MLB (Major League Baseball), which is the world’s oldest and biggest professional sports league and a baseball organization. WARdle is specifically built for baseball fans as they didn’t have a Wordle-version for them.

Since Jeremy Frank has created it, you can find some very interesting baseball stats and facts while playing. Zach Ellis maintains the design and development part of the program.

WARdle Rules and Conditions You Need to Know

Although WARdle is highly inspired by Josh Wardle’s Wordle, it still has certain rules and conditions that make it different than the latter. Frank has explained, “A player won’t be included unless they play very often or are very well known, or usually both.”

In WARdle, you will get 8 chances to guess the WARdle of the day, which is the name of a baseball player. Every day, a unique player’s name will be set for everyone in the world. When you are guessing, the columns will change color according to your input. 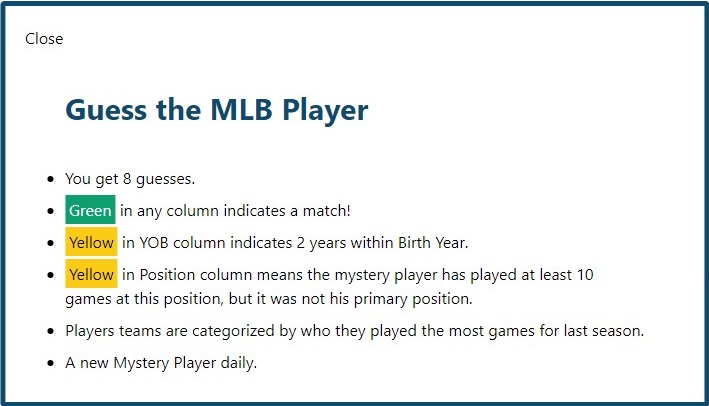 The players are also organized into Teams based on how many games they played in the previous season. Ellis has also confirmed that WARdle is currently in the early stages. He is working on lifetime stats currently, and baseballs fans should be excited about the statistics.

How to Play WARdle?

Playing WARdle is as simple as playing Wordle, but you must have a rich collection of information about baseball, specifically MLB. This is how you can play it:

Once you have guessed the name right, you can directly share the result to Twitter or any other social media platform to showcase your skills.

My new favorite game. Baseball is BACK

Can you play WARdle on Mobile?

Yes, you can play WARdle on mobile using any compatible browser including Chrome, Safari, Opera, etc, just like you play it on PC. A few days ago, the game servers weren’t able to handle the active requests, so it wasn’t working on mobile phones.

However, now the game is working perfectly fine on smartphones.

WARdle mobile has been patched and it should be accessible. HERE'S THE THING. If you tried playing today from your phone, it logged those guesses. so now your phone will show those guesses. It's okay, tomorrow, new player, everything will reset.

Ellis has explained that “I chose a free server level that allows 500 people to request data from the server at a time.  I thought this would be enough. Well, as the MLB and MLBPA were coming to an agreement we saw an opportunity to publish… excitement around baseball skyrocketed, and immediately the server had somewhere around 1.4K requests.”

There’s one more Wordle-esque game for baseball fans but it is fairly different from WARdle. The name is Wendle and Joey Wendle is the inspiration behind it. This game follows the same concept as Wordle and it is exclusively a spelling game.

There is no player information or stats involved, unlike WARdle. You have to simply guess the word just like you guess in Wordle, but the word will be revolving around baseball.

However, if you have a gray tile, then the letter is completely unrelated and you should drop it. After six chances, if you are able to guess the word correctly, you win. You can then share your result on any social media platform.