WhatsApp Communities Announced: Everything We Know About It

Meta, the parent company behind WhatsApp has announced the launch of WhatsApp Communities, which will lead to the next major evolution of the instant messaging application. This new feature will be available to manage groups better and engage in more meaningful conversations. 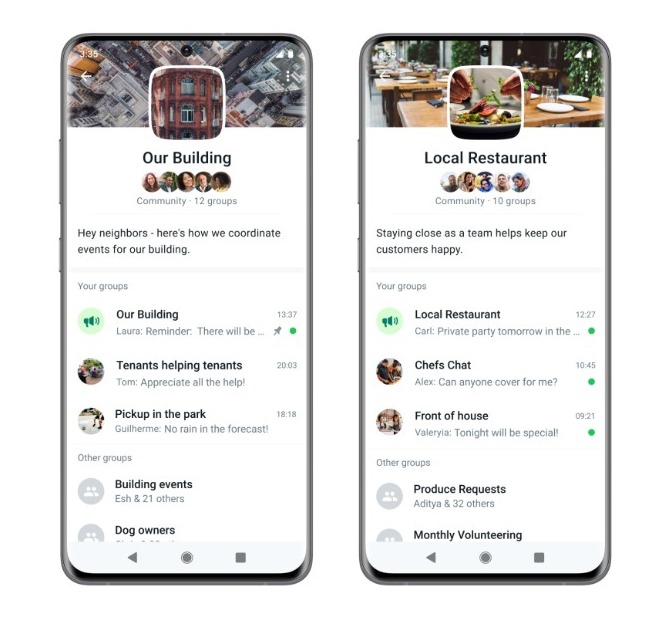 WhatsApp Communities will allow users to participate in larger discussion groups that aim to serve the purpose of larger group chats while also having support for added tools like extensive file sharing, 32-person group calls, and emoji reactions. Admins will have increased control over them.

Mark Zuckerberg, the CEO of Meta, wrote “It’s been clear for a while that the way we communicate online is changing. Most of us use social networks and feeds to discover interesting content and stay updated. But for a deeper level of interaction, messaging has become the center of our digital lives. It’s more intimate and private, and with encryption, it’s more secure too.”

The feature is currently under development and WhatsApp will begin testing it in a limited number of countries soon, and the global rollout will take place soon after.

What are WhatsApp Communities?

As of now, WhatsApp groups have a limitation of a maximum of 256 participants and you need a user’s phone number to add them to a group. With the launch of the WhatsApp Communities tab, users can bring together separate groups under one section that will thousands of people be a part of a community.

When you are in a WhatsApp Community, your phone number stays hidden from everyone, except admins and the people in the group you are a part of. Any user can create a community and add multiple groups to the community, but the groups will only be added when their admin accepts the invitation.

Users can join a community exclusively via the admin invitation, as they can’t search for them like Facebook groups. WhatsApp will also add powerful new tools for admins in Communities for better moderation and control over the expanded group chats.

Admins will also have the power to broadcast a message to all the groups, given they have enabled the feature. Zuckerburg describes the launch of this new feature as the “next major evolution.”

WhatsApp Communities make organizing groups chats and finding information fairly easier as they bring multiple group chats into one community. They are like the Directory for groups where a similar set of groups come together to be a separate community.

Today we’re very excited to share our vision for a feature we’re calling WhatsApp Communities. This is new functionality we’re building to support the many organizations that use WhatsApp to communicate in a private and secure way. pic.twitter.com/LxEccdgJq8

Take a look at the features:

WhatsApp Communities would allow group members that are part of the community to engage with each other one-on-one privately without having to show their number.

Forwarded Messages will be Limited in Communities

WhatsApp will also limit forwards in Communities to prevent the spread of misinformation and spam. In Communities, messages that have already been forwarded will only be able to be forwarded once in a group, at a time.

1. Whatsapp is introducing a new feature, known as Communities, which will allow users to create collections of groups.

The company says it will also introduce new restrictions that set a forwarding limit on messages that have already been forwarded once. pic.twitter.com/961RDF19Yb

Admins have enhanced control over the Community

The admins of WhatsApp Communities will be able to add members individually or they can share an invite link. Admins can also remove members as well as remove the inappropriate messages or media from the chats without any limitations.

Additionally, admins will be able to share announcements or broadcasts to all Community members (the members of all sub-groups) together. Whereas the community members can only chat into the smaller groups the admins have created or approved.

With the launch of WhatsApp Communities, WhatsApp is also increasing the limit of sharing files up to 2 GB to help the groups share information and data from the currently existing limit of 100 MB.

However, the 2GB file size would be given for sharing documents, and not for media including images, videos, and audio files which will have the same size limit of 16 MB. 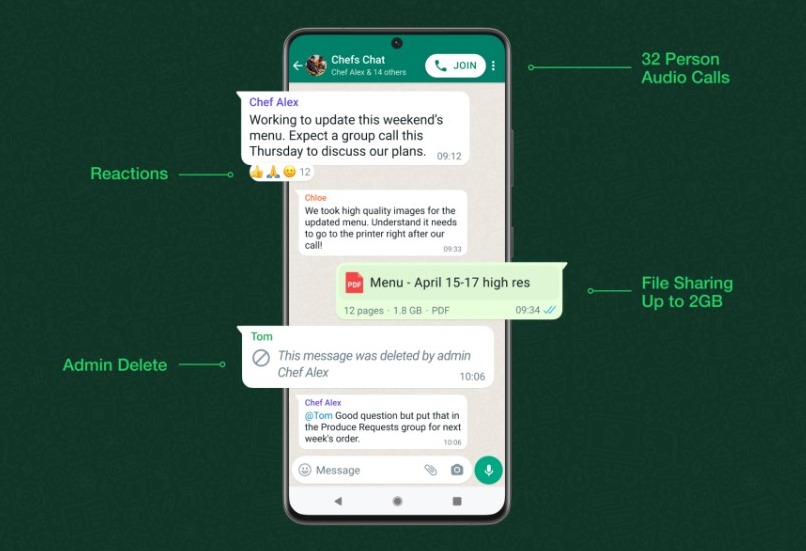 WhatsApp Community members can also host voice calls with up to 32 people. “We’ll introduce one-tap voice calling for up to 32 people with an all-new design for those times when talking live is better than chatting,” Meta says.

Communities will have Reactions to Messages

WhatsApp is also introducing “Reactions” that will be available for group chats, one-on-one chats, and communities going forward. These reactions will allow people to quickly share their opinion without having to flood the chat with irrelevant messages.

Reactions are already available on Facebook and Instagram, and WhatsApp will also have them from now onwards.

How will WhatsApp Communities Work and Help Everyone?

Meta has noted the situation in India where people used WhatsApp to share the availability of beds and access medicines during the massive Covid-19 outbreak. The company said if such a feature was available there, it would have been very useful.

WhatsApp Communities can prove to be a very useful innovation for society as brings multiple group chats under one big community. They can be useful for companies where all the employees are added into the community but under different groups relevant to their department. 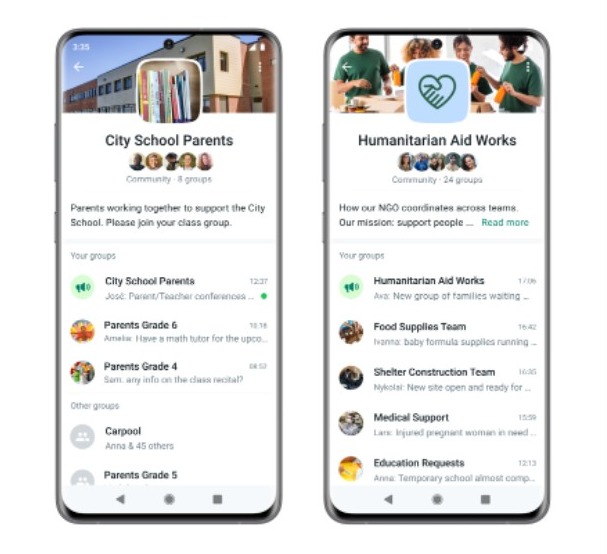 Schools can also create and use a community to add parents and students to it while having separate groups for different classes. They can share information, reports, and updates with the parents in a much easier way.

WhatsApp Communities will allow all sorts of closely related groups to come together and form a bigger group, which could be for business, religious congregation, or to find certain resources.

“We’ve been hearing increasingly from organizations that use WhatsApp for their private communications. We think it’s time to start building with the intention for those use cases because there’s a lot we can do to make it better,” says Will Cathcart, the head of WhatsApp.