After an intense Qualifying session a day of heavy driving, the Saudi Grand Prix is all set to be an exciting spectacle on Sunday. After a humid start to Saturday, all eyes are set on the main race. 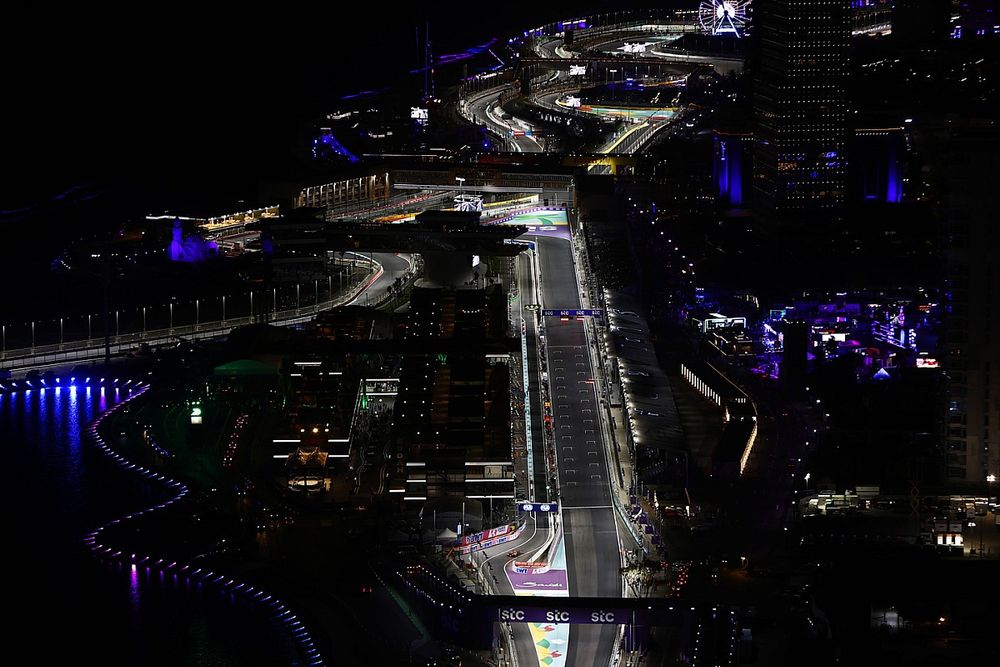 Sergio Perez starts at the top of the grid, alongside both the Ferrari drivers, Charles Leclerc in second with Carlos Sainz making it to third.

The Jeddah Corniche circuit has a 6.1-kilometre course which is a significant departure from recent F1 street track designs. It is named as ‘‘world’s fastest street track circuit’ on the Formula One calendar this year. The cars tend to reach the average speeds in excess of 260 km/h (165 mph).

The drivers were comfortable, with very few hitting the curb on extreme corners.

Q1 started as all the drivers were ready to make an impact after a quiet session of Practice. In Q1, Nicholas Latifi has crashed at Turn 13 and the first red flag of the session was to be seen. The Williams driver seemed to have lost control of the car, wrecking it at the corner.

As the cars returned to the track after the red flag, fans witnessed a shocking moment in history. Lewis Hamilton was knocked out of the qualifying session.

The seven-time World Champion failed to get his Mercedes through to the second session of qualifying for the first time since Brazil 2017. After winning a lucky podium at the Bahrain Grand Prix, the world was taken aback to see him not qualify in the top 15. His car showed no support either, as it lacked necessary pace.

Aston Martin’s Nico Hulkenberg who is the replacement of Sebastian Vettel, had another bad day at work, when he failed to make it to the next round.

In Q2, another dangerous crash was witnessed when Mick Schumacher bumped his Haas into the concrete walls, splattering wreckage all over the track. Mick made it out safely and was not hurt. The German, son of Formula 1 legend Michael, remained in the cockpit afterwards but was conscious

However, another red flag was shown, stopping the Q2 for a brief amount of time, as the officials collected the debris off the track.

Mick was safely extracted from his car and was sent to the Medical Centre to be tested for concussions. He confirmed his positive health after posting a photo of himself on Instagram :

It was an expected battle between the Red Bull and Ferrari drivers, as their drivers occupied the top 4 positions going into Q1. Carlos Sainz who obtained provisional pole, was quickly outrun by Sergio Perez, who scored his first pole in his 215th start.

Ferrari who came to Jeddah with instilled confidence after making a fabulous 1-2 podiums comeback at Bahrain, will start 2nd and 3rd. Sergio managed to beat Ferrari’s Charles Leclerc to first position for Sunday by only 0.025 seconds.

Max Verstappen missed out on the top 3 by a small margin. He starts 4th with Esteban Ocon making a surprise 5th position.

Here is the complete Starting Grid for the Saudi Arabian Grand Prix: 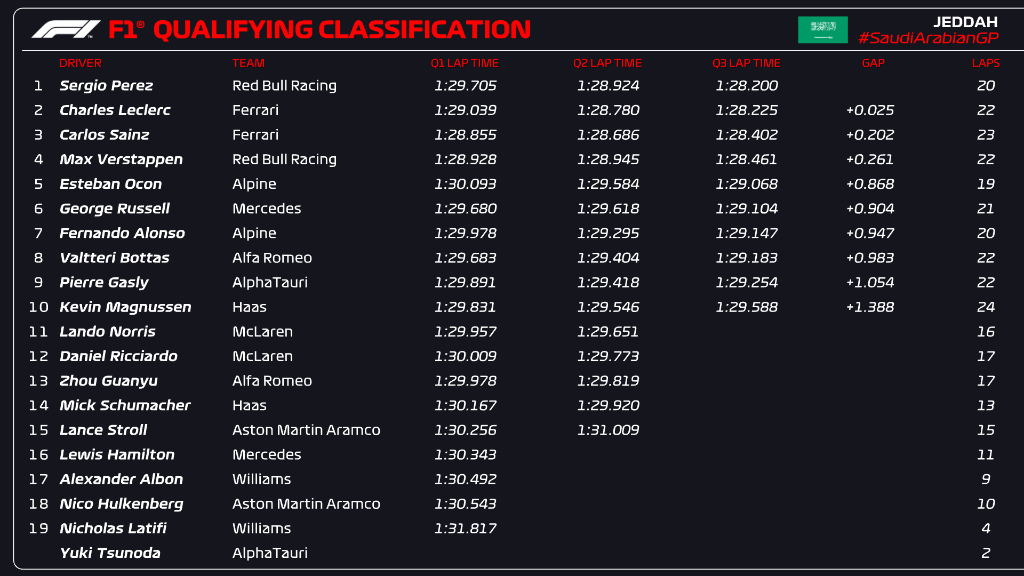 Kevin Magnussen who finished a magical 5th last week, sees himself start at 10th place. He will be looking to continue his momentum of bringing points for his team.

The Alpine team looked fast where Esteban Ocon finished 5th and his teammate Fernando Alonso pushing to 7th. It will be intriguing to see how they race on Sunday.

With yet another disappointment for McLaren, neither of the drivers will start in the top 10 on Sunday. They are also another team who will look to earn some points to gain stability.

Max Verstappen and Sergio Perez both appeared to be on for a podium finish at the Bahrain International Circuit until their cars suffered an abrupt and dramatic loss of power.

Verstappen was forced to retire three laps from the end after challenging Ferrari’s Charles  Leclerc for the win for much of the race, while Perez spun out of third place at Turn 1 on the final lap when his car switched off, giving away victory to Lewis Hamilton.

After the race, Red Bull team principal Christian Horner suggested that both problems were related to the fuel pumps in the car and insisted that a fix would be put in place ahead of the second round of the season in Saudi Arabia this weekend. 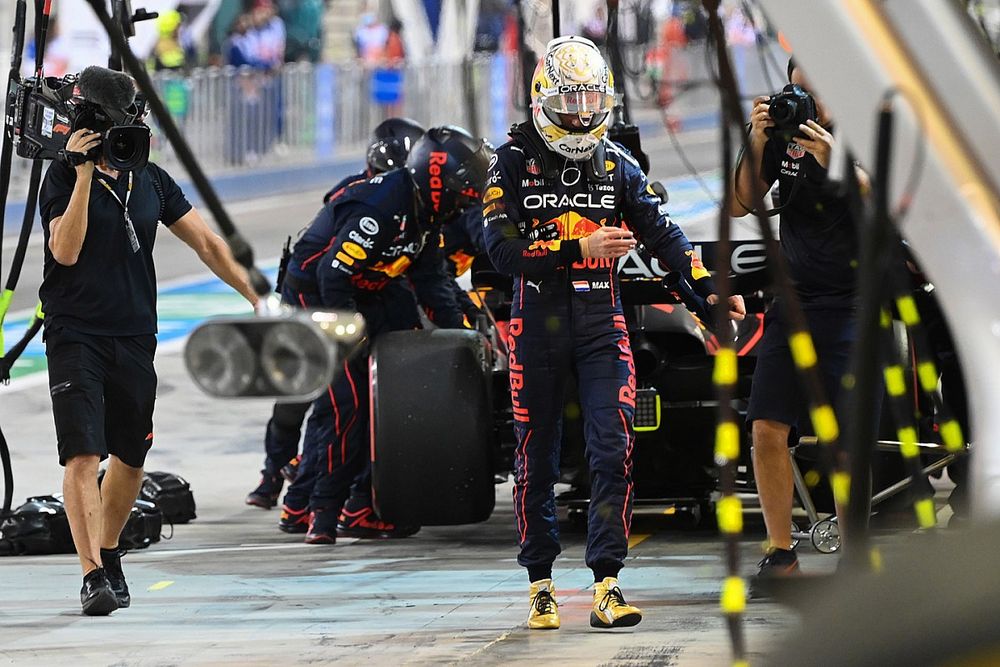 On Friday, Red Bull released a statement confirming the cause of the failures and said it is confident of avoiding a repeat in Jeddah.

With Sergio Perez finishing at the top of the grid in qualifying and Max not far behind in 4th, Red Bull will aim to open their account with points on Sunday. They are Ferrari’s main challengers and top contenders for the Championship.

Mercedes’s flagship driver Lewis Hamilton had his worst quailing in 13 years, after he was knocked out in Q3 itself as he failed to make it ahead.

Although he finished third last week with George Russell who finished right behind him in fourth, this Sunday seems tedious for the British drivers.

George Russell has yet not made the impact he would have anticipated when coming to Mercedes. He finished 6th in qualifying, but his car was no match to the far superior cars of Red Bull and Ferrari. 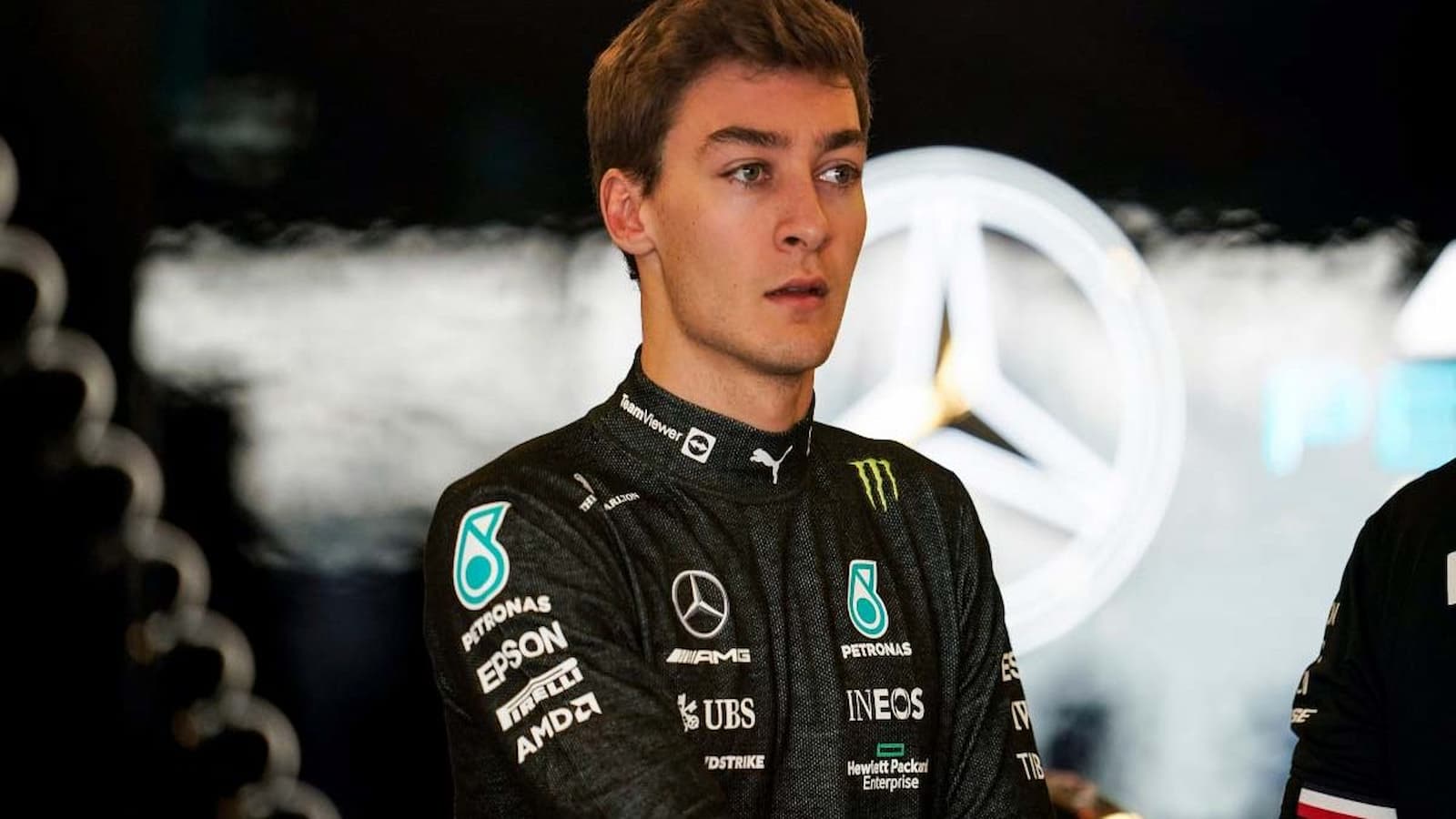 Sunday would be the perfect opportunity to prove himself and the world why he was picked by Mercedes. If Mercedes fail to get close to Red Bull and Ferrari, they might see themselves missing out on much silverware this year.

Here is what Hamilton had to say after his qualifying:

“I’ve got the same car as I had in qualifying so I don’t anticipate moving that far forwards,” he continued. “But I’ll give it everything.”

When is the Race? 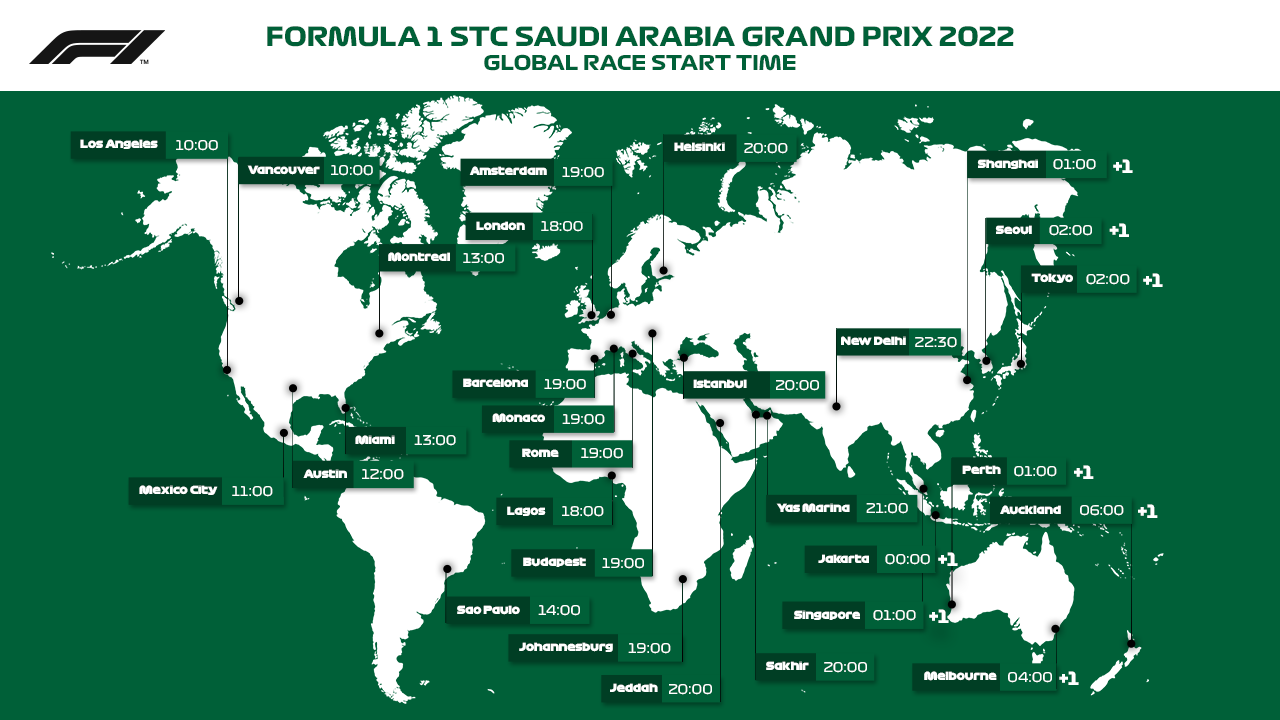 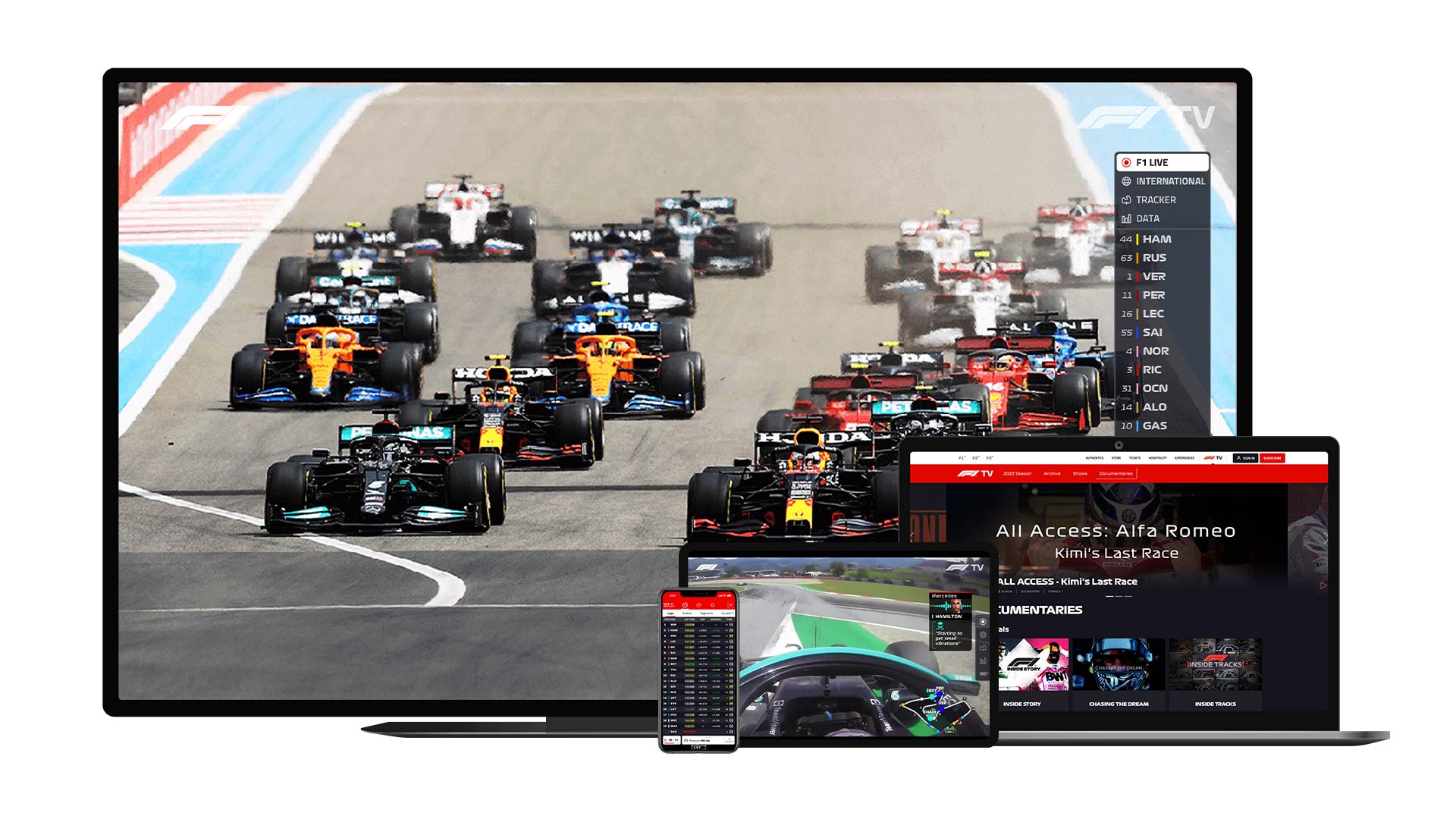 The race will be streamed live on the following channels: With Ferrari in solid form, we expect both of their drivers to finish in the top 3, with the pole-starter Sergio Perez in their midst. Hence we predict: