Instagram is going “Justin-Blinger” as the Grammy Award-winning singer Justin Bieber flaunted a megawatt smile, revealing a custom set of diamond-encrusted grills by celebrity jeweller Johnny Dang. The new custom-made diamond grills by the “King of Bling” are possibly more than $12000. Read on to learn more.

The 28-year-old Canadian singer flaunted his brand new custom diamond-encrusted grills on Instagram. And yea, he is shining even brighter. The “Baby” star’s top and bottom teeth jewellery, popularized by Black culture, was done by none other than celebrity jeweller Johnny Dang, who is also known as the “king of bling”. Justin was seen donning a yellow bucket hat while flaunting his megawatt smile in these precious grills. Earlier this month, Dang took to Instagram and revealed Justin’s teeth mould process via a video. This may be Bieber’s first full set, but he previously showed off grills on his lower teeth in 2019 — along with a fresh eyebrow piercing. The “Believe” star is indeed known for his unique fashion statement.

Fans and celebrities are going crazy about this addition by the “teen pop”. One fan expressed her love for these diamond grills by commenting, “Your top post️.” Another fan wrote, “Give me a soul kiss”. Phew, I don’t know how a real one would feel to Hailey Beiber.

Justin’s reps haven’t responded about this new addition to Justin’s glamourous diamond grills but Dang’s website has diamond grills available to purchase starting at $600 per tooth — or $12,000 for a maximum of 20 teeth in SI diamonds, with options to upgrade the quality to VVS for double the price.

The Vietnamese celebrity jeweller Johnny Dang is based in Houston, Texas. He is known for his custom grills and involvement in the American hip-hop scene. He is a founder of Johnny Dang and Co.

Dang has been referenced in musical recordings by Migos, Gucci Mane, Lil Pump, Lucky Luciano, DaBaby, and many more famous rappers. He has also appeared in music videos like “Gucci Bandanna” by Soulja Boy, Gucci Mane, and Shawty Low, “No Angel” by Beyoncé, and “We Takin’ Over” by DJ Khaled. 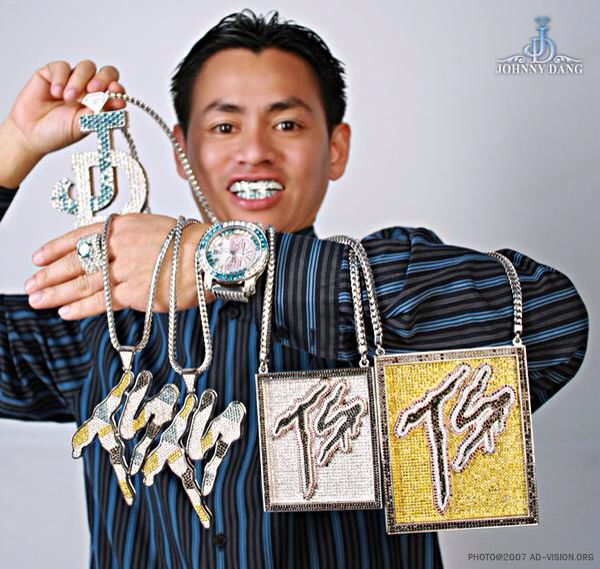 Dang himself has provided vocals for songs, such as “Stay Iced Up” off Paul Wall’s album Heart of a Champion. Dang has worked with tons of celebrity clients to bling out their smiles, including Tyga (whose blue diamond set can be purchased for $28,000), Travis Scott ($14,400), and Lil Pump amongst others.

FYI, this may be the Canadian singer’s first full set of diamond grills but previously in 2019, Bieber showed off grills on his lower teeth along with fresh eyebrow piercing. Well, Bieber is currently on his Justice Tour, and guess what, he’d be shining brighter than ever!