It’s been some terrible years for Johnny Depp but he has finally started to see light at the end of the tunnel. Depp is being extremely cautious after his fierce defamation trial against his ex-wife Amber Heard following the extensive media coverage across the globe. Now, Depp has urged his fans to stay cautious of fake profiles made in his name. Read on to learn more about his public statement.

Got No Private Or Side Accounts Anywhere! 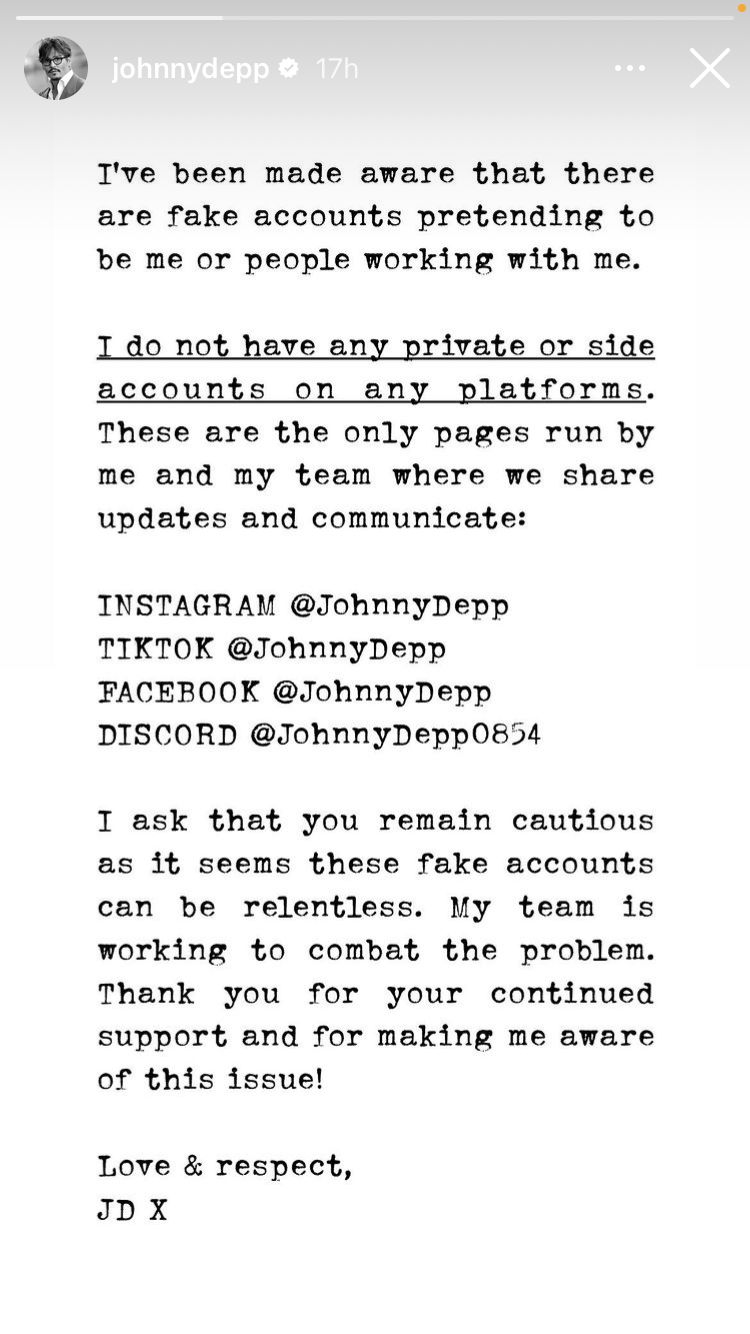 The “Pirates of the Caribbean” star made a public announcement regarding his social media accounts and reassured his fans about the official accounts so they can distinguish between the fake and real ones. Depp wrote on his Instagram story:

“I’ve been made aware that there are fake accounts pretending to be me or people working with me. I do not have any private or side accounts on any platform. These are the only pages run by me and my team where we share updates and communicate:

Depp added, “I ask that you remain cautious as it seems these fake accounts can be relentless. My team is working to combat the problem. Thank you for your continuous support and for making me aware of this, Love and Respect! JD”

The public statement comes amid a surge in fake social media accounts claiming to be the actor. After the enormous amount of attention that the Depp V. Heard trial gathered, he recently went away to Finland to cool off after the trial, and he went on Instagram to reassure what were his official accounts. We all know that Amber Heard not only defamed Johnny Depp but took away from the most crucial years of his career. Depp underwent mental and physical abuse. Not only this, but he faced financial loss as he went on losing films as Hollywood slammed the door on his face.

Per the Virginia court’s verdict in Johnny Depp’s defamation trial, Amber Heard has to pay $10.3 million to “The Pirates of the Caribbean” star. As Johnny gets his life back, Amber seems to be stuck on him. Previously she was fuming out of jealously when she saw Johnny making a successful debut on TikTok, and just a few days back, she said she is still in love with him. Despite her tantrums and false accusations, Depp managed to get his life and career back. However, in a recent interview with Savannah Guthrie for NBC news, she confessed that she still loves Johnny Depp but also stated that there was one piece of evidence that was not allowed in the courtroom, which she believes might have changed the outcome of her defamation trial against him.

In an exclusive interview with @SavannahGuthrie, Amber Heard continues to defend herself and insist that she was a victim of abuse by her ex-husband, Johnny Depp. pic.twitter.com/JRsax8cLuV

She claimed by saying, “There’s a binder worth of years of notes dating back to 2011 from the very beginning of my relationship that was taken by my doctor, who I was reporting the abuse to.” Well, she may continue to crib on her loss but it is clear that Johnny was the one who was a victim of domestic abuse.

As for the present statement, we urge the fans to acknowledge his request and spread the word. The heightened attention amid this defamation trial which turned into a media trial also means that people are creating fake social media accounts claiming to be Depp. We too urge fans to support Johnny.