Read carefully, because I want to know your thoughts on this! While Met Gala revealed its 2023 theme “Karl Lagerfeld: A Line Of Beauty”, honoring the late Chanel creative director’s legacy, Jameela Jamil rushed to Instagram to slam Met Gala for its decision. Once again, she has voiced her anger against the designer, whom she called “a fat-phobic misogynist” back in 2019. 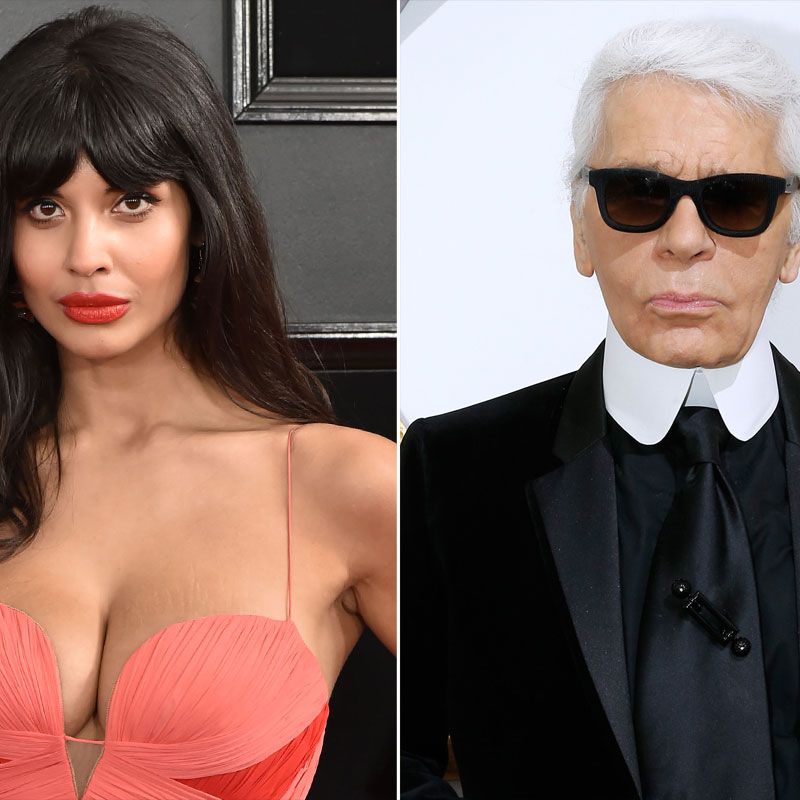 A Talented Designer With Cruel Outbursts…

Met Gala may feel proud about its decision to honor Karl Lagerfeld’s legacy, but English actress Jameela Jamil certainly feels otherwise. As Met Gala revealed its 2023 theme, “Karl Lagerfeld: A Line Of Beauty” to honor the late designer’s legacy, the 36-year-old actress rushed to her Instagram to criticise this decision. Well, she’s got some valid points to keep forward.

In her Instagram post, “The Good Place” actress wrote, “Karl Lagerfeld is the theme for the entire Met Gala next year. This man… was indeed, supremely talented, but used his platform in such a distinctly hateful way…” She explained how the late designer had cruel outbursts, especially towards women, showing no remorse or offering no atonement or apology to the groups he attached.

Jameela believes that there are more talented designers out there who deserve to be credited for their work. She revealed that Chanel’s creative director never offered an explanation for his constant “cruel outbursts”.

Not only this, but Jameela quoted several examples wherein Karl targeted women who were sexually assaulted, gay couples who wanted to adopt, and body-shaming a group of women. Jameela revealed that one of the greatest harms he ever caused, included the Muslim refugees, and “the disgusting way he spoke about people fleeing their homes for fear of their lives”.

Jameela strongly feels that Met Gala had other options of amazing designers who “aren’t bigoted white men”, further questioning everyone’s principles and advocacy. She continued, “You don’t get to stand for justice in these areas, and then attend the celebration of someone who revealed in his own public disdain for marginalized people.”

In the end, Jameela wrote, “Sorry, but no. This isn’t the 90s. We didn’t fight all this shit just to throw it all away because some white guy made some pretty clothes for people’s skinny faves… come on now.” Oh well, Jameela truly hates Karl for his ways. Karl Lagerfeld should undoubtedly be remembered as a great designer, but again, he’s not that legendary that Met Gala has to celebrate his legacy. The man known for his signature white hair, black sunglasses and fingerless gloves, served as the creative director of Chanel from 1983 until he died in 2019.

He also served as the creative director of the Italian fur and leather goods fashion house “Fendi”. Apart from his success as a designer, Karl was indeed a “disgusting” person. This is not the first time that Jameela has come forward to speak against the late designer. During his death in 2019, Jamil stated that the designer was “talented for sure, but not the best person”

The body-positive activist shared an article from the feminist website Wear Your Voice titled, “Stop Mourning Oppressors: Condolences For Karl Lagerfeld” on Twitter alongside a brutally honest statement slamming the German designer for his horrible remarks in the past. By calling him a fat-phobic misogynist, she wrote, “I’m glad somebody said it. Even if it is a little soon. A ruthless, fat-phobic misogynist shouldn’t be posted all over the internet as a saint gone-too-soon.”

If you don’t know this, Karl once called Grammy-winning singer Adele “a little too fat” and opened up about the #MeToo movement in 2018 saying he was “fed up” with it, telling models to “join a nunnery” to “avoid the possibility of misconduct”. Apart from this, he got into a controversy with PETA as they voiced against his use of fur, crocodile, snake and lizard skins. Jameela has reminded us of everything that the man was, except for a designer. She shared eight screenshots in her post regarding Karl Lagerfeld, and wrote, “Swipe for receipts.”

The screenshots included several controversial quotes made by Karl during the last years until his death at the age of 85. One of the examples included a 2009 interview with a German magazine, wherein he stated, “no one wants to see curvy women” in reference to the traditionally skinny models on his runway.

He also stated, “You’ve got fat mothers with their bags of chips sitting in front of the television and saying that thin models are ugly. The world of beautiful clothing is about dreams and illusions.” Well, many celebrities are enlightened since Jameela’s post. American comedian Phoebe Robinson wrote, “Wow. Did not know this. Holy shit.”  Sarah Nicole Landry wrote, “I didn’t even know about this so I’m glad you’re sharing!” One fan commented, “This is incredibly brave of u to post, thank u.”

Another fan addressed the issue by writing, “This is just a case of a person with an ungodly amount of self-loathing. No normal person speaks like this about anyone unless there are traits in themselves they despise. With all this being said, there is no excuse. And he should be held accountable even after death.”

Another fashion student brought forward another controversial story about Karl as she wrote, “I remember when I was studying in London (2003-2006) that he ended a short-lived partnership with H&M when he found out they would have his designs in plus size.”

Another social media personality, wrote: “Wow. Literally didn’t know about any of this. But there’s no way Vogue didn’t! It’s their job to know!!!” One fan mentioned that once someone dies, everyone tends to forget the horrible things they did.

Well, everyone, now is slamming Met Gala for choosing this German fashion designer man, who defended the sexual assault of models, sent flowers to the accused rapist, Dominique Strauss-Kahn, and made women feel pathetic about their bodies.

If you aren’t aware, Met Gala announced its next year’s theme on Sept. 30 at the Metropolitan Museum of Art Costume Institute, confirming that the Met Gala 2023 theme would be, ‘Karl Lagerfeld: A Line of Beauty’. The event will pay tribute to the longtime creative director of Chanel following his death in 2019 from pancreatic cancer. But again, is it even worth it to celebrate his legacy? Do you stand with Jameela on this? Well, I do!