While most of the Fall 2021 anime are on the brink of concluding, the Funimation Winter 2022 Line-Up has made an appearance. Undoubtedly, the US Entertainment company has multiple cards to play during the next season. Starting from January 5th, 2022, the winter anime looks entirely promising.

Nevertheless, some anime will certainly continue their run from 2021. With a lot on the plate, let’s discuss all the new/continuing anime. 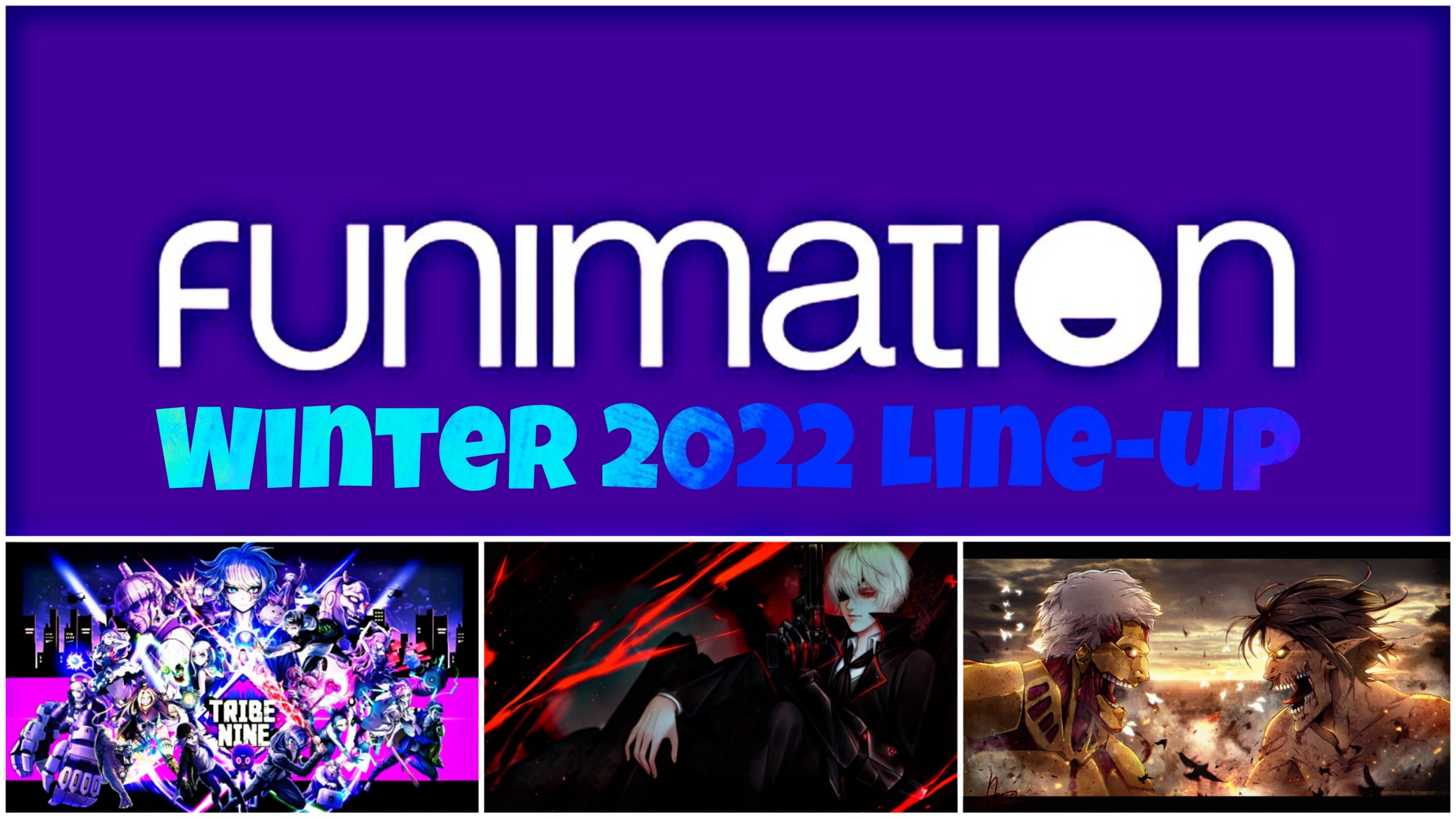 Plot: Revolving around three childhood friends, the story takes place on a man-made island. Sitting on the Tokyo Bay, the Far Eastern Special Administrative Region (24th Ward) conceals some secrets. Moreover, Shuta, Ran, and Koi were born on the island.

Though the trio has a different upbringing, personalities, etc., they reunite a year after a certain incident. Reunited at their friend’s death ceremony, the trio gets a call simultaneously. Surprisingly, the one on the call is their friend who’s supposed to be dead. Let’s see how this anime entertains us.

This CloverWorks’ romantic comedy, a slice of life anime has grasped massive attention with its trailer. Providing us with a wholesome vibe, the anime will surely attract multiple viewers.

Plot: Featuring a cosplayer and a Hina doll craftsman, the anime has a twisted storyline. Wakano Gojo is a simplistic high schooler who aspires to become a Hina doll craftsman. However, Marin Kitagawa (the school’s goddess) grasps Gojo’s talent at stitching and designing. Hence, she starts requesting him to work as her Dress-up Darling. Thus, a story of an extrovert-introvert couple starts.

The Cast Members of My Dress-Up Darling:

Continuing, CloverWorks’ Akebi Sailor Uniform is another Slice of Life anime for Winter 2022. Releasing on the same date as My Dress-Up Darling, let’s see how this anime performs.

Plot: As a countryside girl, Akebi Komi hi aspires to wear her school’s sailor uniform. Winning the entrance to the prestigious Roubai Academy middle school, Komichi is now one step closer to her goal. Moreover, she wants to make a hundred friends while achieving her dream. Let’s see how her efforts pull up.

Releasing on the same date as two other anime, the 2nd part of How A Realist Hero Rebuilt the Kingdom has grasped considerable attention. J.C. Staff’s fantasy, comedy, and isekai anime performed well during its spring run. Let’s see how the 2nd part plays its role.

Plot: Kazuya Soma is a humanities student who teleports to an unknown world. Moreover, the kingdom where he lands is on the brink of collapse. However, Kazuya solves multiple problems with his vast knowledge. Aspiring to rebuild the kingdom, Kazuya turns a hero and attracts multiple women. Hence, a harem, isekai, fantasy adventure commences.

"How a Realist Hero Rebuilt the Kingdom Part 2" – New PV!

The anime is scheduled for January 8.pic.twitter.com/dbZQEVNA6b

The Cast Members of How A Realist Hero Rebuilt The Kingdom

While the first part left us on a thrilling cliffhanger, the 2nd part is ready to astonish the anime-only viewers. Be ready to experience one of the greatest, yet controversial, ending in the history of anime. Let’s see how Mappa ends Hajime Isyama’s masterpiece.

Plot: Eren Yaegar is ready for the final battle. Making a decision on behalf of humanity, Eren desires a peaceful world. However, he has multiple opponents to face. Corresponding to numerous other characters, the final part of one of the most iconic anime series is ready to awe-inspire us.

The Cast Members of Attack on Titan Final Season Part 2

Plot: Revolving around Miyano and his senior Sasaki, the anime gives multiple charming moments. Wondering about his girlish features, Miyano Yoshikazu is interested in Boys’ Love Magazines. One day, his senior Sasaki Shuumie learns about it. Rather than bullying him, Sasaki enjoys Miyano’s nature and grasps every opportunity to get closer.

The Cast Members of Sasaki And Miyano:

Geek Toys’ anime adaptation of Fantasia Sango is ready to debut this January. Featured in Funimation Winter 2022 Line-Up, the anime has a fantasy supernatural theme.

Plot: Ravaging demons and monsters are destroying the Three Kingdoms. Hence, a party of four heroes unites to protect their world. While the heroes have a lot of differences, they stick together to fend off any danger.

The Cast Members of Fantasia Sango: Realm of Legends

Following Fantasia Sango is another anime adaptation of a former game. Liden Films’ Tribe Nine is a unique baseball game.

Plot: Taking place in neo-Tokyo, the series revolves around the Minato Tribe. Leading the tribe, Shun Kamiya (strongest XB) enrolls Haru Shirogane and Taiga. While Haru is a weak-minded person who faces multiple bullies, Taiga has traveled across the seas to become the strongest man in the world.

Nevertheless, the story features Chiyoda Try, led by the mysterious Ojiro Otori, taking control over all other tribes in neo-Tokyo.

The Cast Members of Tribe Nine:

Plot: Travelling in post-apocalyptic Japan, Bisco Akaboshi is a wanted archer. Being infamous for the cause of the apocalypse, Bisco shoots arrows that instantly grow mushrooms after landing. Since fungi spores are the reason for the apocalypse, the authority has drafted Bisco as a wanted criminal.

However, Bisco’s mushrooms make the land fertile. Moreover, he’s in search of a Sabikui mushroom that will devour all the rust.

The Cast Members of Sabikui Bisco:

The Genius Prince’s Guide to Raise a Country Out of Debt (January 11th, 2022)

Plot: After his father’s (King Owen) sudden illness, Prince Wein takes over the Kingdom of Natra. However, he doesn’t have any interest in it and tries to trick other countries to take over the Natra Kingdom. Also, Wein plans everything while making sure that it seems he’s doing his best to protect the country. Hence, a mind-twisting fantasy anime commences.

NEWS: Funimation Debuts Commissioned Visual for The Genius Prince's Guide to Raising a Nation Out of Debt 👑

The Cast Members of The Genius Prince’s Guide to Raise a Country Out of Debt:

She Professed Herself Pupil of The Wise Man (January 11th, 2022)

Yet another long-titled anime will debut in winter 2022. The fantasy isekai anime has a distinctive storyline. Let’s see how Studio-A-Cat plays their dice with this anime.

Plot: Playing the game Arch Earth Online, Sakimori Kagami is one of the game’s nine greasy sages. Since his in-game appearance was that of an old character Dunblaf, Sakimori wanted to change it. However, he gets sucked into the game as Dunblaf but with his new character design. Now, Sakimori is a young woman who professes herself as Dunblaf’s pupil.

The Cast Members of She Professed Herself Pupil of The Wise Man:

Returning after 3 years, the anime has changed multiple staff members. The twisted fantasy, harem, and isekai anime had attracted multiple viewers with its first season. Hence, the expectations for season 2 are certainly high.

Plot: The story focuses around Hajime Nagumo who gets iseakid with all his classmates. However, all his peers get exceptional powers excluding him. Hence, the pupils isolate and bully Nagumo due to his weakness.

Nevertheless, Hajime trains hard in order to achieve everything. Let’s see how he displays his powers in season 2.

The Cast Members of Arifureta: From Commonplace to World’s Strongest:

Next on the Funimation Winter 2022 Line-Up is Jun Mochizuki’s dark fantasy light novel. Studio Bones did a pretty good job with its first cour in July 2021.

Plot: Featuring a duo that heals abnormalities in vampires, the anime has an extraordinary storyline. Noé Archivist (a vampire) joins hands with Vanitas (a doctor) to cure Malnomen (a disease that makes vampires predatory against their will). However, the duo faces multiple obstructions by the Vampires of the Red Moon. Moreover, Charlatan (a force that’s causing the abnormality) also lurks like a threat.

The Cast Members of The Case Study of Vanitas:

Plot: The fantasy anime shows to and fro battles between the Jerle Federation and the Gildllan Empire. Featuring some Primordial beasts and their mana-energy, the anime gives exhilarating battles. On the one hand, an alliance of countries constructs the Jerle Federation that worships the Primordial Beasts. On the other hand, Gildllan Empire has had explosive developments. Hence, both parties have distinctions in their ideologies. Let’s see how their battle plays out.

Check out the newest preview for the Tales of Luminaria anime! Paired with our inspiration song, "ANSWER" by Frederic and Keina Suda, excitement builds as Leo faces Hugo. Who's justice will prevail?#TalesOfLuminaria #TOLUMINARIA pic.twitter.com/IHcEPVil6t

Apart from the anime we mentioned above, Funimation is also set to release The Irregular at Magic High School: Reminiscence Arc, and Lord El-Melloi’s II Case Files {Rail Zeppelin} Grace note -Special Episode. However, there has been no confirmation of the release dates regarding these two anime.

Although most of the fall 2021 anime has ended, some are still running. Hence, they’ll run alongside the new ones. Namely, these shows are Demon Slayer: Entertainment District Arc, One Piece, Platinum End, Ranking of Kings, and Yashahime: The Second Act.

So, here’s the list of all anime Funimation will be releasing in Winter 2022. Let us know which one you are most excited about this season.