Scorn is a much-awaited first-person horror survival game that’s coming this year. Despite being initially revealed eight years back, fans are still waiting to play it. However, we finally have the release date, pre-order details, story, and gameplay information for EBB Software’s Scorn. 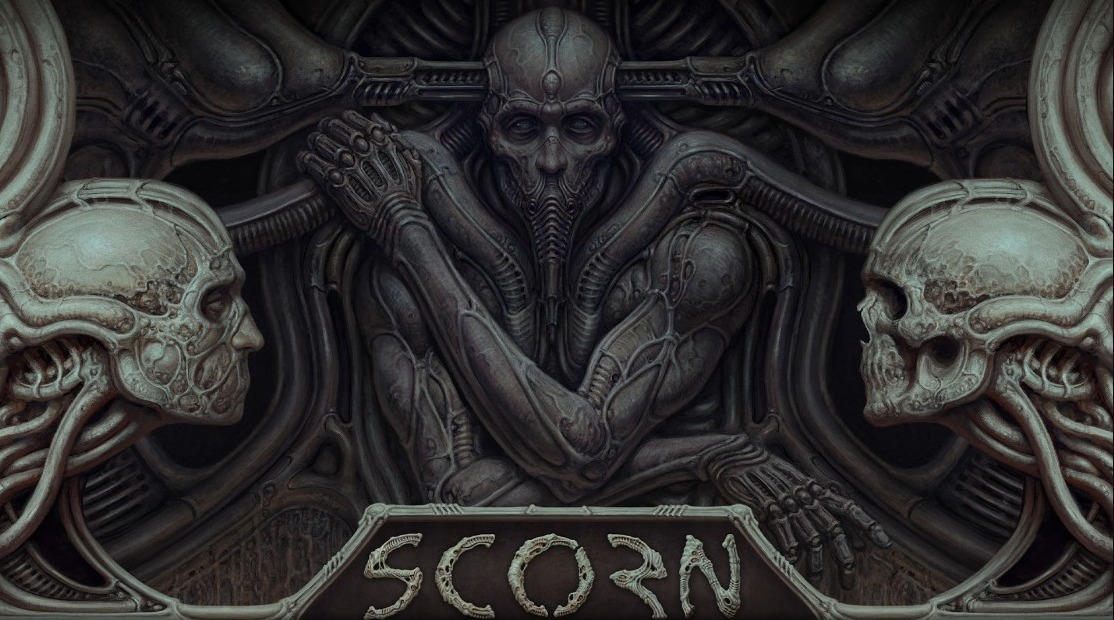 Scorn is the biopunk-themed game inspired by the works of European visual artists HR Giger and Zdzislaw Beksiński, It appears atmospheric, creepy, gory, and everything that players crave from horror survival titles.

You’ll be playing the game as a skinless humanoid lost on a nightmare planet where you can explore horrifying locations and creatures while trying to survive the darkness.

Scorn Release Date: When is it launching?

The horror-survival finally got a confirmed release date at June’s Xbox Games Showcase where we also got the launch date for Gotham Knights and Sonic Frontiers. Scorn is coming on Friday, October 21, 2022.

We are thrilled to officially announce Scorn will be launching on the 21st of October 2022! pic.twitter.com/AL7JP01CLW

Upon launch, players can play Scorn on Windows PC and Xbox Series X|S. Scorn won’t be available on other platforms including PS5, Switch, Stadia, etc.

Scorn was originally revealed in 2014 with pre-alpha footage, and got the complete reveal in 2016. It was scheduled to launch in Autumn 2021 but got delayed due to certain factors. Now, the game’s coming next month and fans are excited.

Scorn will have a Day-One Launch on Xbox Game Pass

Fortunately, Scorn will be included in the Xbox Game Pass for October 2022. It’s going to have a Day-One launch on the game pass allowing members to enjoy the fun game for under $10.

You can also enjoy loads of other fun titles on the subscription alongside Scorn. The Xbox Game Pass lists have been pretty impressive lately. Scorn will be another gem in th extensive collection. 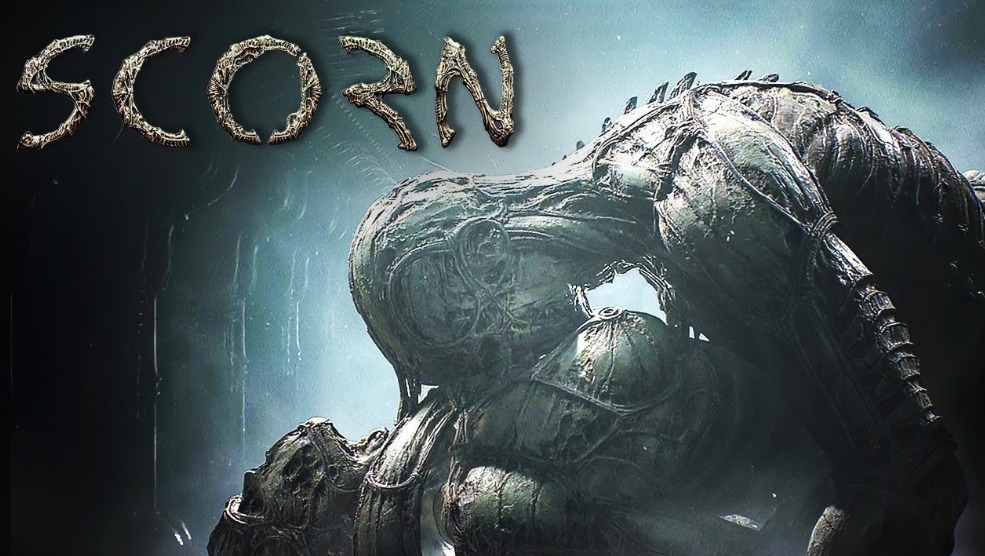 No. Scorn isn’t coming to Sony’s PlayStation 5 and PlayStation 4 anytime soon. The developer currently has plans to make the game available on Xbox and Windows PC only. It’s not even coming to the previous generation, Xbox One.

That’s a piece of bad news for PS players as they won’t be able to enjoy the thrilling horror survival anytime soon. The devs haven’t revealed any plans to make the game available on other platforms either.

Scorn is available for pre-order on the Xbox Store right away for just $39.99. However, if you have a Game Pass subscription, you can play it for free as it’ll be included upon launch. 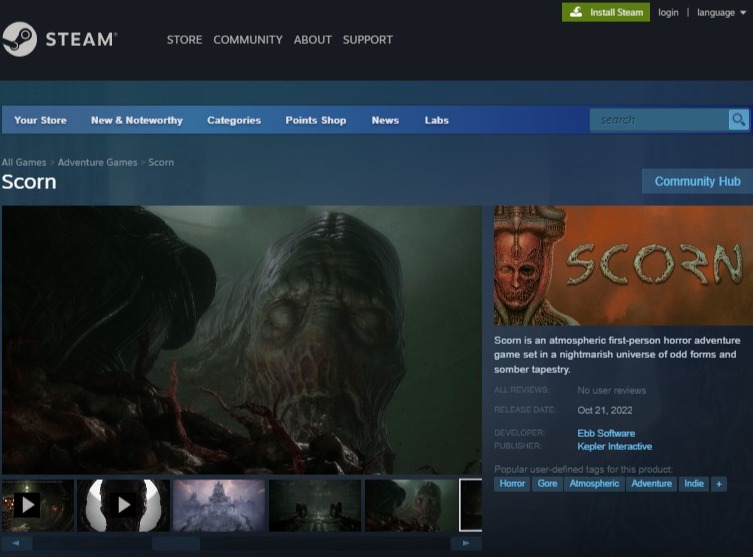 The Deluxe edition includes the official digital soundtrack of the game and a 192-page digital artbook featuring scary art from Scorn creators. It seems there won’t be a physical version of the game.

Scorn Gameplay: What do we know so far?

Scorn is going to be a spine-chilling and gory horror survival that’ll let players get scared from the first-person perspective. The extended gameplay demo of the game reveals there’ll be certain elements from the adventure and first-person shooter genres.

Players will be able to explore creepy environments, solve mysterious puzzles, and get rid of frightening enemies. They’ll also resort to weapons to take down the unfriendly creatures who are enough to steal a child’s sleep for days if shown.

However, you shouldn’t compare it to Doom or other similar titles as it’s fairly different from them. According to the description available on Steam, it’s going to feature a structured series of maze-like regions.

You’ll be playing as a skin-less humanoid trying to not get killed by weird and terrifying creatures. There aren’t any cutscenes available in the game. It won’t inform you when you miss some key items in any area, so you’ll have to pay attention at all times.

What is the Story of Scorn?

The story or plot of Scorn is the least discussed aspect of the game. Since it’s a survival game, there’s going to be a well-scripted plot featuring twists and turns, and mysteries that you’ll unravel throughout the journey.

Scorn will throw you into an already living world where there are bizarre creatures. You’ll have to discover the story as you go through various puzzles and characters having unique narratives. You need to find out what’s going on in the grotesque world. 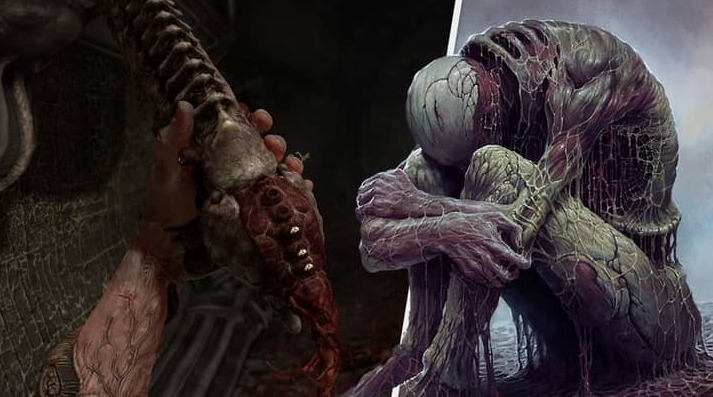 The available footage of the game seems pretty exciting. The trailer shows the main character plugged into a hive mind in a strange environment. There are fanatical settings and characters holding mysteries to be unraveled.

As per the developers’ comments, Scorn will take around six to eight hours to complete. This could vary based on your playstyle as there will be different confusing environments and levels to play through.

A leaker has revealed a creepy design for the main character in Scorn. The leak coming from Twitter user Rebs Gaming shares images of an early prototype version of the player character which seems to be a skinless humanoid wearing no clothes. 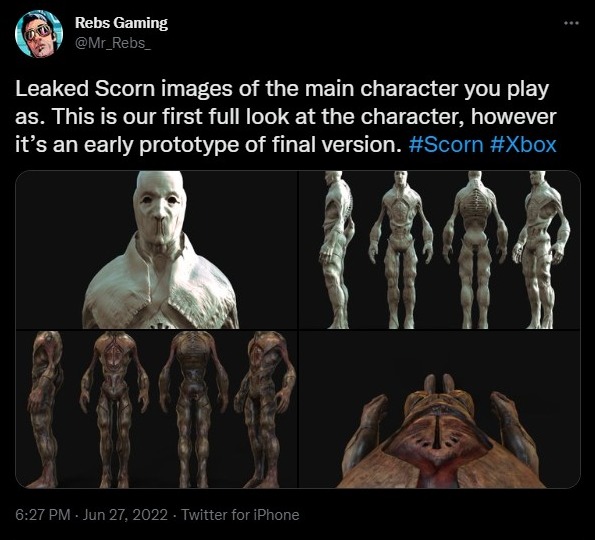 The concept seems to be pretty interesting with dark sockets instead of eyeballs and long slits beneath the nose instead of a mouth. However, you need to remember that this isn’t an official reveal and the final design may vary.

The character is seemingly a combination of tech and flesh with visible exoskeleton and musculature. There is also a large orifice in the chest and a smaller hole where the navel should be.

That’s all we know about Scorn this far. Players are eagerly waiting for the horror survival title to make this year’s Halloween extra scary. What do you think about it? Feel free to use the comment box to share your thoughts.

Gundam Evolution Release Date and Time for PC and Consoles