Wordle’s popularity has shot up like a rocket, and it has given rise to a number of alternatives that are fun, intriguing, and quirky. One Wordle-esque game that is extremely difficult to play is Semantle, created by David Turner, a New York-based software engineer. 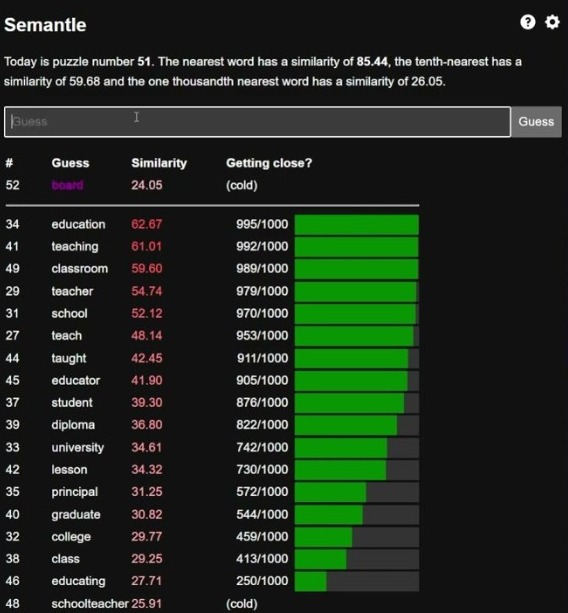 Semantle is also a word-guessing game like Wordle but it is way more different and hard to play. Consider a game that has a “God-level difficulty” mode, you turn it on, and find out that no one has ever conquered it. This Wordle alternative is just like that.

Wordle, which is now owned by the New York Times, makes the whole world guess a mystery word every day under five attempts. On the other side, Semantle follows the same concept, players guess the same semantle (which could be a word, phrase, or a sentence) every day, but you need to guess the mystery answer using its meaning.

In Wordle, you just read the hints and guess the spelling. However, Semantle isn’t that simple. You have to narrow the correct words down by using other words having a similar meaning. There are no clues at the beginning either. Find out more about it here.

Semantle is one of the toughest Wordle alternatives available on the web. David Turner has created it and th game went live on February 27, 2022. Just within a matter of months, the game has flown rapidly in popularity with the graph only going up.

Semantle is based on a similar concept of guessing the “correct” word as Wordle, however, its answer can be any number of letters (or words) long. The players can only find if their guess is in the right direction through Word2Vec, which is the underlying technology running the game.

In Wordle, you simply get Green, Yellow, and Grey tiles, but they aren’t available in Semantle. Instead, you get a “Getting close” indicator with hot and cold ratings. These ratings depict how near or far you are from the mystery word of the day.

In an interview with The Washington Post, Turner said, “It’s so weird. It’s so hard. It’s, like, beyond anything that you think people should be able to do.”

What is Word2Vec by Google?

Word2Vec is a tool owned by Google that powers Semantle. Google describes it as a package that “takes a text corpus as input and produces the word vectors as output. It first constructs a vocabulary from the training text data and then learns vector representation of words.”

These vectors only use a few hundred dimensions to identify a word. It produces a number representing how close the word’s meaning is to the mystery word. Tuner easily achieved what he wanted using his skills in coding and inspiration from Wordle.

Turner explains, “So in Wordle, every position has 26 possibilities, which is not very many, I began to think ‘What else has a small number?’ And I remembered Word2Vec.”

How to Play Semantle?

Playing Semantle is not really simple, but it is definitely a lot more fun if you find Wordle too easy. To play it, just launch a web browser and visit the official Semantle website from here. Upon loading, you will see a brief window explaining the rules of the game.

Your aim is to guess the mystery Semantle (word) of the day which could be of any length. You can start by making a random guess at the game and it will indicate if your response s hot or cold along with a number rating for the guess based on its similarity to the mystery word (answer). 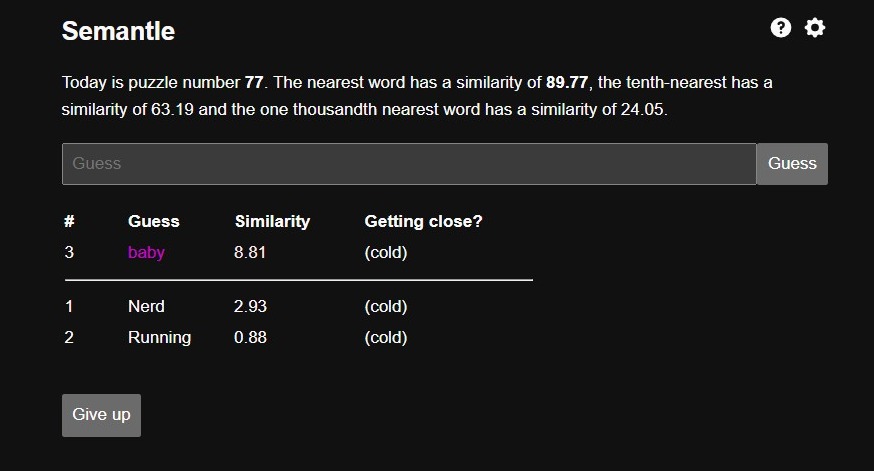 Hot means you are near the word while cold means you are going in the wrong direction. The numbers for ratings can range from 100 to -100  with the former being identical while the latter being absolutely irrelevant. Although Turner suggests the score doesn’t go lower than -34.

If you get a low score, you can realize that the word you have guessed is completely wrong. So, if it is a noun, you can try again with a verb or adjective, and vice versa. You can continue using simple input to eventually guess the answer and solve the mystery.

However, if you can’t guess it. Just click on the “Give up” button (which I have pressed multiple times), and know the answer. You will then realize why it is the toughest of all Wordle alternatives, even tougher than Quordle. 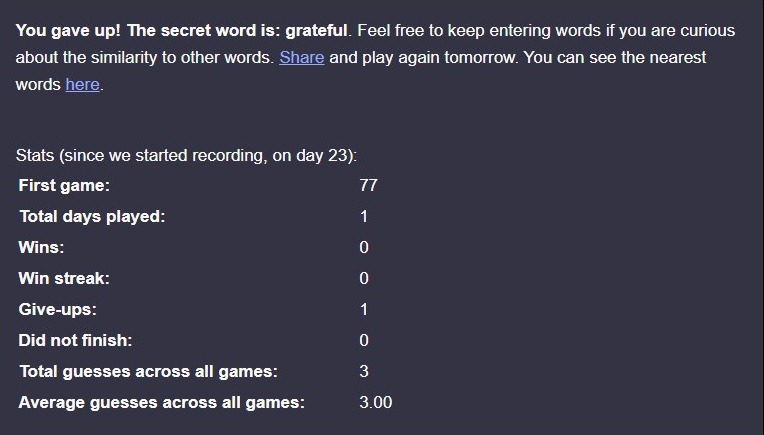 Rules and Regulations to play Semantle

The rules and regulations matter a lot when you are playing Semantle. Thus, when you load the website, it will explain all the rules briefly in a very simple language. This game is created while testing the Word2Vec technology that determines whether two words are similar or not.

It uses the Similarity rating or value to do that, and an indicator telling if your guess was hot or cold. If the guessed word is not of the nearest 1,000, you will get “Cold” otherwise you’ll get “Hot.” Your goal is to keep getting as many “Hot” guesses as you can, and “Cold” guesses will help you achieve that. 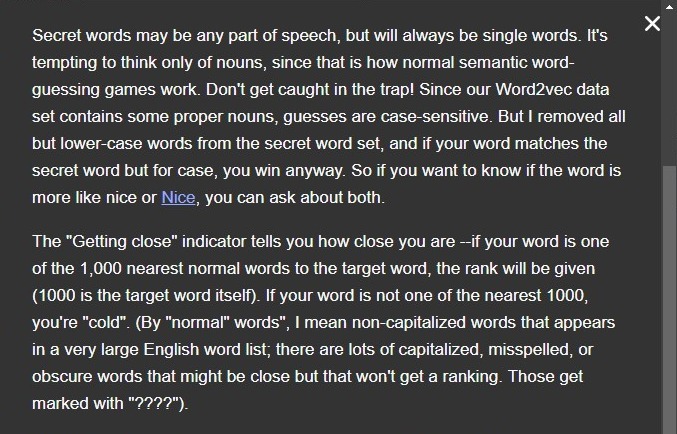 The mystery word can be any part of speech but it will always be a single word. You can think of nouns, verbs, and adjectives, and keep eliminating them based on Semantle’s responses.

You don’t have to worry about the number of guesses as there aren’t any limitations. There is a new mystery word to guess every day which becomes available at 12:00 AM UTC. For more queries about the rules, you can go through the “FAQ” section on th official website.

Can you play Semantle more than once a day?

Is Wordle too easy for you? Try Semantle, which is based on semantics (well, word2vec) rather than letters. New puzzle every day, as seems to be the convention. https://t.co/7wCxoP0OXQ

However, the website allows you to create and play a custom Semantle game if you’d like to have fun with your friends. Make sure you make a playable one and it is actually entertaining rather than frustrating.

Before coming up with this post, I spent almost an hour trying to guess Semantle of the day, but I couldn’t. I’m about to Give up and check the answer now. Were you able to guess it correctly? Let me know via the comments.