Coachella is the most Instagrammed festival in the world and it is currently happening. You can find celebs, influencers and Paris Hilton taking part in the festivities. For some reason, Hilton’s carefree frolics have been going viral lately. 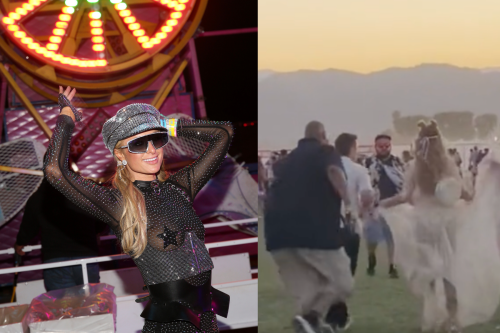 It seems the latest celeb to be making headlines with her festival antics is Paris Hilton. The 40-year-old actress attended the event over the weekend and a clip of her skipping through the festivities as her bodyguard chases after has racked up millions of views on social media.

People are rooting for Paris Hilton after the video is going viral. Some are describing her as “Coachella Queen” after her footage is making people laugh out their lungs. Here’s everything you should know.

Reality TV star and DJ was spotted at the festival today. She was seen in full Coachella regalia running around like a 12 year old left free in a candy store unsupervised.

Her security guard definitely didn’t seem to be as much of a fan of the fest. He was following behind her with some level of desperation while she frolics at the festival in Coachella.

Not all of us know what it is like to have a bodyguard who takes each of your steps as their duty but looking at the viral video where Hilton is sprawling like a child who saw a rainbow for the first time and running towards to eat it, the bodyguard must be having second thoughts about his job for sure.

The footage of Paris Hilton running around chased by her Bodyguard was posted by a Tiktok user, Meghan. She captioned the video “The way Paris Hilton’s bodyguard has to chase her in the desert heat as she skips away.”

Paris Hilton Running Away in the Coachella: The Viral Video

Compared to other celebrities present at the Coachella, Hilton’s outfits looked like a bird or butterfly leisurely fluttering around. After getting comfortable at the festival, she started dancing and spinning with more dancers. She seems to want to explore more and make her run for it before returning back.

The bodyguard kept a slow but relatively close distance as Hilton began to make her way through the crowd. However, after she sped up and began lengthening the physical distance between them, he was forced to run in order to catch up to her.

The video has been met with delight from fans, becoming extremely popular in just a few hours. Meghan’s post about it also got a lot of shares on social media.

Paris Hilton herself has reacted to her own video by commenting, “Sliving” which means slaying and living. Meghan replied to Hilton’s comment by saying, “Our Coachella Queen”.

People from across the globe are reacting to the viral video. Some fans are gushing over her cuteness while others are making memes out of it.

Seems like all of us had a little fun watching Paris Hilton running away at the music festival but we can’t say the same for her bodyguard.