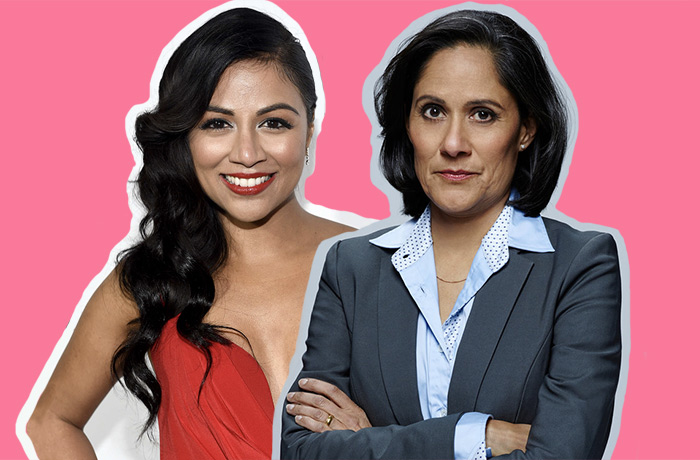 NBC‘s time traveling drama “Timeless” is definitely must-watch TV. It is extremely entertaining and never fails to engross with its weekly trips back to historical events, whether its the Salem witch trials, the battle of the Alamo, or the Watergate scandal.  The show is a great mix of humor, history lessons, and emotional storylines. This week, “Timeless” doubled down on the emotional by focusing on one of its strongest characters.

Sakina Jaffrey plays Agent Denise Christopher on the show. Jaffrey is a formidable, masterful actress, as evidenced by her performances in shows like “House of Cards,” “The Mindy Project,” and “Halal in the Family.” With her role in “Timeless,” she further cements herself as a prolific artist and does wonders in the scenes she is in. She did, after all, have an ace mentor in her mother Madhur Jaffrey, also a legendary actress and author.

Agent Christopher is responsible for the team she has assembled - Abigail Spencer’s Lucy, a historian, Matt Lanter’s Wyatt, a soldier, and Malcolm Barrett’s Rufus, an engineer. The cast has an effortless chemistry, which is what makes “Timeless” such a joy to watch, even when the plot is as peculiar and intriguing as it gets. This trio travels through time in their lifeboat, trying to stop or fix any mistakes in history that an evil organization named Rittenhouse is making in order to take over the world.

So far, we’ve only gotten a brief glimpse into Agent Christopher’s life outside of the team. We know she a great officer, she has a wife and two children, and she isn’t close to her mother because she couldn’t accept her daughter was gay. We also know Agent Christopher is strict, to-the-point, and the team’s moral police. In “The Day Reagan was Shot,” we see what shaped her headstrong yet soft personality.

A wife like Agent Christopher please & thank you ♥️♥️♥️#Timeless pic.twitter.com/NHT5CmMw2Y

As the episode opens, we see Denise in her home with wife Michelle (Marci T. House) and her two kids, Mark and Olivia. The kids wonder why they haven’t ever spoken to Denise’s mother - their grandmother - Ananya Srivastava. It’s probably because she doesn’t even know they exist. Denise leaves for work with a kiss goodbye to her family and a quick prayer to the Lord Ganesha idol in her home. This figure becomes somewhat of a meaningful fixture throughout the episode.

When she gets to work, the team has already traveled back to, as the episode title suggests, March 30, 1981, the day John Hinckley Jr. tried to assassinate U.S. President Ronald Raegan. They assume Rittenhouse’s sleeper agent is trying to ensure Raegan doesn’t survive (as he did), so their mission is to stop him. However, when Denise realizes the time they’ve gone back to, she knows Rittenhouse isn’t trying to kill Raegan. Instead, they’re after her. If she is eliminated in 1981 itself, when she was a young cop in the capital, she’ll never join the FBI or become a Homeland Security Agent or even form this team.

Soon enough, we meet Denise Christopher of the 80’s, played expertly by Karen David (“Once Upon a Time”). David is great in mimicking Jaffrey’s mannerisms while bringing her own unique take to the character. Its not an easy feat to step into the shows of an established role or actress but David succeeds in her task, giving us all the feels.

Tonight at 10pmEST/PST•9pmC I have the honour of stepping into the shoes of Agent #denisechristopher on @nbctimeless which the incredibly talented, and beautiful @sakinajaffrey portrays. Set amidst the backdrop of the 80’s, we travel back to “The Day Reagan Was Shot” I’ve been an ardent fan of Sakina and her work and from the moment we met, she embraced me with the biggest heart and smile. I felt like we had known each other for years. Thank you, lovely lady, for showing me the ropes on all things cop stuff and Denise Christopher. I love you and I can only hope I did you justice in this episode. Your performance in this episode is so inspiring and so moving - just like YOU! Congrats, love! 🙏🏾🙌🏾 Huge shout outs to our amazing writers @arikalisanne and @lgreer1419 who broke through the clichés and bravely, and eloquently, tell the story of a young, South Asian, gay woman. As an actor, one dreams of storylines like this one. • Thank you @alexkalymnios our director, for being sooooo wonderful and challenging me in new ways! I heart you dearly! • Insanely talented female writers and a female director about an inspiring female driven storyline - #girlpower YES!!!! 🙏🏾 Thank you to the great, Shawn Ryan for making this possible and the whole #timeless cast and crew for having me! To the fans of the show, thank you for the warm welcome. Hope you lovelies enjoy tonight’s episode! 😘❤🙏🏾

Denise, whose actual name is Dhriti Srivastava, is a burgeoning officer of the police department. The episode is impactful because we get to see an Indian-American police officer in the 80s, who hasn’t come out to her family yet, and is struggling to figure out her own path in the world.

When she’s injured early on in the episode, Lucy, Wyatt, and Rufus, who are accompanied by Jiya (Claudia Doumit), another engineer on their team and Rufus’s girlfriend, realize they need to protect Denise without letting her know who they really are. Lucy and Jiya befriend Denise only to realize her mother, Ananya (played by Bollywood actress Pooja Batra), is pushing her to marry a family friend, Sunil.

Feeling pressured and unsure of herself, Denise agrees to marry Sunil and considers possibly leaving the job after her wedding. Lucy and Jiya talk to her about this, trying to make sure she doesn’t do something she will regret. Denise confronts them about the dilemma of being gay as an Indian-American woman. Let’s just say, it isn’t a walk in the park. She knows her family won’t accept it. One of her cousins married a white guy and they still don’t talk to her.

Denise also shares with them why she became a cop in the first place. It’s because when she was four and in the backseat of her father’s brand new Cadillac, she saw him get shot and die. A woman officer named Denise Christopher comforted her and that’s when she knew she wanted to protect people when she grew up. To join the force, she changed her name from Dhriti Srivastava to Denise Christopher to make sure there isn’t any bias against her.

Well the cat’s out of the bag… @nbctimeless fans - you were right when you guessed I’d be playing a 21 yr old version of your beloved Agent Denise Christopher a la 80’s style. 😊 Such an honour to play this wonderful role which the incredibly talented, witty and beautiful @sakinajaffrey portrays soooooooo exquisitely. I only hope I do her proud and all the Denise Christopher fans proud too. For a sneak peek, click link in my bio or copy and paste: https://m.youtube.com/watch?v=aW43I1VZNdY&feature=youtu.be This Sunday, it all kicks off! @nbc 10pmEST/PST·9pmC Hope you’ll be tuning in! ❤ #timeless #denisechristopher #agentdenisechristopher #renewtimeless

After confiding in the two of them, Denise has no choice but to come out to her mother because it means saving the day. While we don’t hear the conversation, we see the two women, clad in stunning sari’s because its also Dhriti and Sunil’s engagement party, talking about it. Ananya is visibly upset, slapping Denise in the process. However, we learn that back in the present, Denise and her mom were able to reconnect and she was able to accept Denise for who she is, bond with her grandchildren, and cook them the best chicken biryani ever.

Had to come and sneak a peak at spectacular @KarenDavid channel me as young Agent Christopher. We spent time/drank wine together so Karen could match my voice and mannerisms. The 🍷 worked! Adore this woman. Oh, and @JustDoumit too. pic.twitter.com/9nJLg1eYVy

It’s interesting because the fate of the world depended on this brave Indian-American woman finally coming out to her mother. The “Timeless” writers gave Denise, and in turn Jaffrey and David, a chance to tell this narrative from a distinctive lens, one we’ve never seen before. Denise Christopher is a badass and a remarkable woman. She’s also a lesbian Indian-American woman married to an African-American. She leads a crew of time-traveling saviors. “Timeless” is doing ground-breaking things with this role and we hope you’re not sleeping on it.

“Timeless” airs its two-part season 2 finale on Sunday, May 13. While it hasn’t been officially renewed for a third season, we’re crossing our fingers that NBC doesn’t lose the show and we don’t lose Agent Denise Christopher/Dhriti Srivastava in the process. 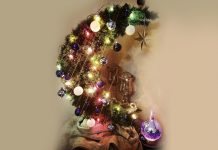 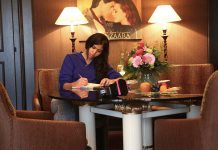 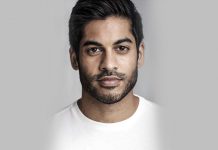