In the world of fantasy films, good and evil are often portrayed as being completely different from one another. The idea of a clash between both ideals forms the basis for many plots.

In most fantasy films, the idea of a clash between both ideals forms the basis for the plot. Good vs Evil is a common theme in movies, with a classic example including The Lord of the Rings trilogy – An epic tale of Tolkien’s fantasy world where good and evil are represented by elves and orcs respectively.

Inspired by this solid concept, Netflix has managed to rule our hearts by giving us some of the finest fantasy films, notably, most of them are adapted from reputed and popular novels including The Witcher, The Umbrella Academy, Cursed, Lock & Key and so many more. 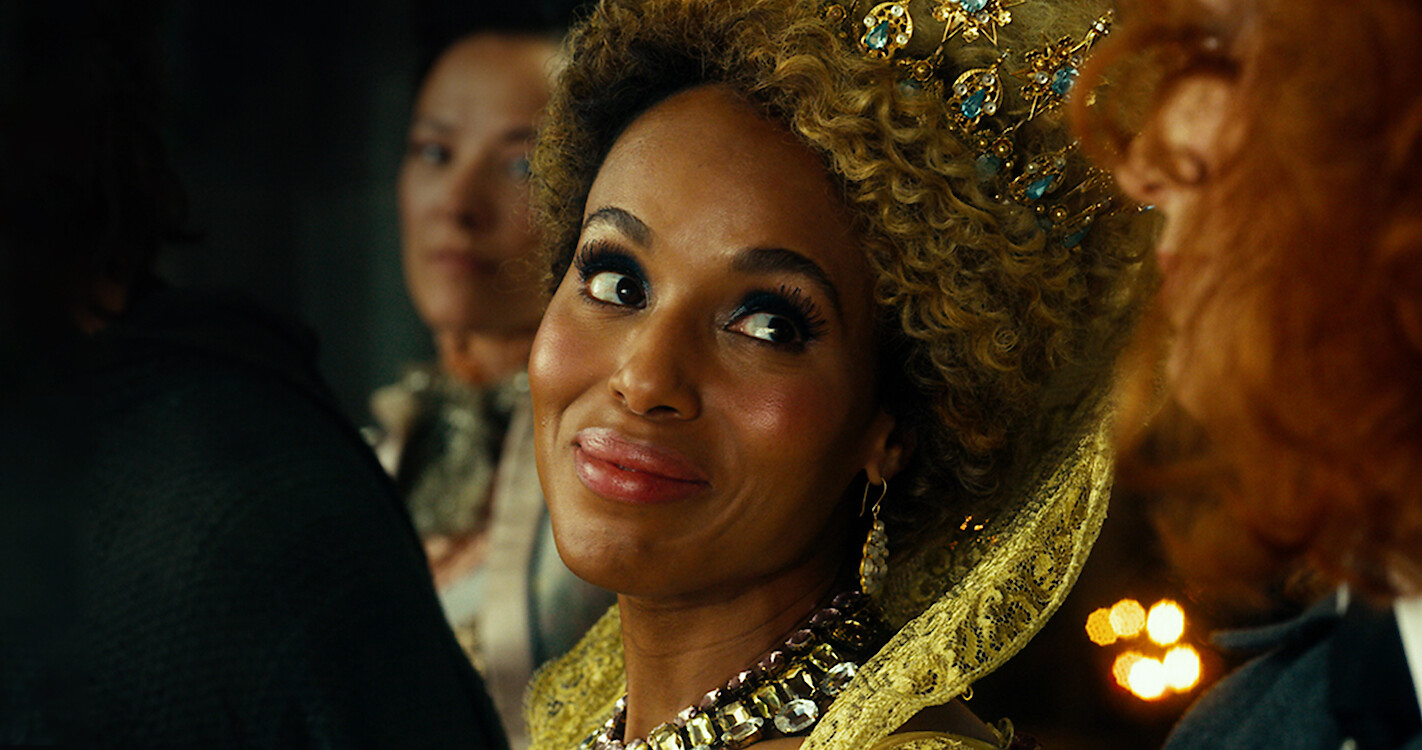 Adding to the vast department of fantasy features, Netflix is bringing another fantasy masterpiece called The School for Good and Evil, a film adaptation based on Soman Chainani’s best-selling books.

Fans who recognise this from their bookshelves will be excited to know the fact that it is soon coming out as a screen adaptation.

And while this won’t be the first adaptation, it is expected to have major twists that differentiate it from other adaptations before. Check out this article to know everything.

Netflix Released First Poster for “The School For Good and Evil”

Many people are looking forward to The School for Good and Evil being released, as the project has been stuck in development hell since 2013. Jane Startz teamed up with Joe Roth’s Roth Films back then to acquire film rights. 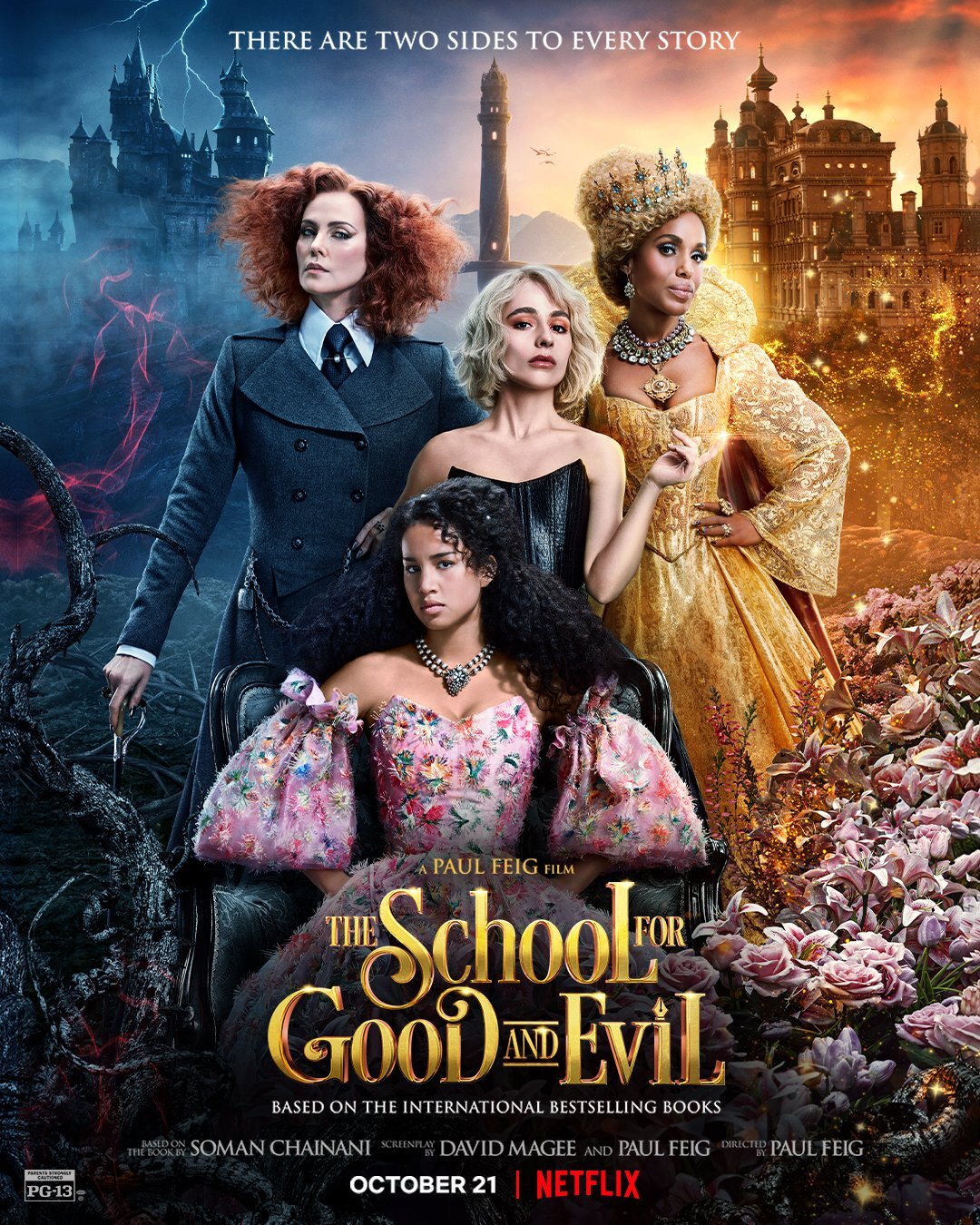 Until, one fine day Universal Pictures won the auction, in addition to paying off Startz and Roth’s scriptwriting, as well as taking on producer Palak Patel. Not much progress was made after that until Netflix came and saved the day by eventually acquiring the rights.

Get ready to attend your favourite school this fall. The School for Good and Evil will be coming to Netflix this fall. This fantasy film stars Kerry Washington and Charlize Theron in their roles of the evil and the good lady, respectively. Join them on their quest to uncover who is trying to keep the two schools apart! 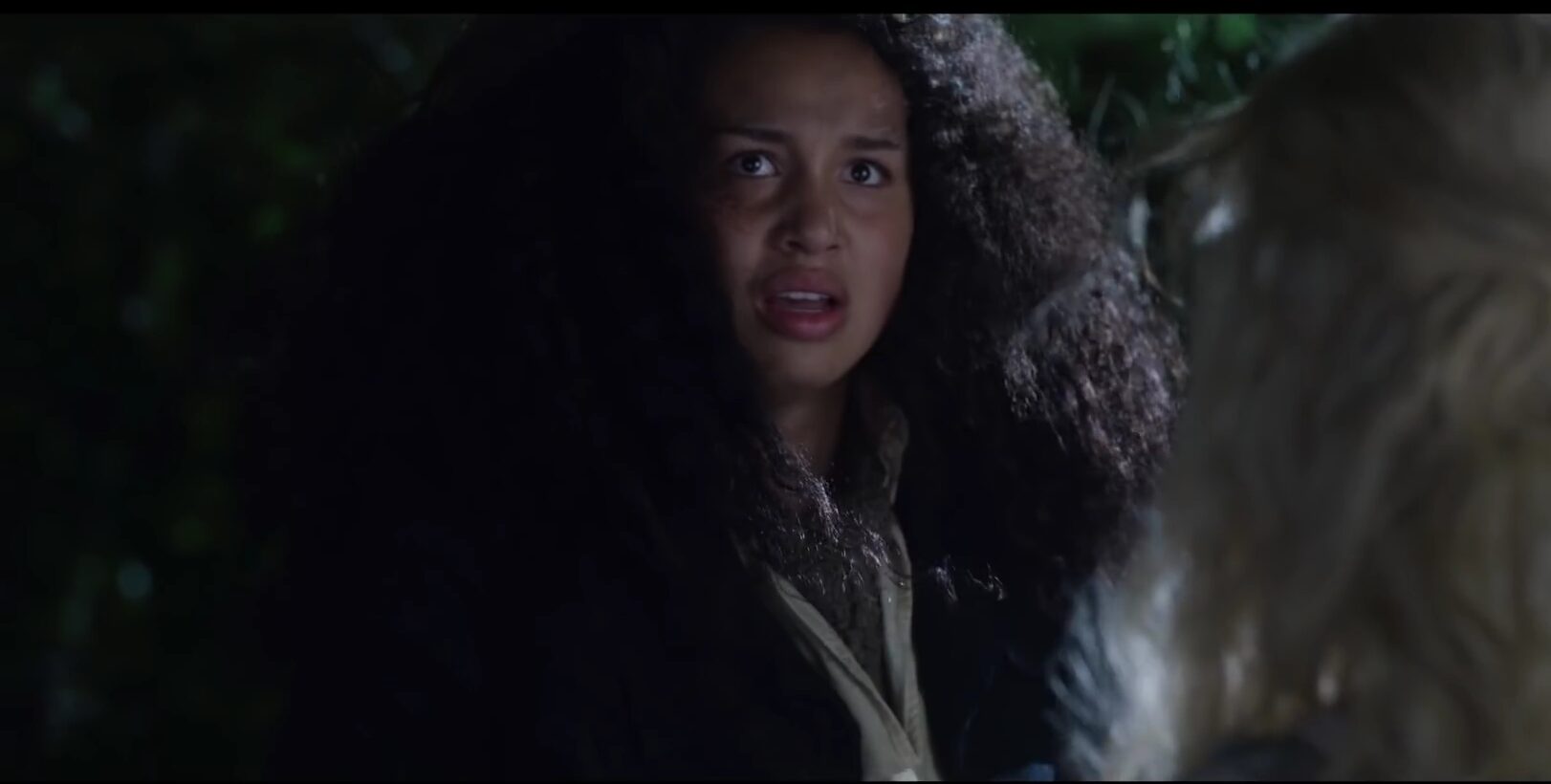 The gorgeous poster shared by the streaming platform features all the beauties Kerry Washington, Sofia Wylie, Charlize Theron and Sophia Anne Caruso in a single frame. One of the standout aspects of The School for Good and Evil is the costuming.

Wearing these outfits really captures the fantastical nature of this world. The difference between good and evil is made very clear thanks to colour coding and reinforced with imagery in the background.

When is The School for Good and Evil Releasing? 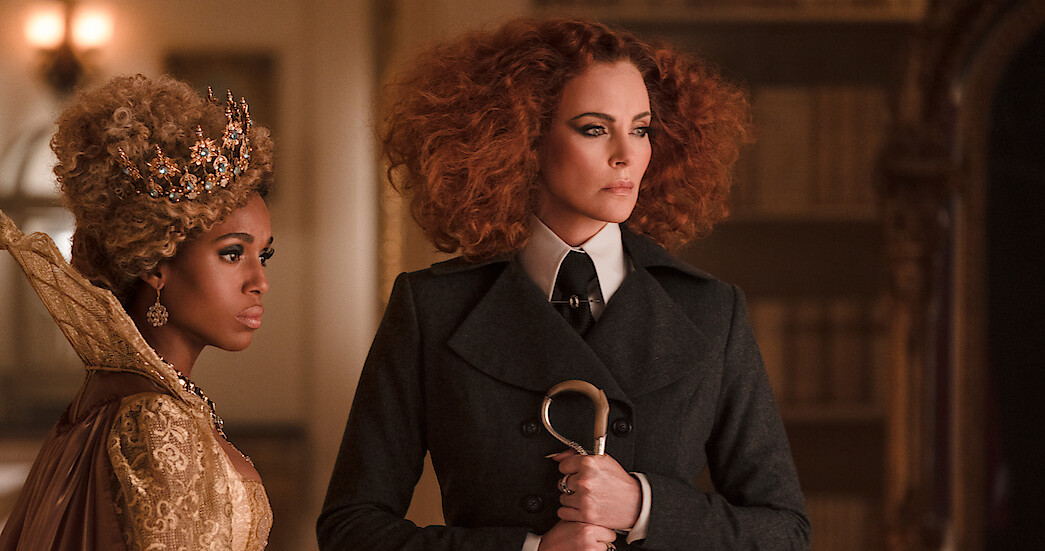 Well, you might have missed everything around the poster considering there were these beauties staring at us through that vivid poster but it came with very specific information.

The poster has revealed the premiere date for the upcoming fantasy film. The school for google and evil is set to release on 21st October 2022 on Netflix.

The School for Good and Evil: What is the film about?

The School for Good and Evil is an upcoming fantasy drama by the biggest streaming giant that has already dived deep into the genre with various big hits. The fantasy feature is based on the best selling novel by the same name by Soman Chainani. 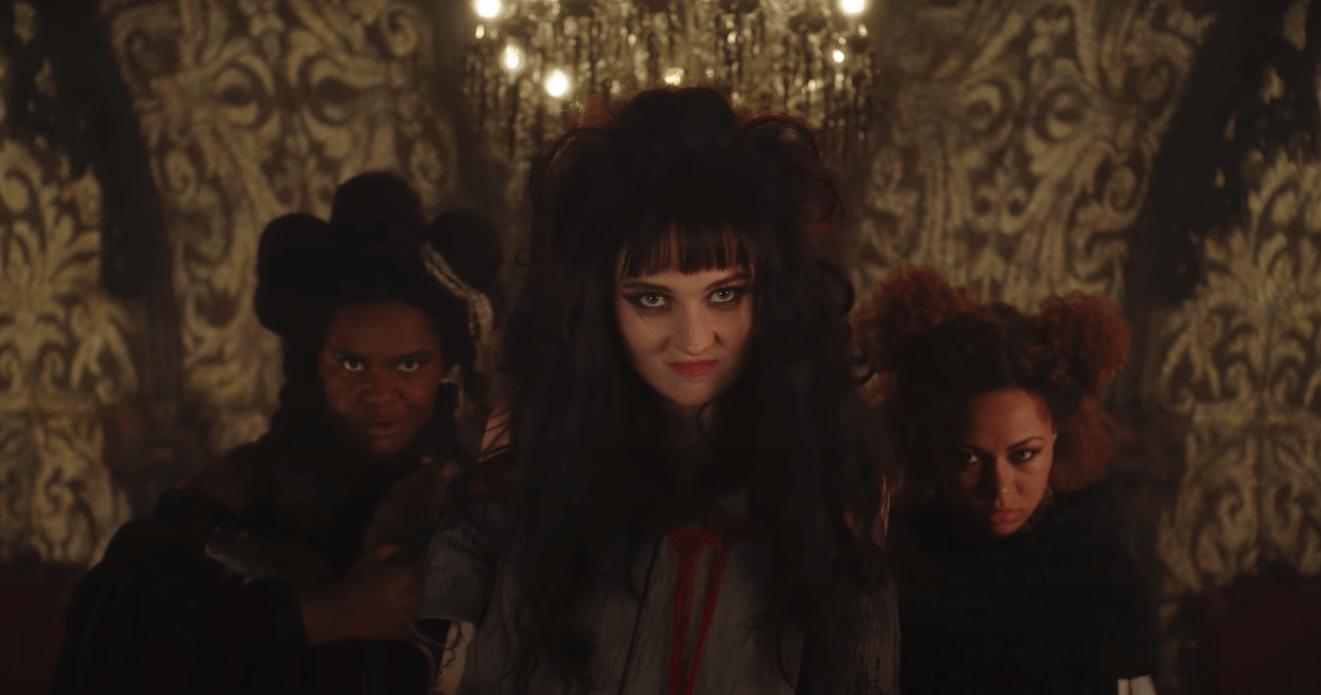 The first book in this six-volume hexalogy, The School for Good and Evil, was published in 2013. The bestselling book has sold more than 2.5 million copies and has been translated into 30 languages across six continents.

The School for Good and Evil follows the lives of two girls drastically changed when they’re taken to a school of magic. One is a grim and creepy girl who wants to make others suffer, while the other dreams of being successful and doesn’t want to harm anyone else. The highly anticipated fantasy drama follows the chronicles of two best friends Sophie and Agatha in the school of magic as they find themselves on opposite sides in a battle at an enchanted school. The school trains heroes &villains who are destined to protect the balance between good & evil.

The author of the original book, Soman Chainani will serve as an executive producer on the adaptation. During the announcement of the film, he said that it’s “very different take” from the book.

The School for Good and Evil: Netflix Released Teaser for the Fantasy Drama

While the full trailer isn’t out just yet, Netflix has given fans a teaser consisting of a voiceover from Charlize Theron. It points to a film that will centre around Charlize Theron’s narration, as she has one of the most interesting voices out there.

The teasers start out featuring the main characters, Sophie and Agatha. The best friends are kidnapped by a flying creature and taken to the School.

While in flight, the young Sophie recognizes that their destination must be the powerhouse school that has made a lot of buzz around the town Excitedly, she turns to Agatha who looks a little surprised and tells her that they are being wished away to the school of her dreams.

The School for Good and Evil: Extended Cast

Netflix is keeping up to its reputation of bringing some pretty solid actors together for an epic masterpiece. The School For Good and Evil is no different. The film boasts a wide list of actors starting from Sophia Anne Caruso playing Sophie.

Sophia Wylie is playing Agatha. The famous Australian actress, Cate Blanchett is joining the cast as Narrator. Charlize Theron will be playing Lady Lesso, the headmaster of the mythical school for evil. Kerry Washington will play Professor Clarissa Dovey, the dean at school for good. Michelle Yeoh will join the cast playing Professor Emma Anemone. Lastly,  The School Master will be played by Laurence Fishburne. He brings the girls to the school which is both Good and Evil.

The film is directed by Paul Feig who is also serving as the executive producer along with Joe Roth, Jeffrey Kirschenbaum, Jane Startz and Laura Fischer.

The good and evil best friends are coming to Netflix on 21st October 2022. Till then, watch this space for more updates on upcoming movies and shows.