Coming from a Steve Carell fan itself, it’s a sad day indeed. After years of binging “The Office” day and night, Netflix graced us with an exciting new show that featured our very own Steve Carell.

But I guess, the universe wasn’t ready to witness his glory as the show is being announced as Canceled after two seasons. 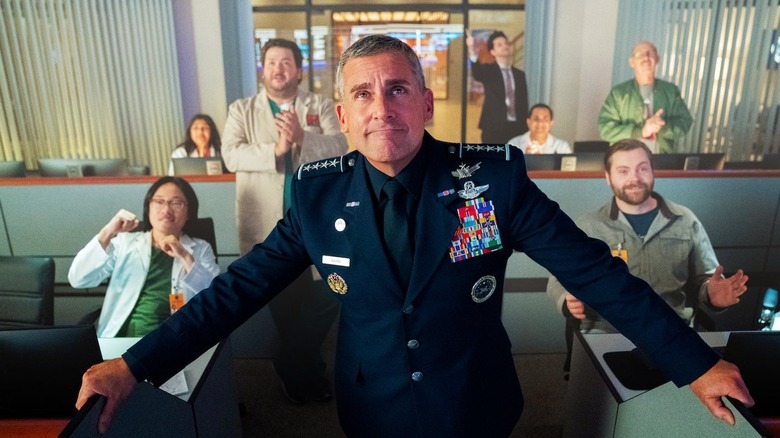 The American comedy show, Space Force created by Steve Carell is ready to draw its curtains after the streaming giant Netflix announces its farewell after completing two seasons.

As hard as it sounds but the network has officially canceled the sow. Here’s everything you need to know.

May 29th, 2020 was one of the greatest days for Steve Carell fans as Air Force Lieutenant General Mark Naird took over Netflix as the Chief Staff Officer of the Air Force.

The Military Comedy series dropped its first episode and made our lockdown days a bit bearable with the insane comedy and the thrilling cast. Space Force is created by Steve Carell and Greg Daniels. The show opened a fun dimension to the field of the Science and Workplace genre with its effective and edgy writing. The series quickly became one of the loved series of 2020.

With characters working effectively towards launching the new satellite, the bombarding of obstacles and fun elements made it to the books of classic Steve Carell comedies.

The latest season of Space Force released its episodes in February 2022. Looks like the folks at the United States Space Force have decided to settle back with the satellite giving fans a final sneak into their world.

For those who seem to have an emotional breakdown like me after hearing some things online about their current favorite show not coming back for season 3.

As much as I hate to admit but it is true. The show is not coming back for another season as the streaming platform Netflix has officially announced. According to a few sources, the head of Comedy at Netflix, Tracey Pakosta has expressed in some of her interviews about the end of Space Force.

Space Force is one of Netflix’s biggest comedy projects to date, starring Steve Carrell. The show was canceled after the cost-cutting process wasn’t enough to keep the show going for future episodes.

Despite the high-cost cuts made to the show, it was still canceled. When season 2 moved production from LA to Vancouver, there was a reshuffle of the staff which resulted in a cut in episode count from 10 to 7.

As much as it was loved by the loyal audience, it still could not pick up in the race for the top 10.

On the bright side, Space Force is still streaming on Netflix, if that makes you feel better.