Rob McElhenney and His Wife Kaitlin Olson Roast Each Other, They Truly are “Couple Goals”

American actress Kaitlin Willow Olson stopped by at the “Jimmy Kimmel Live” show and shared all about her marriage with her husband Rob McElhenney, who was also the host of the show. She spoke about how he loves Ryan Reynolds more, and shared about her Emmy nomination for “Hacks”. Read on to learn more about this conversation between the husband and life. 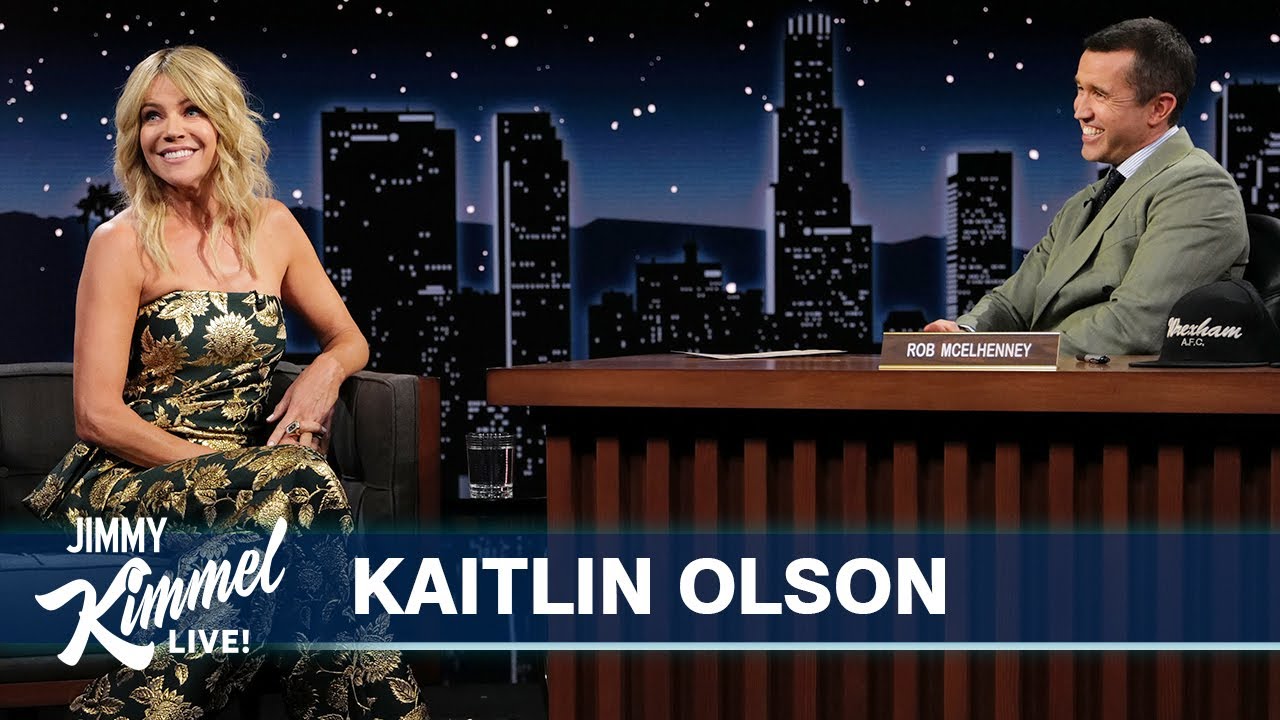 It was a different day for Rob McElhenney on “Jimmy Kimmel Live” as he welcomed his wife, Kaitlin Olson to talk about her new series “Hacks”. She was recently nominated for an Emmy Award for her performance in the HBO series.

They both exchanged some “Love you” expressions with each other and Rob explained how he got to interview so many of his friends on the show but this one is different because he finally gets to interview his gorgeous wife, who is an amazing actress.

Kaitlin read out Rob’s dad’s text sent to her and joked that this is how you share a compliment without sneaking an insult into it, ouch Rob! The message said: This is to both of you. Congratulations Rob, you were amazing on Kimmel, I’ve heard more compliments today from more people about last night than I ever have in the entire run of “It’s Always Sunny In Philadelphia” or “Mythic Quest”.”

She said, “First of all, why am I on this text threat? I wasn’t here last night, there’s no compliment in this for me, this is really I accept some responsibility for the diss of the “It’s Always Sunny In Philadelphia”. She continued, “He should have kept going or gone or the mick or Hacks or Curb Your or anything else.”

After some gossip about their dad, she said that the children are with the nanny and that she is dressed up after six months, so this show is basically a date night for them. Rob instantly got up and kissed Kaitlin. It may have been a date night for the two, but Kaitlin was already ready with her complaint. She recalled Rob about the football game they went to with Ryan Reynolds, and asked him to play that clip. In the clip, as their favourite team scored a goal, Kaitlin tried to hug her husband out of excitement, but Ryan came in the way. Well, it was Rob who preferred hugging Reynolds, just saying.

Katilin said, “Here I am, I turn around to you, you know, to congratulate my husband, and you just go ahead and jump right into the arms of Ryan Reynolds, just aggressively okay, you made it just you saw me, but you turned and jumped right into his arms.” In his defense, Rob stated, “In fairness who wouldn’t want to jump into Ryan Reynold’s arms.” Kaitlin laughed and said, “I would have done exactly the same.”

After pulling each other’s legs, Rob McElhenney congratulated his wife on her Emmy nomination. He said on national television, “I take this opportunity to congratulate you on your Emmy nomination.” She responded, “Thank you, no when I texted you hey I just got nominated for an Emmy, you texted back, “For what?” She even joked that her husband wouldn’t have thought it was for “Sunny” for sure.

Rob told his complaining wife that it was a fair question because ” what we are 17 years later, and there’s always hope.” Rob revealed that this is his wife’s second Emmy nomination for a show. And Kaitlin interrupted, “That has nothing to do with you.” Well from date night, this show was definitely turning into a roast.

After exchanging cute looks, Rob expressed his desire to talk about “Hacks”. If you don’t know, Hacks is an American comedy-drama television series created by Lucia Aniello, Paul W. Downs, and Jen Statsky that premiered on May 13, 2021, on HBO Max.

“Hacks” centres on the professional relationship between a young comedy writer and a legendary stand-up comedy. The series received critical acclaim and won accolades including Primetime Emmy Awards as well as the Golden Globe Award for Best Television Series – Musical or Comedy. In the end, Kaitlin and Rob discussed their marriage that has lasted more than a decade. Rob revealed that people see Hollywood relationships as an Instagram version but being in a relationship is very difficult and the two have had their ups and downs. Well, the two are completing 14 years this September.

Previously, Olson starred in Flipped, which earned her a nomination for the Primetime Emmy Award. Olson has also appeared in films, including Leap Year, The Heat, Vacation,  Finding Dory, and Arizona.