Blockberry Creative confirmed on November 25th that Chuu is no longer a member of the girl’s group LOONA. She has allegedly been expelled from the group after  incidences of misbehavior towards staff members. Blockberry Creative released a statement to set the record straight. It clearly stated “We’re announcing our artist Chuu has been expelled from LOONA as of November 25, 2022. There were many stories about Chuu, but the company and members of LOONA did not say anything for a time to prevent problems concerning the development of the team and fans.”

The record label continued “Because of LOONA’s affection for the team and consideration of the fans, they tried their best to show good performances and content rather than telling the truth.”

Blockberry Creative also mentioned their investigation and findings. “We recently investigated Chuu’s abuse of power, including abusive language toward our staff,” the record label stated. 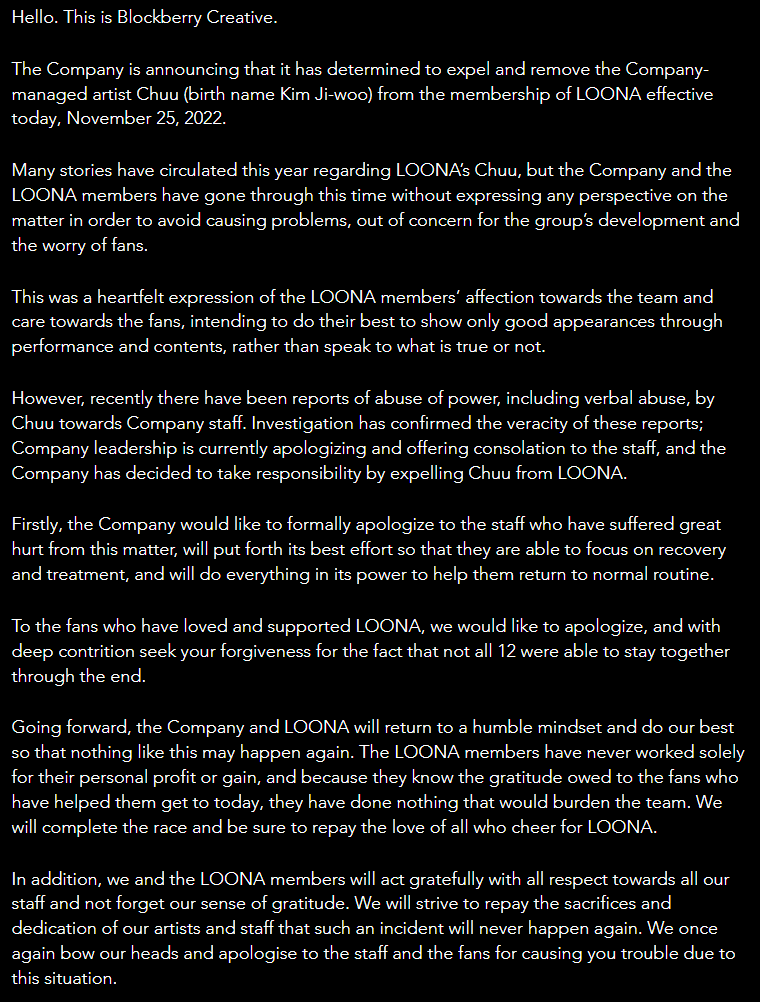 The company further mentioned that, “The company’s head is currently apologizing and comforting staff. We decided to take responsibility and remove Chuu from LOONA. We sincerely apologize to the fans who’ve loved and supported LOONA until now and ask for your forgiveness that the 12 members couldn’t stay together until the end. We and LOONA will do our best to make sure nothing like this happens in the future.”

The Other Side of the Story

The rumors of Chuu possibly leaving the group have been rife for some time now. The news started doing the rounds after she reportedly set up a one-man agency last month and was about to leave the group.

Blockberry Creative was not aware of this. They stated that “We were not aware of Chuu establishing her own label. We’re looking into it. The rumors of Chuu leaving our agency are groundless.”

The Coincidence of Timings and Fans Reactions

The timing of Chuu setting up her agency and then getting kicked off of the band is highly coincidental. There had been some issues about the band members being overworked and having contractual issues. Chuu reportedly spoke up against them and got kicked off because of it. Also, the record label convicted Chuu of being “abusive” towards staff members without giving any proof of it. One user tweeted “Chuu speaking out against being overworked and mistreated and blockberry calling her abusive I need that company shut down.” A photographer who had worked with Chuu also came forward to state that she was warm and encouraging.

Most of the fans that have expressed their opinions on social media seem to be on Chuu’s side. They are also worried about the rest of the girls who are still in the band. If the allegations against Chuu are true, then the record label will have to come forward and disclose them. Till then, it will all come across as being a way to sabotage Chuu’s career.