A love story with individuals from diverse backgrounds, and the songs in that love story movie are indeed affecting.

We can foresee events in most movies, and in the Netflix movie “Purple Hearts,” which just came out, we were able to do so thanks to indications that were scattered throughout the movie.

And those of you who have watched it will be able to understand that as the story continued, we were still able to laugh and cry along with the characters. It maintains a realistic approach and deals with relationships and growing concerns rather than being as idealistic as other Netflix movies.

If you frequently watch a romance movie, it will assist that the plot was less predictable because it wasn’t a predictable Romantic movie. 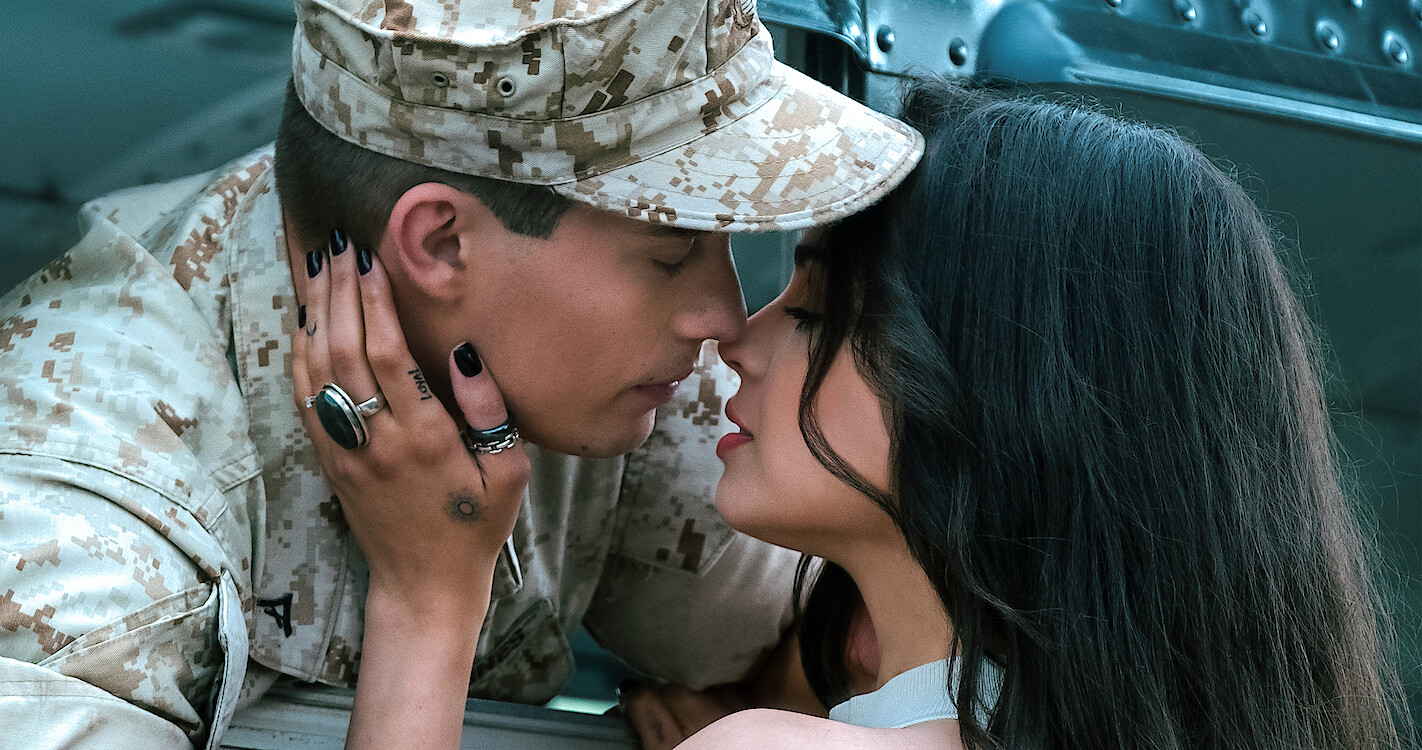 Oh, we didn’t tell you about the plot, did we? The tale centers on the romance between a songwriter and an army soldier. We all agree that it can be incredibly romantic to fall in love with an army soldier, but it also carries the risk of losing them.

But because of this storyline, people always remember this type of love. The actors and actresses did their best to accurately reflect life and circumstances in this movie while yet keeping the plot at the forefront of their performances.

It is a lovely tale of twisted love. It’s difficult to truly predict if they will finally lower their guard towards the end. If you enjoy music as much as the film’s main character does, you can still appreciate one aspect of it even if you don’t like these kinds of movies: the soundtrack.

Through views from movie spectators, the music in this movie has already earned profits. However, there are some songs that are already well-known. 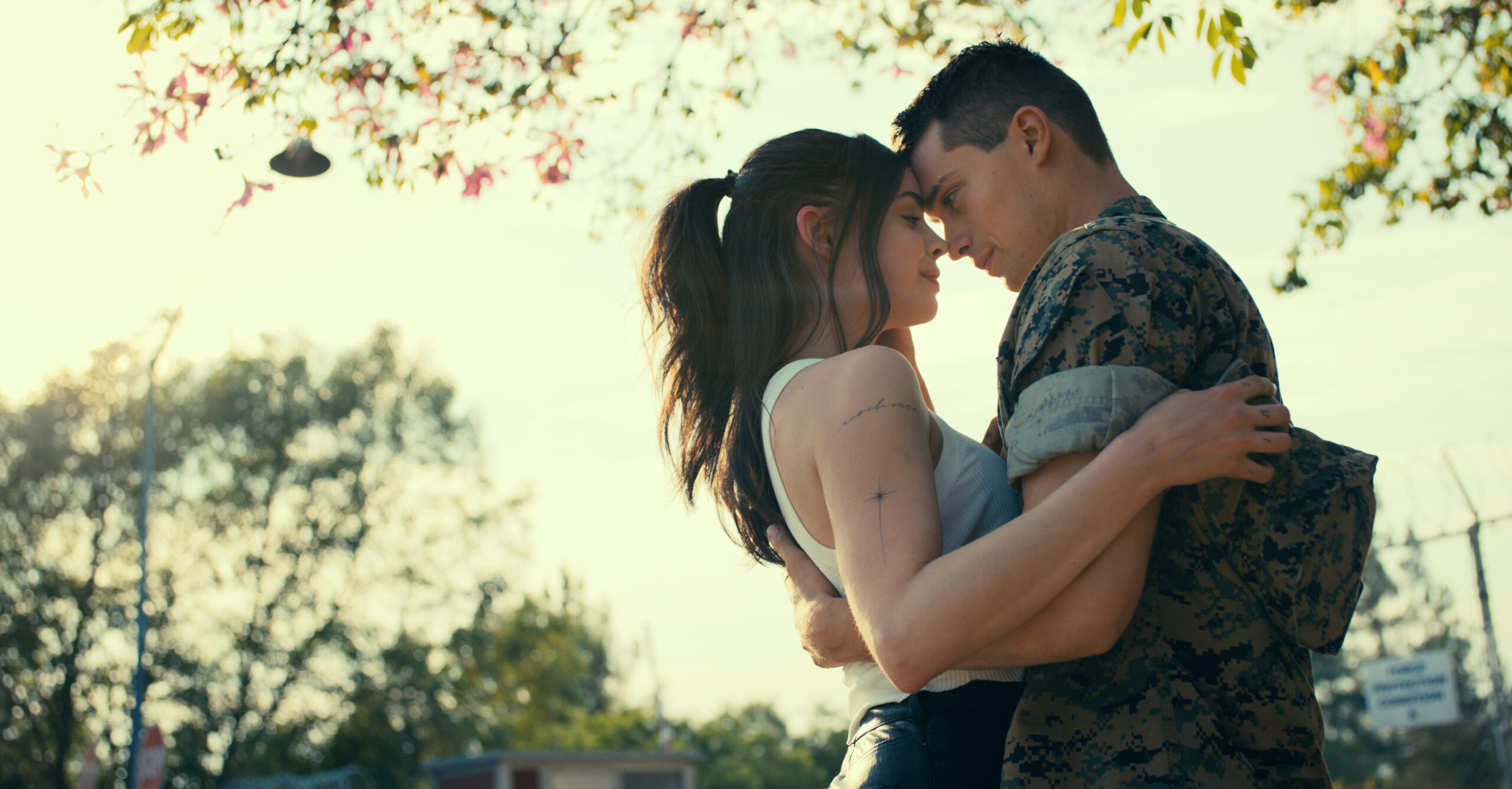 Do you want to know if your favorite song is featured in this movie or do you want some new songs to add to your romantic Spotify playlist? Don’t worry, we’ve got you covered.

1. Blue Side Of The Sky By Sofia Carson

You might not be familiar with this song, but don’t worry—you didn’t miss anything—since it was also the first time everyone was listening to this song in the Purple Hearts movie.

The best part is that the picture of the main character from the movie Purple Hearts is so adorable that you can stare at it for hours while listening to this calming, romantic song.

It will also make your listening experience more romantic and undoubtedly cause you to picture yourself and your partner together. Also, if you don’t have a lover, we apologize for making you feel lonely.

We now feel that Sofia Carson deserves our gratitude for creating music of this caliber specifically for us, or we can say especially for the couples, haha.

Like the preceding song, Sweet Caroline, this one has also titled Caroline. But it’s not sweet; instead, it’s an upbeat rock tune with compelling and infectious funk elements.

You’ll feel a lot of energy from the engaging male vocal performance in this song, which has “making you rethink your life” features.

This song really makes us want to take a summer vacation and listen to it while driving. We’re not sure what vibes it gives you. But we can assure you that they are good vibes.

6. Whatever Happened, It’s Alright Now By Suns Up

It’s something we should all learn, as the title suggests, hehe.

7. Feel It Still By Sofia Carson

We must admit that Sofia Carson is the owner of 50% of the “Purple Hearts” music, haha. And we’re delighted she owns half of it.

8. You Put The Spice In My Life By Dale Chafin

Finally, you have a song that you may dedicate to your family to give them a special and beloved feeling.

9. Don’t You Want Me By The Bashfuls

This song is for fans of 90s music who can play it repeatedly and still not get bored of it.

12. My Love Is Real By Calvin Harris

Calvin Harris’ love may or may not be accurate, but our love for this song is real.

A song to relax to, definitely on your terrace by yourself, hehe.

14. Come Back Home By Sofia Carson

Even though the song’s title may seem sentimental, we promise you’ll need tissues because the music will undoubtedly make you cry.

Well, the same song, with the same feeling but this is different as it is the stripped version, which means the guitar has taken the spotlight along with Sofia Carson’s voice in this song.

16. I Hate The Way By Sofia Carson

Although Sofia Carson has written some extremely emotional songs, this isn’t any less emotional, and it contains the heartful and hyped-up feeling that we seek in every song.

17. I Hate The Way (Stripped) By Sofia Carson

Which version of this song, the stripped-down or the original, do you prefer?

You’ll want to stand up when you hear this song because it was written as a musical remembrance of deceased current or former members of the United States Military.

We appreciate the fact that this movie recognized the efforts and achievements of the Army.

19. Only For A Moment By Lola Marsh

The novel Além da illusion reveals a delightful surprise with this music. We absolutely adore Lola’s stunning voice, the song’s speed, and the idea and rhythm of the music video, and we are sure you as well.

We also had no idea that we would be able to hear this masterpiece in the future, so there. Anyone can be inspired to become a singer and sing their hearts out by listening to Sofia Carson’s soothing voice.

There were various shades to their characters, which made it an interesting watch. The thing you must have liked about the movie was the emotional connection with the characters and the char depths, which many rom coms lack.

Luke’s involvement in the Marines provided the connection that the movie needed. Here’s a little spoiler. Throughout their viewing, many spectators undoubtedly felt like sobbing, especially when Frankie passed away [oopsies, did we just reveal suspense? No, he didn’t die don’t worry Maybe he died, haha].

Everything really comes together at a really great speed, from the movie’s pacing to the subtle parallels to the characters’ emotional states to the injuries. It simply touches it in the right places, which results in a great movie.

We strongly urge you to watch it at least once, and we hope you will agree that it is your favorite. Don’t forget to share your comments on the soundtrack as well as the movie.