Mob psycho 100 Season 3 Episode 9 is set to release on Wednesday, 1 st December 2022. Episode 8 marks the end of the telepathy club arc, with Tome finally fulfilling her dream of sighting a UFO. This paves the way for the last and final arc of the series. The trailer for Episode 9 is already out. Fans can expect some mind-blowing action and a perfect ending for the series.

The upcoming episode will be the start of the final arc, revealing that Mob’s crush Tsubomi is transferring to another school.

Mob Psycho 100 Season 3 Episode 9 release date in the United States is Wednesday, 30th November 2022. The timings and dates will vary on the country you live in. Whereas in Japan the new episode will release on Thursday, 1st December 2022.

The timings of different time zone are as follows: Where Can You Watch The Episode

Viewers can watch the episode on Crunchyroll, Netflix, Hulu, and Funimation.

The episode shows Reigen driving Mob and his friends to Mt.Mud Boat to encounter some aliens because New Yera’s Eve UFO sightings are very common. Meanwhile, Mob is extremely car sick in the front seat, with Reigen comforting him. Tome is upset with everyone as she feels tricked. The worst thing happens when everyone realizes that they have left the hiking trail behind. Takenaka suggests driving the car back in reverse until there is no space to make a U-turn. Mob and shirinhiko then leave to use the restroom However, when they don’t come back after a while. The group decides to look for them and everyone ends up getting lost. Tome gets angry at everyone for not letting her disband the club and she wanted to do it because they never do anything worthwhile. At the top of the mountain, Takenaka reveals that he spent all night studying the ritual to summon the UFO and preparing so that they don’t mess it up. 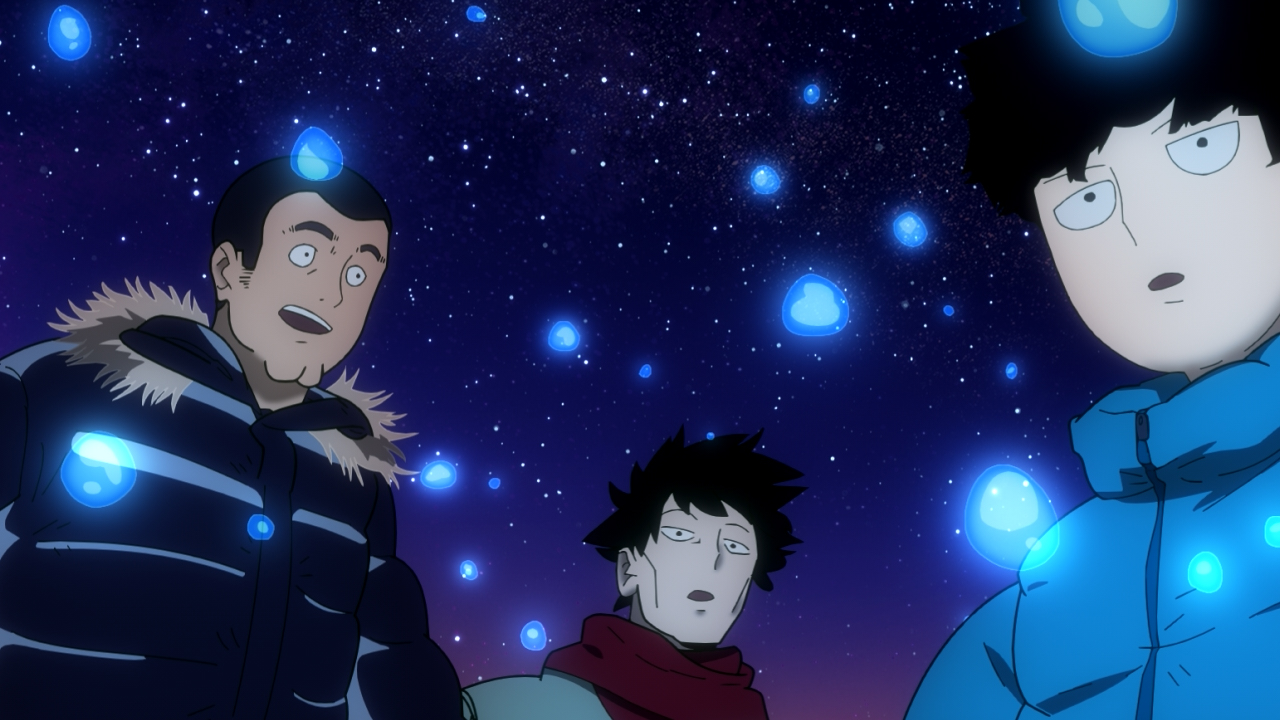 Despite the group attempting the ritual, no aliens appear. Mob attempts the ritual one last time and light appears from behind Tome. To everyone’s surprise, the aliens are seen coming to Earth. The aliens and the telepathy club spend the evening together eating and playing games before eventually returning to earth. Mameta is accidentally left on the ship but they eventually return him to earth. Although this was by far the weirdest episode of the series, featuring pink and friendly aliens. This might be the last time we get to see the telepathy club for now. In the trailer, we see Mob very distressed because he finds out that Tsubomi is transferring schools. Mob is also conflicted about his plans, After Tsubomi transfers from school, mob might focus on his future and start studying.

Sadly we are reaching the finale of the show and might not see Mob again on screen. It will be a very wholesome episode and emotional episode.