This is a rare look at Madonna’s private life, as seen through her photos. It gives us some incredibly personal details about her family and life.

The singer shared several pictures of a Thanksgiving celebration with her large family. During this celebration, she was joined by several of the family members she was close to. 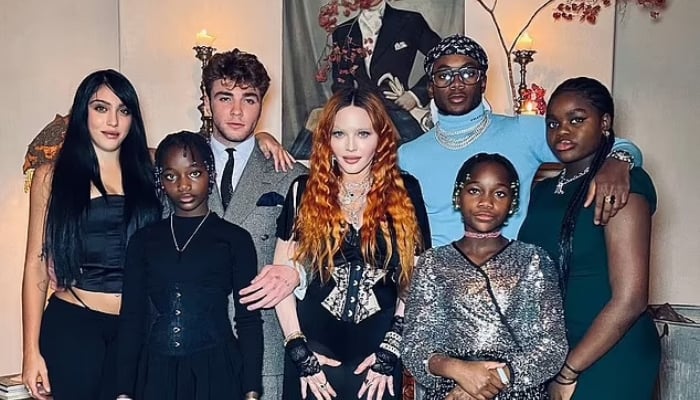 There has been a rare glimpse into Madonna’s family’s sweet celebrations of the Thanksgiving holiday in a special video released today. As part of her Thanksgiving festivities, the Queen of Pop, 64, took to her Instagram account to share photos of her large family. This included all six of her children enjoying the Thanksgiving feast with her. So it was not surprising that the Hung Up singer shared photos with the caption, “What I’m thankful for………….”

On the carousel were photographs of the mother of six posing with all of her children, including her 26-year-old daughter Lourdes, her 22-year-old son Rocco, David, 17, Mercy James, 16, and her twin 10-year-old daughters Estere and Stelle.

She showed off her bold and sultry outfit for the festive season, as well as showing off her bold, close look. A copper-colored-haired Madonna dressed in a dark corset, holding in her hand a glass of wine as she cradled it in her arms, her hair dyed copper.

Added to her festive look, she paired a stunning pair of black boots with a couple of black gloves. In addition to several necklaces and rings, she accessorized her look with several earrings.

In Italy, Madonna Celebrated Her 64th Birthday With Her Family

Madonna was last seen with her family in August when she celebrated her 64th birthday party in Italy with her friends and family. On August 16, the musician turned 64 years old, and earlier this week, she traveled to Sicily to celebrate her birthday. She also praised her son’s birthday, Rocco, who turned 22 earlier this month. 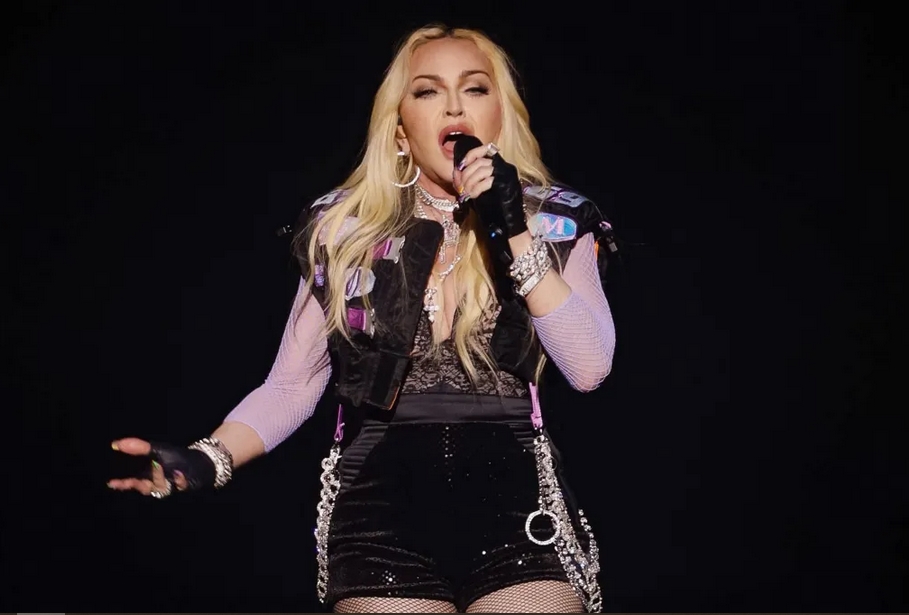 The legendary singer hosted a birthday party for Rocco, the son she shares with ex-husband Guy Ritchie, before celebrating her birthday. There are plenty of pictures from the special day that the singer has uploaded to Instagram in the past few days.

A cream-colored silk dress that Madonna wore was covered in a beautiful pink floral pattern with a cream lining. With the help of a small belt, the outfit was cinched in at the waist to give it a more fitted appearance. In addition to colorful bangles and diamanté necklaces, she accessorized her look with plenty of jewelry, including colorful bangles and earrings.

As well as carrying a small yellow handbag and wearing a pair of strappy gold heels, she had a small yellow bag as well. Madonna chose to wear her long blonde hair in loose waves with a glamorous makeup look and hairstyle.

Choosing a light blue shirt, the birthday boy wore it partially unbuttoned to emphasize the casual nature of the occasion. The birthday boy’s sisters helped him cut a very unusual cake shaped like a briefcase and given to him by his parents as a present.

Madonna’s children also attended the party, including David Banda, Mercy James, Stella, and Estere. As Madonna and her family sipped on wine and fizz and danced the night away during a luxurious family dinner, she hired a band to perform for them during the evening.

Knowing A Little Bit About Maddona

Madonna is often referred to as the ‘Queen of Pop.’ Born into a Catholic family, her mother was a devout follower. However, when her mother passed away, and her father remarried, Madonna suffered through a radical change and became a rebel.

After dropping out of college, she pursued a dance career. After moving to New York, she pursued her dream. She worked odd jobs in New York, including waitressing and nude modeling. In addition, she continued to train in dance and participate in bands. 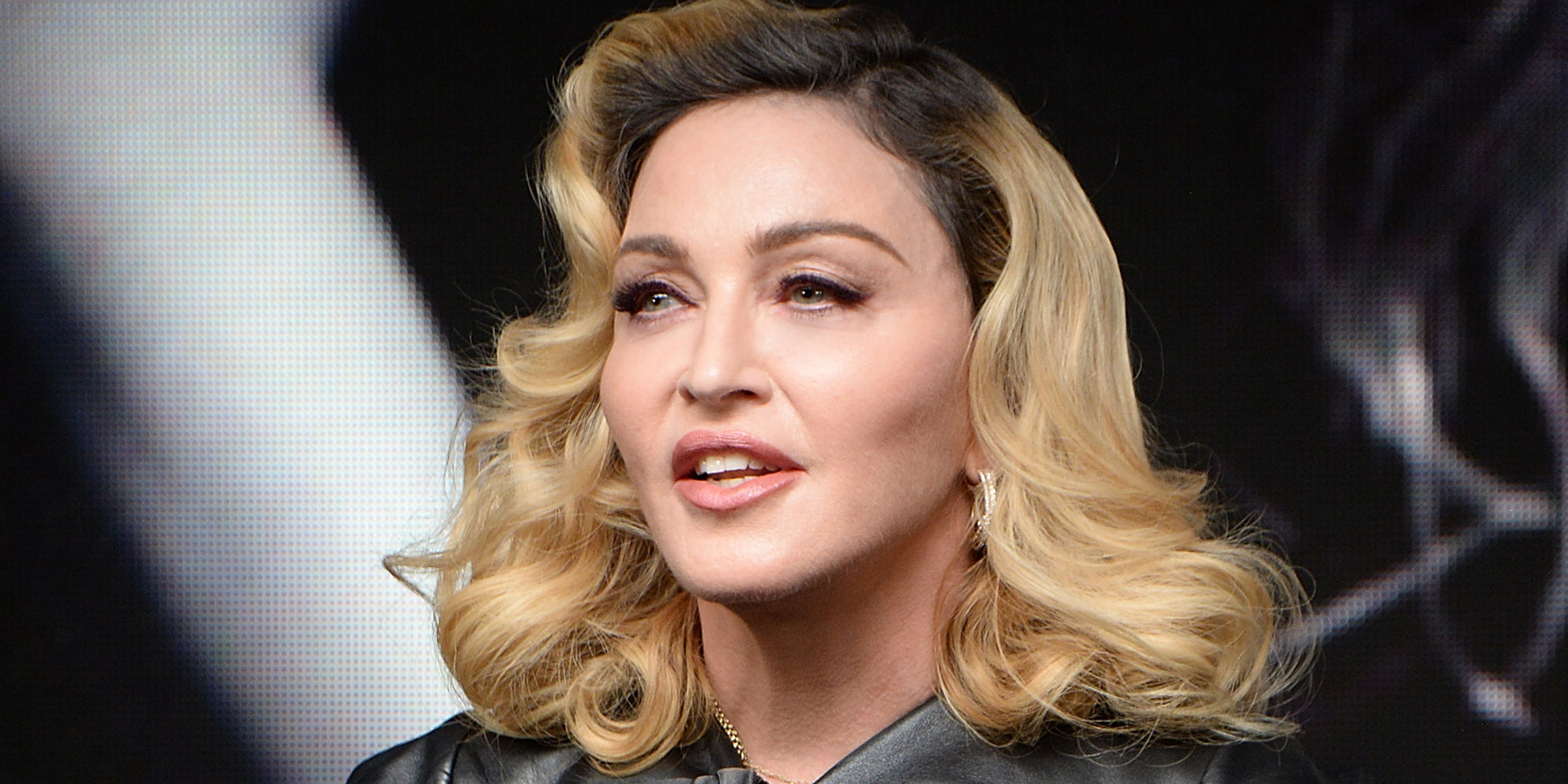 Her talent soon caught the attention of the music industry, and she obtained her first solo contract. He hasn’t looked back since and has steadily climbed the success ladder. Guinness World Records lists her name as a record holder. Uncountable awards have been bestowed upon her. Her songs are considered classics, and she is regarded as a style icon. Despite the controversy, Madonna never backs down from a challenge.

As can be seen from the pictures, the family had a wonderful Thanksgiving, and it is clear from the images that they had a great time. What do you think about the pictures? Comment below and let us know what you think.