The world can’t get over Will Smith’s infamous incident at this year’s Oscars. Will Smith is getting roasted for slapping Chris Rock at the 2022 Academy Awards everywhere. From SNL to memes to Tony Rock’s stand-up tour, it’s everywhere. Now, American actor LeVar Burton cracked some humor as he announced the name of  Nate Bargatze but alerted the audience that he is a comedian. Burton started roasting Will even before the official Grammys show started. Well, he said it concerning the Chris-Will fiasco that happened on the Oscar stage. Let’s get to know what happened? The 64th Grammy Awards took place in Last Vegas yesterday. Noah actor LeVar recalled the moment of the Oscars during the ceremony’s pre-show. He stated how Will Smith slapped comedian Chris Rock for commenting on his bald wife Jada Pinkett Smith.

LeVar was presenting at the Grammy pre-show when he introduced stand-up comedian Nate Bargatze as he was one of the nominees for The Best Comedy Album. LeVar didn’t stop here. He cautioned the audience that Nate is a comedian and said:

“I want to warn you all that our next presenter is a comedian, if you know what I mean. So, I need to caution everybody, remain in your seats and keep your hands to yourself.”

Burton also asked the audience to keep their hands to themselves and not leave their seats. Nate could not hold his laughter as he came upon the stage. The roasting did not stop here. Guess what? Nate entered the stage in a motorcycle helmet. I kid you not, the comedian was wearing a black suit, with a matte black motorcycle helmet. The crowd was already laughing. Nate said,  “They said comedians had to wear these now at awards shows during the Joke Wars.” 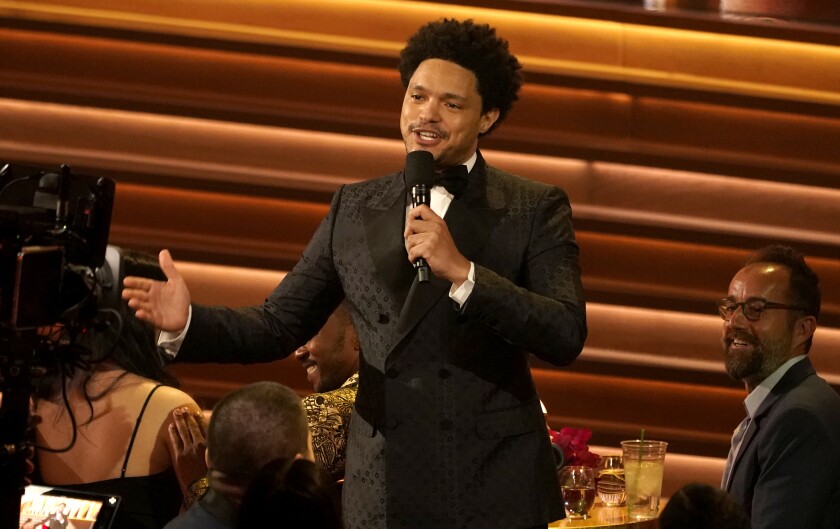 The roasting session did not stop here. This year’s Grammy Awards host Trevor Noah made several taunts at Will Smith taking upon comedians during the official ceremony. He teasingly said, “We’re going to be keeping people’s names out of our mouths.” Now we all know what that means. He referred to the incident when Smith slapped Chris and asked him to keep Jada’s name out of his mouth.

Noah also started this year’s ceremony with light Will Smith jokes and said, ‘Don’t even think of this as an award show. It’s a concert where we are giving out awards, we will be listening to music, dancing, singing, keeping people’s names out of our mouths and we are going to give people awards throughout the night. So let’s get straight into it.”

Will Smith has voluntarily resigned from the Academy for his “inexcusable behaviour” at this year’s Oscar Awards. Well, we don’t know if Jada Pinkett forced Will into this scandal by giving him a side-eye or if it was a voluntary act, but one thing is clear. There is a whole new Comedians’ Union against Will Smith, and they can’t just stop. What do you think?