Joe Keery appeared on The Tonight Show Starring Jimmy Fallon and revealed how his sister encouraged him to start acting. He spoke at length about working as a waiter before getting his Stranger Things big break and his band Djo’s album Decide. Read on to learn all about this conversation. Working As A Charismatic Waiter…

Joe Keery, who plays Steve Harrington, in “Stranger Things”, appeared on the Tonight Show in a crisp beige suit, and spoke at length about being a waiter before making his big break with Stranger Things. Jimmy Fallon greeted Joe Keery and stated that it was cool to meet his sister Caroline backstage.

Joe revealed that it was her birthday recently, and Jimmy responded, “That was a cool story you told me back there.” Jimmy revealed that it was Caroline who encouraged Joe Keery to start acting. Joe narrated the whole story by saying, “I was like a freshman in high school, and she was like the part of the stage crew. You know, sounds and lights.”

He continued, “I was just gonna sleep and skip the stage crew thing, but she was like, come on get up, you know and sort of brought me along. And then, got me into the theatre. Jimmy interrupted and said, “Thank goodness, you stuck with it.” Jimmy joked that now they both are on Fallon so it’s all happening.

Jimmy Fallon then asked Steve, “This is your first big break. Where were you working before that? Steve Harrington replied humbly that he was a waiter before getting into “Stranger Things”. Jimmy asked, “how were you as a waiter.” Joe replied, “I was a pretty good waiter I think.” He then added, “I was a great waiter.” He revealed that in his job, he was pretty charismatic.

…And Then Stranger Things Happened! 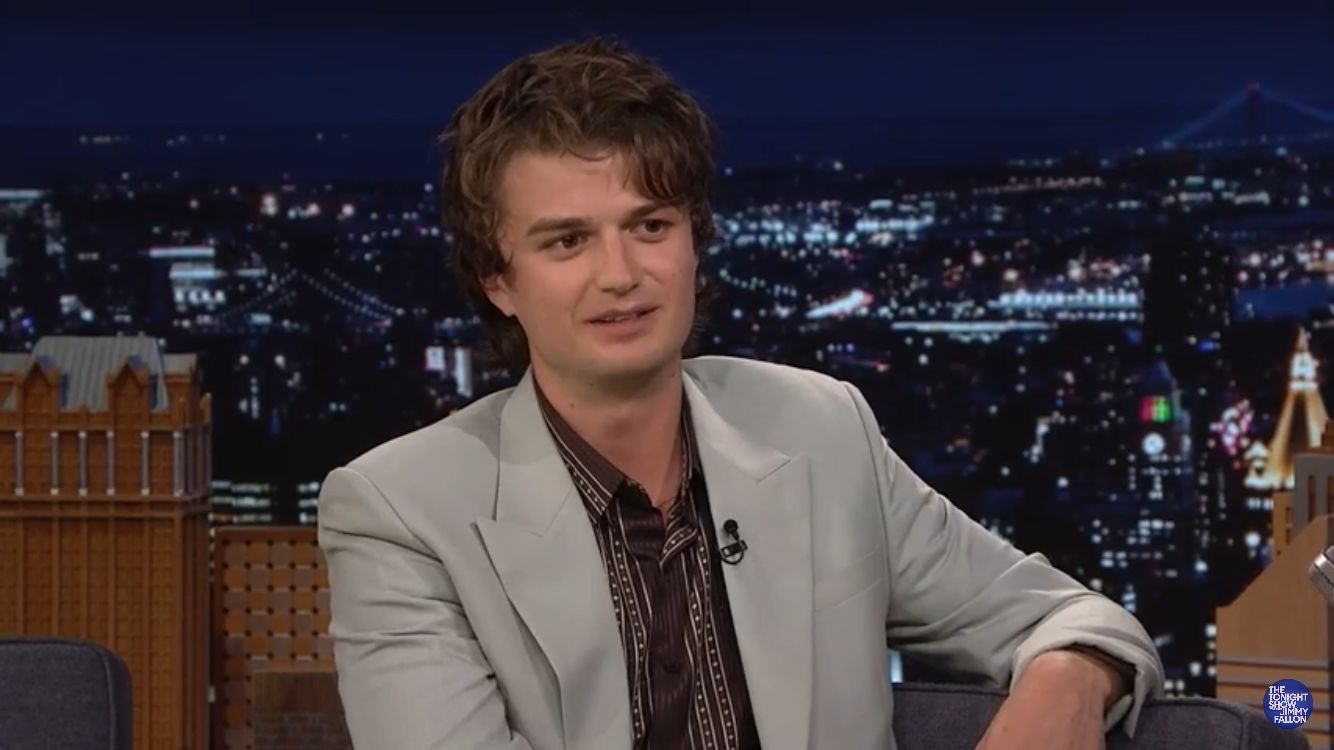 Speaking about the drawbacks, he said, “What I lacked in the organization, I made up for it maybe in delivery, I guess I would say.” About getting into Stranger Things, Jimmy Fallon asked him, “you just got the audition and you were like, were you working when you found out.” Joe replied, “I was, so I auditioned, for you know, they did a big cattle call or whatever. You know they send out across the country.”

He added that we taped it, didn’t hear anything, and moved on. Three months later he received a callback for some different role, I think for Steve, and he was like “Oh man, the jerk boyfriend. He said, “I sent that in, yeah!” Jimmy replied, “It’s hilarious, the jerky boyfriend.”

Joe continued, “….So my friend Matt Williams, he would kind of help me tape all my auditions. And we just, you know, set up the camera. Got, like two mugs, pretty DIY, and did the tape, and then, he worked at the restaurant with me, and so when they did call and I ended up getting the job and stuff, there was a nice moment of like, a silent…He was a food runner and I was a waiter, and got a call in the back and was like, “Oh, my God!”

Joe stated that he shared his happiness that he wouldn’t have to work at the restaurant anymore. He stated that he saw his friend who worked with him, and he was probably stocking the truffle aioli, and “I just gave him like a, I got the job!” Steve was asked by Fallon if he thought he was gonna make it past Season 1 of “Stranger Things”. To this, he replied that “Yea, the brothers wrote–you know–I read one, maybe, episodes of the show, two episodes, and it was kind of like, we read three episodes and then, they had two more and stuff. So it was really, they were building it as they were going.”

Jimmy Fallon said that he cannot imagine the show without Steve Harrington and Joe replied, “That’s very nice of you to say that.” Jimmy emphasises, “You are Stranger Things. We need you. We need Steve.” Jimmy said you make the whole show and I love you. Steve laughed and said, “I’ll tell the Brothers you said that.”

“Stranger Things” Is A Global Phenomenon… 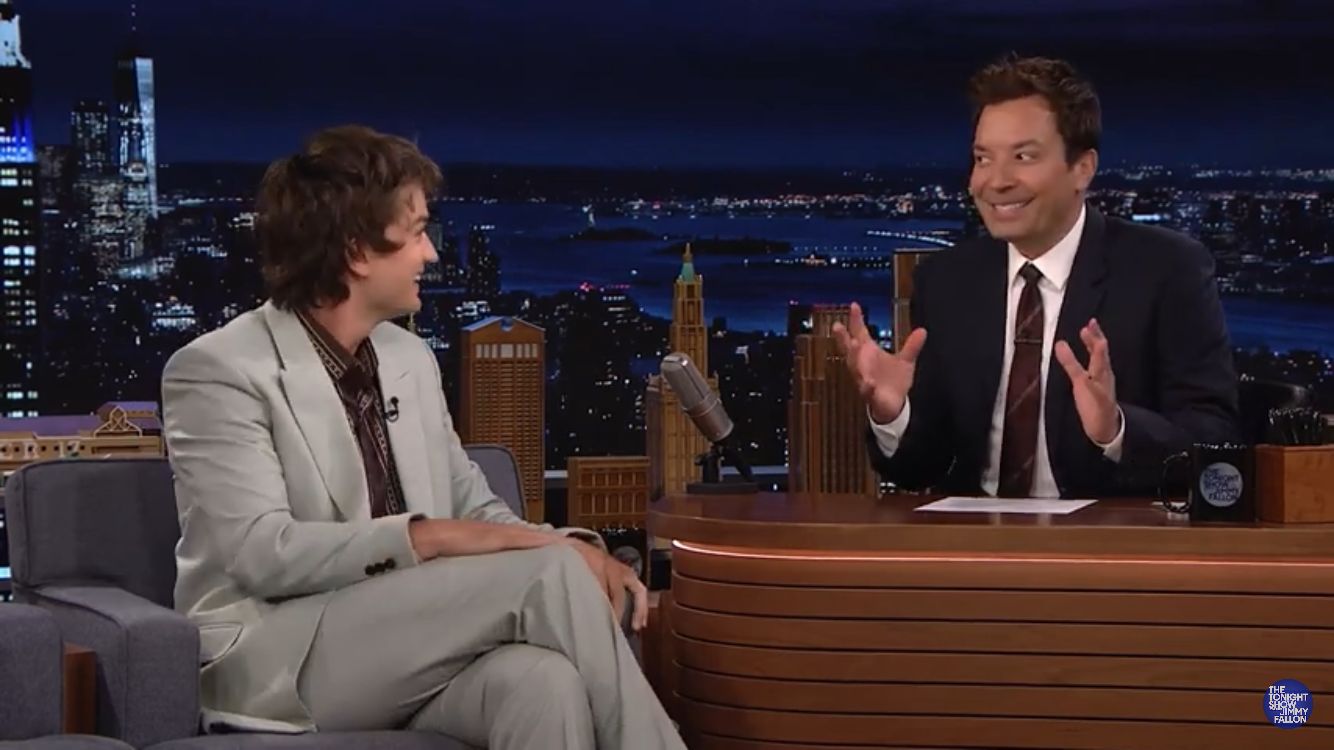 Jimmy revealed that the brothers made him nervous because before Season 4, Netflix put out a billboard, and while showing the billboard which read, “Protect Steve”, he stated that he got worried. Steve revealed that he paid for it and it was pretty expensive. Jimmy revealed that Noah previously came on the show and said, “someone dies”, and asked, “it’s not you.” Joe replied, “No, it’s not me.”

Jimmy asked Joe Keery if he is tough with spoilers and holding in all the secrets. Joe replied, “Not really, not super tough.” Jimmy mentioned that his family or if Caroline knows the spoilers. To this, Joe replied, “Yea, she does.” Joe said she gets scared and my family doesn’t like scary things.

Jimmy was shocked to know that Joe’s family doesn’t watch Stranger Things as it’s a global phenomenon and got nominated for its 13th Emmy Awards. They both consented that the Duffer brothers are the best — they’re creative and fun. Jimmy asked Joe when did he realise that the show is a global phenomenon. Joe replied, “We did some press, my other sister Lizzie came with me, and we went to some press in Italy, and we were kind of walking down the street, and this little Italian girl saw me, cloaked me, I could tell.”

Joe added, “…And then I heard her go, “Stranger Things”! From behind, I was like–that’s a different accent… It feels like such a small thing when you’re doing it down there when you’re shooting and working, but so many people have seen it, it’s crazy.” Jimmys stated in the end that Joe also performs live as a musician and his band’s name is “DJO” which is spelt the same as Joe.