Jenna Ortega’s Inspiration Behind Her Viral “Goth” Dance From “Wednesday”

When Jenna danced on “Goo Goo Muck” in one of the scenes from “Wednesday”, it became an instant hit across the world. Since its release on YouTube, Jenna’s gothy dance video managed to garner over 20 million views. So how did the 20-year-old star come up with this dance? Well, she shared it all with Jimmy Fallon on “The Tonight Show”. 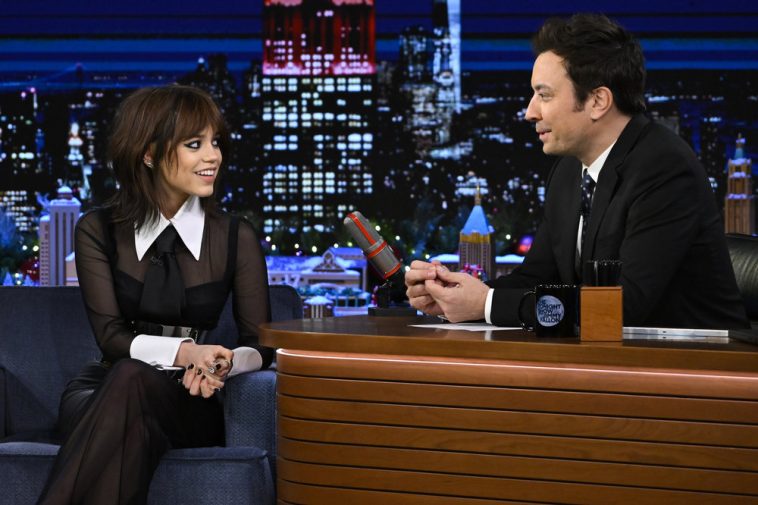 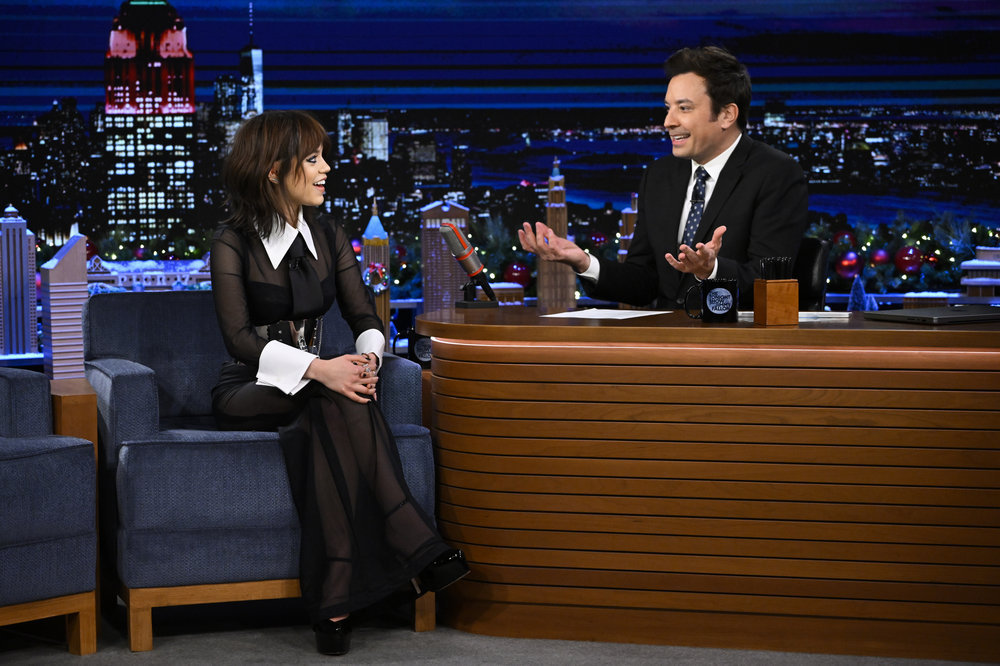 Wednesday fans couldn’t get over Jenna’s (portrays Wednesday Addams),  “Bloody Marry” dance from one scene in Wednesday, where the Nevermore student danced alongside Tyler Galpin, a local coffee shop boy. As Jenna was growing closer to Tyler, little did she know that he is the real Hyde, a monster who was taking over the town of Jericho?

That being said, her dance has become a sensation across the world, and tonnes of TikTok videos have been made imitating her sassy moves. During her recent appearance on The Tonight Show Starring Jimmy Fallon, Jimmy congratulated the little star for the second”Scream” trailer, which has garnered over 3 million views in a day.

As they talked about “Wednesday”, Jimmy revealed that the record-breaking show has become “one of the three shows to be streamed over a billion times”. Can we talk about the dance scene? Jimmy instantly said about her viral dance moves.

“I mean going into it, what happened? Did Tim Burton go, “I have an idea, you do this, you do that?” Jimmy asked about the ‘Wednesday Dance’. Ortega revealed that she read episode 104 pretty early, and “we didn’t know what song we were gonna be using, we didn’t know what the situation was”. She said, “Initially they wanted a flash mob, but I was like, there is no way “Wednesday” would be cool with dancing and encouraging a bunch of people.”

Jenna explained that she had a conversation with Tim about it, and he said, “let’s not do a circle, let her have her own thing.” About a week before they started, Tim chose the song “Goo Goo Muck” by “The Cramps”, which is also her favourite band ever. She was super excited about it.

“He came to my trailer about two days before we shot it, and said, “Hey Jenna I know you said that you wanted to choreograph this yourself–because I refused to see a choreographer–he was like you got it, I am not even worried about it,” she explained. However, Jenna had no plan and she just had two days.

“I was doing so much on the show, I was kicking myself, I felt like such a fool, I was like I am not a dancer, I don’t do any of that. I have no experience in that field,” Jenna added. She revealed that she did not sleep for two days and watched videos of Siouxsie and the Banshees, Denis Lavant in “Beau Travail”. She even found archival videos of goth kids dancing in clubs in the 80s. She also watched Lene Lovich, Nina Hagen, and just anything she could get her hands on.

Inspiration Behind The Dance… On the final day, she decided that she is just gonna do it. “Did you do it super long? Did you do a 20-minute dance video, or was it step-by-step? Jimmy asked. She explained that she paid homage to Lisa Loring, the first Wednesday Addams, doing. a little bit of her shuffle. Netflix told Jenna that this is gonna be a thing on TikTok, but who knew it would be this huge! Guess what? Lady Gaga too performed it in her song Bloody Mary.

She dances her way, at once, awkward, uncoordinated and confident. Wednesday is not dancing to please; she is just dancing!  The dance is choreographed by Jenna.  Viewers have drawn parallels between Wednesday’s Dance and iconic dance routines from earlier years to place Ortega’s creation in the context of popular culture. The New York Times has announced, “The Wednesday Dance Is an Invitation. Be Weird”.