August 1998: They met for the first time The lifelong lovers were introduced by their mutual friends, the then-couple Antonio Banderas & Melanie Griffith, during the Deauville Film Festival in France. Douglas remembered telling Catherine he was going to become her children’s dad half an hour after they first met her during an interview on The Jonathan Ross Show in 2016.

Michael Douglas announced in November 1998 that Catherine was carrying their first child.

December 1999: They got engaged

Douglas proposed to Catherine while they were visiting Aspen, Colorado, on New Year’s Eve.

August 2000: They welcome the new baby

Dylan Douglas was born to Douglas and Zeta-Jones on August 8, 2000, in Los Angeles, about two years after the couple first met. At the time, Douglas’ spokesperson said, “They’re ecstatic.” A little over a year after getting engaged, the couple got hitched at the Plaza Hotel in New York. Following the completion of Douglas’ divorce from Diandra Luker, the producer of films with whom he has a son named Cameron, earlier that year, their marriage began. Celebrities including Jennifer Aniston, Tom Hanks, and Whoopi Goldberg attended the couple’s wedding, which is said to have cost $1.5 million.

The couple decided to stay home with their then-4-month-old baby one month after getting married rather than go on something like a honeymoon. It won’t get any better than this, Douglas told Reuters in a brief update. 2000 won’t be a year that could be forgotten. Traffic, starring Douglas and Zeta-Jones, was theatrically released on December 27 that same year.

Near the end of the production of Intolerable Cruelty, Zeta-Jones found she was expecting their second child.

March 2003: Michael supported his wife at the Oscars When his wife was nominated for and eventually took home the best-supporting actress Oscar at the 75th Academy Awards, Douglas was by her side.

April 2003: Couple welcomed a baby girl into their family 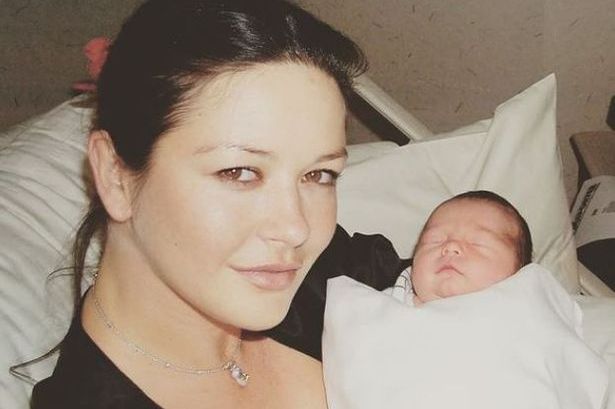 Upon Easter Sunday in 2003, the couple gave birth to a baby girl Carys Zeta Douglas, their second child as a family. The Welsh name Carys means “love” (Zeta-Jones is from Wales). Near the family’s Manhattan residence, Carys is born in Ridgewood, New Jersey. The Christopher Reeve Foundation, a nonprofit devoted to discovering a treatment for spinal cord injury, honored Douglas and Zeta-Jones together. When Douglas received the AFI Lifetime Achievement Award, Zeta-Jones stood by him and supported him.

Stage IV squamous cell carcinoma oral cancer—also known as throat cancer—in the actor from Basic Instinct was discovered to be most likely brought on by the human papillomavirus (HPV).

In an appearance on Today in January 2011, Douglas declared that he was cancer-free. Douglas & Zeta-Jones took their kids to Walt Disney World in Florida for Thanksgiving after Douglas received his final cancer treatment. At the 85th Academy Awards, Zeta-Jones & Douglas walked the red carpet together. At the famous ceremony that year, the couple presented together, and Catherine also gave a musical performance.

Following 13 years of marriage, the Traffic co-stars announced their split. Douglas visited the 1998 Deauville Film Festival, where Douglas and Zeta-Jones first met, soon after their break was made public. 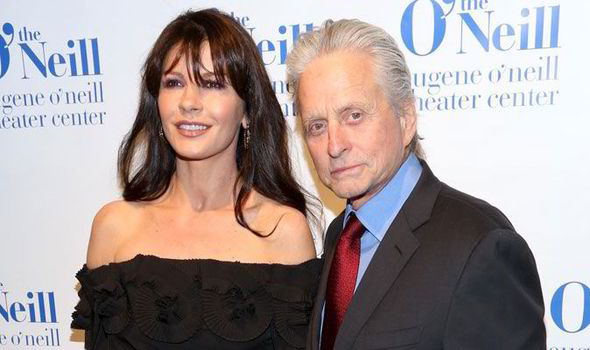 At the 14th yearly Monte Cristo Awards in New York City, Douglas and Zeta-Jones shared the red carpet. The Public Theater in New York City’s opening night of play The Library marked their first outing in public together since their breakup. On again! After that eight-month separation, Douglas and Catherine reunited. The actor from Disclosure stated on The Ellen DeGeneres Show the following year that a relationship may be fixed “if both of you are ready” to put in the effort.

November 2015: Couple celebrated their anniversary together

The Chicago actress honored Douglas on Instagram as she marked her 15th wedding anniversary. A few weeks later, Douglas celebrated their special anniversary at a lunch at Le Bernardin in New York City, where he was presented with an AARP Movies’ Grownups Career Achievement Award.

March 2016: Catherine Zeta-Jones and Michael Douglas visit the beautiful location where he proposed

The Rocky’s, where Douglas had proposed to Catherine 16 years earlier, welcomed the long-time pair back. The Entrapment actor Instagrammed the occasion.

December 2017: The couple became grandparents for the first time

So when Douglas’s son Cameron and his fiancée Viviane Thibes had their first child together, a girl called Lua Izzy, in December 2017, Douglas & Zeta-Jones became grandparents. Zeta-Jones joined in when her husband’s performance in The Kominsky Method earned him a nomination for and victory in the Golden Globe for best actor in a tv series, comedy, as well as musical. He told the media in the press room following his victory that he thought being “in the same industry” improved their bond.

Catherine Zeta-Jones shared a sweet flashback image of the couple to mark their 20th marriage anniversary. Douglas tweeted a photo of himself pecking his wife just on the cheek.

September 2020: Couple celebrated their birthday together

Zeta-Jones rejoiced about Douglas’ nomination for the 2020 Emmys despite being unable to attend the real ceremony owing to COVID-19 security measures.

On their shared birthday, the two people showed each other some respect. Zeta-Jones recognized not only her husband but also other famous people who have had the same birthday as them, such as Will Smith, in her tribute.

The Ant-Man actor uploaded a video montage of images of the couple taken over time.

November 2020: The couple celebrated their 20th anniversary together

Zeta-Jones posted a video montage with many images of the pair over the years in honor of their 20th wedding anniversary. Douglas posted a two-minute audio tape on their long-lasting romance to Instagram at the same time. 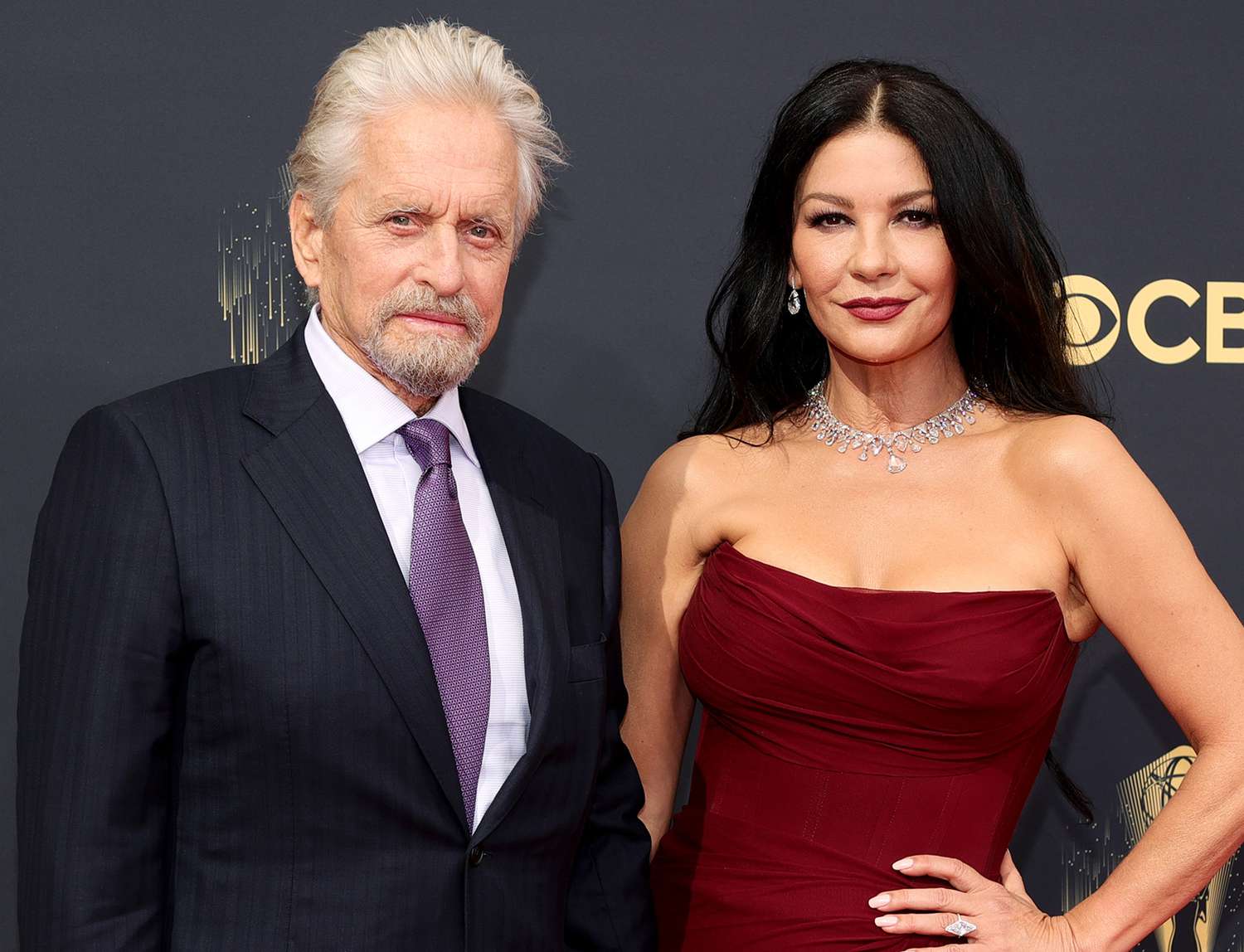 Zeta-Jones could not contain her enthusiasm as she walked the red carpet just at 73rd Primetime Emmy Awards for Douglas’ performance in The Kominsky Method.

Douglas posted images from the pair’s November 2000 marriage to Instagram in honor of their 22nd marriage anniversary.

Catherine and Douglas together make Hollywood’s favorite couple and their fans admire their bond. It is incredible to see them going strong together.

Sonali
Hi! I am a content writer and a copywriter from India. I can write in multiple niches and deliver work within deadlines.
RELATED ARTICLES
Entertainment