Big Bang is Making a Big Comeback: Here’s What We Know So Far

K-pop band Big Bang is all set to make a comeback. The band has given the best surprise to all their fans. The huge announcement was made over the weekend with the help of social media. The fandom of the band has waited nearly for four years for the group’s comeback.

The news regarding the comeback of the band was shared by YG Entertainment and all the four members of the band also confirmed it by posting the same on their official Instagram handles. The fans of the K-Pop band are pretty excited to see the band together after a long time.

“BIGBANG 0AM APR 05 2022,” the photo read. The band shared a blank polaroid photo that was completely pitch black. There was no sign of the name of the track in the Instagram post.

When you look closely at the image shared, you will get to see the name of the boyband, followed by a time, but it is not stated which time zone it is referring to and there is a date of April 5 below the black image. We will get more information regarding their new track soon.

When was the last time Big Bang dropped a song?

The last time we saw the band together was in the year 2018. It’s been a long time since we have witnessed the band together.  Flower Road was their last track after that they took a break from the world of music. They left music in the middle because they had to complete their mandatory military service.

The Big Bang band consists of four members and they are as follows: G-Dragon, T.O.P. Taeyang, and Daesung. Not long ago, a lot of rumors regarding the band completing a musical video were going round in circles.

When was the band supposed to make a comeback?

As per the reports, the Korean band Big Bang was likely to make a comeback in 2020. But things didn’t pan out that way as we all got hit with Covid, followed by a pandemic. The entire world came to a standstill. It was a hard time for people all over the world. 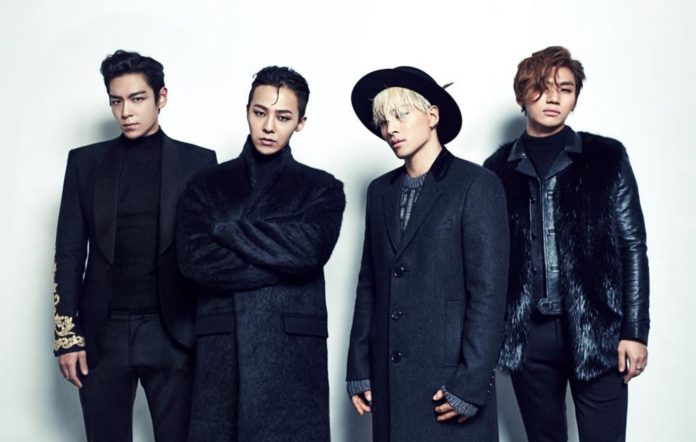 Is T.O.P no longer a part of the boyband Big Bang?

There were a lot of speculations about the T.O.P being a part of the band as his contract is coming to an end this year. According to a close source, he has reported that he would try to be there for the band and participate in the group activities whenever he has the time to.

T.O.P will always be a member of the popular band and he will even support them and be involved in the upcoming release but this is most likely his final release with the band. During an interaction with the press, he said, “In the last few years, I was starting to think that maybe this was the end, and maybe there won’t be T.O.P of Big Bang for a while.”

Just like the fans of the band, we can’t hold our excitement for the new track of the Big Bang. The new single of the K-pop band will drop in April most probably. More details about their new track such as the format of the song and title of the project will be revealed soon. Don’t forget to stay connected with us for the latest updates.