By now, we think all of you know that Mississippi State head coach Mike Leach has been rushed to the University of Mississippi Medical Center in Jackson, Mississippi after “suffering a personal health issue”.

As per various media outlets, at first, the head coach was supposed to be taken to Oktibbeha County Hospital in Starkville. Following the health care, Mississippi State issued a statement to address health of Mike. The statement read, “That is the extent of information that MSU has available regarding Coach Leach’s condition, and the university will make no other comment at this time other than to say that the thoughts and prayers of the university are with Mike and Sharon and their family.”

For those of you who are unversed, let us share with you, the college football coach has been married to his wife Sharon Leach for more than 30 years now. Read on to learn more about Mike’s wife Sharon.

Sharon Leach was formerly known as Sharon Smith. According to various reports, Mike Leach and his wife Sharon Leach are college sweethearts and the two of them have been married for more than three decades.

Back in the day, both Mike and Sharon went to Brigham Young University in Provo, Utah where they met each other for the first time via mutual friends. As per a report by Heavy, Sharon’s sister tied the knot with one of Mike’s former roommates. 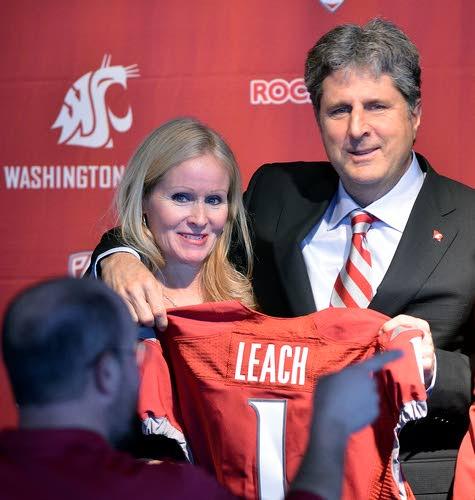 In the past, Sharon worked as an administrative assistant and legal secretary for a total of 14 years full time but later on, she quit the job. On the other hand, when we talk about Mike, he accepted a job as an offensive coordinator at the University of Kentucky, meanwhile, Sharon left her job to become a stay-at-mom and focus on her family.

For their first date, Mike and Sharon went to A&W Restaurant in Provo after a rugby game. During a 2013 interview with Seattle Times, Sharon spilled the beans on the pair’s first date and she went on to say that their first date had not been planned in advance and that they headed out because Mike was hungry.

Sharon told the media outlet, “He probably had the two-for-one coupons and I was the freebie.” While having a chat with the same outlet, Mike said, “It’s almost sacrilegious to anything American and I tried to get them back on track, which I think I did successfully. Sharon was a bit of a tough case, so I had to marry her where I could keep an eye on her a lot more frequently.” In a 2014 interview with Sports Illustrated, Sharon talked about her hubby’s  busy career and said, “I don’t think many people understand just how many hours are spent coaching and recruiting a college football team.”

She further added, “Long ago I realized that Mike’s job was coaching, and my job was everything else. I was OK with that. I loved college football as much as he loved coaching it.”

How many kids do Sharon and Mike have?

In the last couple of years, Mike and his wife Sharon have shifted to many different states like Texas, Oklahoma, Kentucky, Georgia, and Iowa. The pair share four kids: three girls and one boy.

We wish Mike Leach a speedy recovery. You can drop your good wishes for the Mississippi State head coach in the comments section below. Don’t forget to stay tuned with us for the latest updates from the world of entertainment.