What was Jeff Beck’s Net Worth? Earnings of the Famed Rock Guitarist Explored

Unfortunately, Jeff Beck, one of the guitar masters of the rock era has died. The legendary rock guitarist passed away at the age of 78. The news of his demise was confirmed by his representative.

Jeff who was one of the guitar heroes of the 60s took his last breaths on January 10, 2023, Tuesday. He died following ‘suddenly contracting bacterial meningitis.’ Keep scrolling further to know more about Jeff Beck including his net worth. Who was Jeff Beck?

Jeff Beck was an iconic musician and legendary guitarist. He rose to prominence as a member of the rock band The Yardbirds. Soon after, he started his solo career, where he experimented with music from different genres like hard rock, funky blues, jazz, and opera.

The first big hit of the British rock guitarist was the song 1967 instrumental track Bolero Bolero. Besides him, the song also featured future Led Zeppelin members like John Paul Jones and Jimmy Page. The future Who drummer Keith Moon was also a part of the band. He left the band after almost a year. What was the net worth of the British rock guitarist Jeff Beck?

According to a report by Celebrity Net Worth, the net worth of the famed rock guitarist Jeff Beck has been estimated to be around $18 million at the time of his death. All of his earnings came from his musical career which spanned over 6 decades.

Jeff’s music career kicked off with him replacing Eric Clapton as a member of the rock band The Yardbirds. After bidding adieu to the band, he went on to play with some other bands and he was the founder of the Jeff Beck Group. Some of the greatest albums of Jeff Beck are as follows: Truth, Rough and Read, Jeff Beck Group, Blow by Blow, Wired, There & Back, Flash, Jeff Beck’s Guitar Shop, Who Else!, You Had It Coming, Jeff, Emotion & Commotion and Loud Hailer.

When did Jeff Beck form the rock band The Jeff Beck Group?

For those of you who are unaware, let us tell you, Jeff formed the rock band The Jeff Beck Group in the year 1967. The band consisted of Ron Wood on bass, Rod Stewart on vocals, and Aynsley Dunbar on drums, who was soon replaced by Mickey Waller.

Nickey Hopkins joined the band in the year 1968. He played the keyboard. The Jeff Beck Group released their debut album named Truth during the same year. Their second album Beck-Ola came out in 1969. 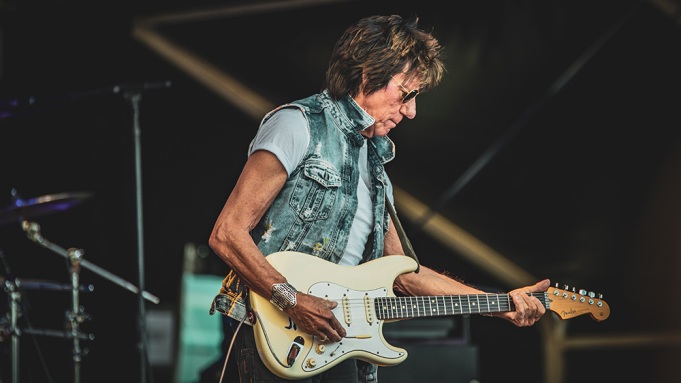 According to a report by allmusic.com, the members of the band used to fight often, particularly on their tours in 1970. Jeff broke the band after Rod and Ron left it to join The Faces.

During a 2010 interview with Rolling Stone, Beck talked about the band and said, “I could see the end of the tunnel.” In addition to this, he also worked with many other artists like Johnny Depp.

May the departed soul rest in peace. Sending love, light, and strength to the near and dear ones of Jeff Beck during this hard time. Don’t forget to stay tuned with us for the latest updates from the world of showbiz.