Steve Burton Separates from Pregnant Wife Sheree Gustin, Says “The Child Is Not Mine!”

The “General Hospital” alum Steve Burton has separated from his pregnant wife Sheree Gustin stating that Sheree has cheated on him after 23 years of marriage and the unborn child is someone else’s. Read on to know about the ongoing drama. Steve says, “The Child Is Not Mine!”

The General Hospital storyline has turned into a reality for the 51-year-old actor who portrayed the role of Jason Morgan in the American daytime soap opera. Steve Burton who shares three children with Sheree Guston from their 23 years of marriage, has separated from her amid his allegations. 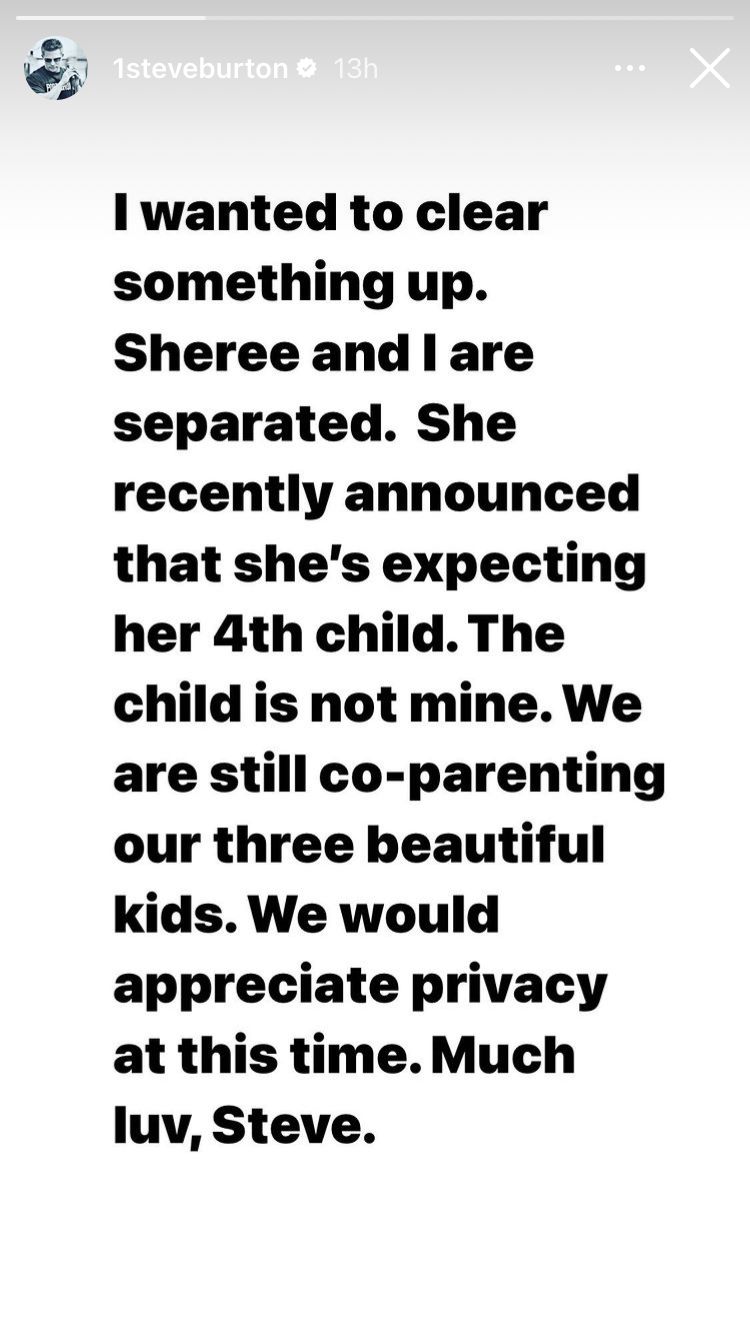 The Indianapolis-born star has alleged Sheree of being pregnant with another man’s child. He took to his Instagram stories yesterday to narrate the truth to his 326k followers. He wrote:

“I wanted to clear something up. Sheree and I are separated. She recently announced that she’s expecting her 4th child. The child is not mine. We are still co-parenting our three beautiful kids. We would appreciate privacy at this time. Much Luv, Steve.”

Steve Burton hasn’t revealed the actual father of Sheree’s child but has decided to co-parent their three children: daughters, Makena (18) and Brooklyn (7), as well as son Jack (16).

Sheree recently announced her pregnancy on her Instagram stories, sharing a picture of herself holding her baby bump. She captioned the image: “Life is full of surprises!” Well, I don’t know about my life, but phew, Steve’s life is truly full of surprises. The actor married Sheree in 1999 after the two met on the set of “General Hospital”. Neither Steve nor Sheree have confirmed how long they have been separated. There is no word from Sheree about the said allegations. But as they say, silence speaks louder than words.

Steve was fired from General Hospital In November 2021, Steve Burton was fired from the US soap “General Hospital” after he decided not to take up his Covid-19 vaccination. The series’ major character Jason Morgan appeared in more than 2000 episodes of the daytime drama between 1991 and 2021.

Steve admitted back then that it “hurts” to have lost his job due to a vaccine mandate after his bid to be exempted from the jabs was denied. He previously shared an Instagram video wherein he stated:

“I know there’s been a lot of rumours and speculation about me and ‘General Hospital’, and I wanted you to hear it from me personally. “Unfortunately, ‘General Hospital’ has let me go because of the vaccine mandate.

“I did apply for my medical and religious exemptions, and both of those were denied. Which, you know, hurts. But this is also about personal freedom for me. I don’t think anyone should lose their livelihood over this.”

Steve contracted Covid-19 in August last year. He also said that he will always be “grateful” to the show that got him so much stardom. Reliable sources suggest that the actor will appear in the second season of Peacock’s spinoff Days of Our Lives: Beyond Salem, which premieres on July 11. What do you think about Steve’s decision to separate from his wife?