This week, “Saturday Night Live” chose to entertain its audience with the most absurd Kanye West incident: Getting kicked out of Skechers head office after showing up unannounced, and that too in front of the company’s Jewish boss amid his anti-semitic rants. Well, SNL did not leave Skechers too and described it as a “hip, edgy company”. 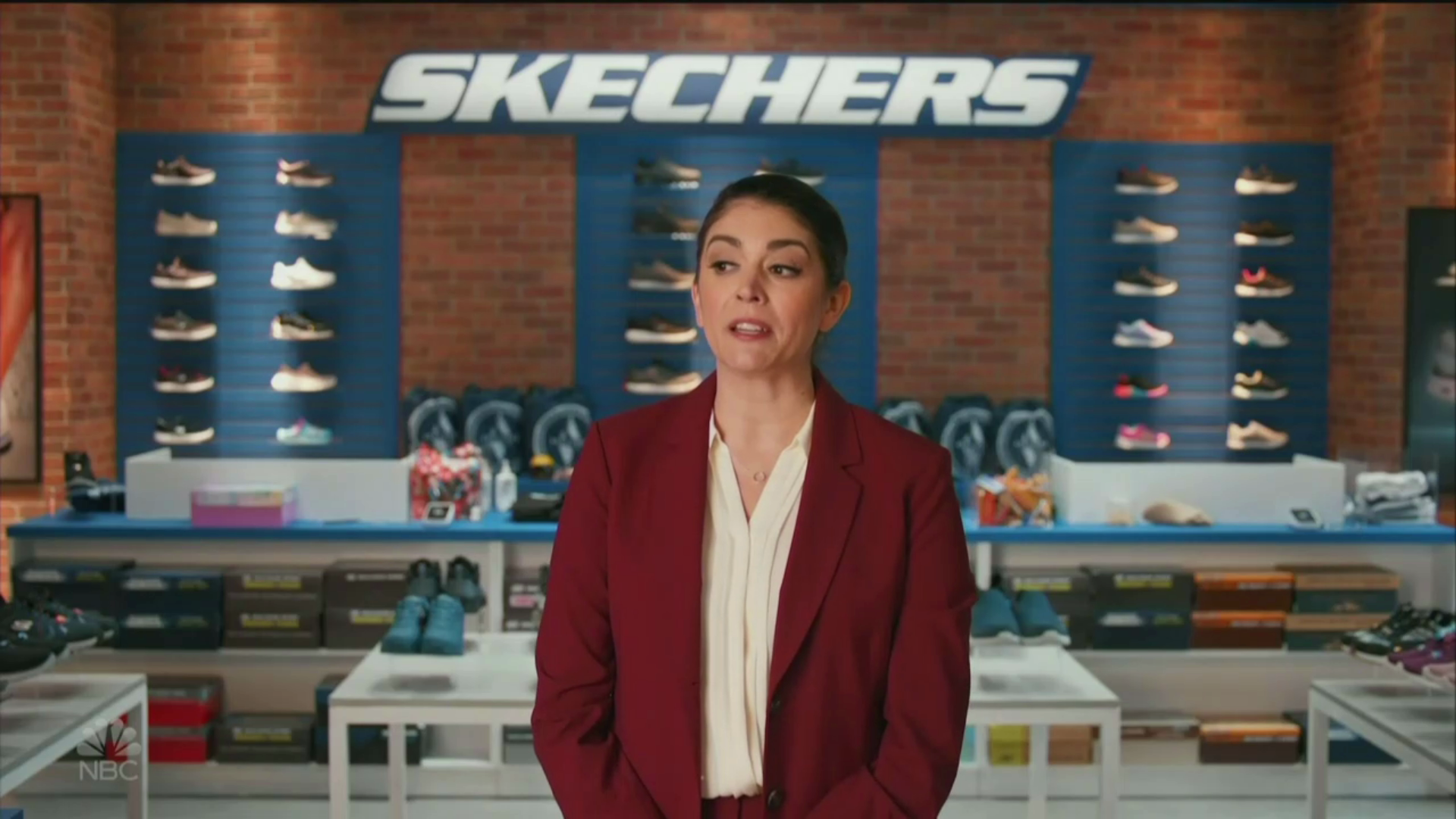 A Mock PSA For Skechers… Saturday Night Live’s new cast may have taken a victory lap after they aired a mock PSA for Skechers, brutally mocking Kanye for what happened at the company’s headquarter recently. Despite of choosing Ye’s anti-semitic outbursts, loss of business deals, George Floyd’s false statement and much more, SNL chose the most hilarious incident that recently happened in the 45-year-old rapper’s life.

‘Skeezy’ may not have happened for Ye, but this sketch surely did. In the PSA, Cecily Strong’s Skechers exec says in a red power suit, “Here at Skechers, we pride ourselves on two things: making stylish, comfortable shoes at an affordable price, and having zero tolerance for antisemitism.”

Later, she said, “Like the rest of the country, we were appalled by Kanye’s horrific comments and we vowed to never work with him in any capacity. But…can we also point out that of all the companies he could have approached and been rejected by, he chose Skechers.”

While mocking Skechers for their outdated products, she also described it as a “hip, edgy company” in voiceover, as images of three elderly people wearing Skechers were shown. But Kanye’s part was the most hilarious one.

The funniest line from this sketch came naturally from Bowen Yang’s Skechers director, who stated: “Now I noticed we haven’t heard anything from Crocs. I’m not saying Crocs is antisemitic, I just think it’s interesting we haven’t heard from them…” Here is a transcript of the entire PSA:

PARODY SKECHERS STAFFER: Here at Skechers, we pride ourselves on two things making stylish, comfortable shoes at an affordable price and having zero tolerance for anti-Semitism.

PARODY SKECHERS STAFFER: That’s why earlier this week, when Kanye West showed up at our corporate office asking to work with us, we said.

PARODY SKECHERS STAFFER: No, no way, no, no, thank you.

PARODY SKECHERS STAFFER: And we immediately escorted him out of the building.

PARODY SKECHERS STAFFER: Like the rest of the country. We were appalled by Kanye’s horrific comments, and we vowed to never work with him in any capacity. But can we also point out that of all the companies he could have approached and been rejected by, he chose Skechers? Skechers has always been a hip, edgy company. Everyone knows that. So, of course, Kanye came to us first. Carney came to Skechers and Skechers said no. Do you realize how insanely satisfying that is? I guess you could say that Skechers employees are kind of heroes like Kelly. Maybe two.

PARODY SKECHERS STAFFER: Years ago. Could you have imagined the headline, Skechers too good for Kourtney?

PARODY SKECHERS STAFFER: I actually feel high. Like, I think this is what cocaine feels like. The corporate was like, we can’t work with Kanye West. He’s crazy now. I was like, No, it took Adidas so many days to decide not to work with them. I mean, she walked in and we were like by bus, by the door.

PARODY SKECHERS STAFFER: And sure, Kanye and Skechers would have been a perfect partnership. He’s always been a disruptor in the fashion industry. And we invented shoes. You can wash in a washing machine. But again, we would never partner with them.

PARODY SKECHERS STAFFER: Besides, what would you even call a Kanye Skechers shoe anyway? The skeezy it’s actually not bad, but we’re not doing it.

PARODY SKECHERS STAFFER: Right because of the anti-Semitism. I’m proud to work for Skechers. I mean, when was the last time I said that? All we want is for people to know where Skechers stands and for a little recognition of how cool this makes us look. I mean, it’s not all about us, but it’s not like Allbirds is fighting the fight.

PARODY SKECHERS STAFFER: I notice we haven’t heard anything from Crocs. Not saying crocs is anti-Semitic. I just think it’s interesting. We haven’t heard from them.

PARODY SKECHERS STAFFER: And they think Kanye West could have been my boss, that is. Terrifying.

PARODY SKECHERS STAFFER: So thanks, but no thanks, Tanya. We don’t need you.

PARODY SKECHERS STAFFER: We don’t stand with you. And we might mess up in the future. But we didn’t this time.

PARODY SKECHERS STAFFER: And besides, I’m sure Connie will find some morally dubious company to work with instead.

PARODY SKECHERS STAFFER: He sure will. Hey, it’s me, Mike Gordon Doe from the Boys Body Pool, and I’m proud to announce that we are starting ties with Kanye West and Frank Denver immediately.

What Happened At Skechers Office? Kanye West is a man with a lot of guts, even though in a negative sense. Despite his continuous anti-semitic rants and losing business deals with major companies, he dared to visit Skechers’ main office in Manhattan Beach, Calif., and expect a partnership with the company’s founder Robert Greenberg, who is a Jew.

Kanye was present at the office with the hope that Skechers would be interested in partnering with his Yeezy brand, but it has been reported that he was escorted outside the office. Well, Ye’s got some guts to face Robert after what he said.

following the incident, Skechers issued a statement saying that West arrived “unannounced and without invitation” and was “engaged in unauthorized filming.” As a result, two Skechers executives “escorted him and his party” out “after a brief conversation.”

The company further mentioned: “It is not considering and has no intention of working with West. We condemn his recent divisive remarks and do not tolerate antisemitism or any other form of hate speech. The company would like to again stress that West showed up unannounced and uninvited to Skechers corporate offices.”

Companies like Foot Locker, Adidas, Balenciaga, Gap, CAA, and TJ. Maxx, Vogue and even JP Morgan Chase have cut ties with the “Donda” rapper for his anti-semitic remarks and “White Lives Matter” controversy. However, Ye finally apologised to the Jewish community in a recent interview on the Lex Fridman Podcast, calling them his “brothers”. But does it matter now?