Famous Twitch streamer Pokimane, whose real name is Imane Anys, was left embarrassed after her shirt buttons accidentally opened during a Twitch stream. The 26-year-old Moroccan-Canadian ended the stream and deleted the VOD as soon as she realised that there has been a wardrobe malfunction. There is a possibility that the internet personality may face a Twitch ban for the incident. 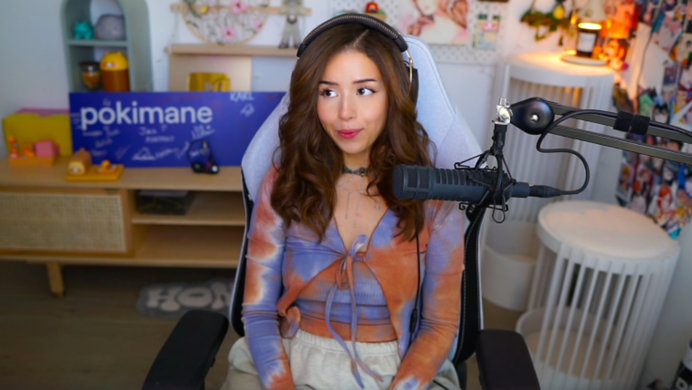 What Happened During Pokimane’s Twitch Stream? Pokimane, whose real name is Imane Anys, underwent an embarrassing wardrobe malfunction during her Twitch stream on Tuesday (Nov. 15). The Moroccan-Canadian streamer was wearing a sheer purple and orange top tied at the front when she was playing “Overwatch 2” during the VOD. However, as she got up and walked away from a computer, her shirt was left open, leaving part of her bosom on display.

Initially, she didn’t realise if anything went wrong and carried on addressing her fans, stating, “Hello, so I have a scientific question for everyone.” However, within seconds she realised the embarrassing malfunction and quickly went on to change her top before continuing with the stream.

Poikmane quickly deleted the VLOG but then some fans started circulating the copies on Reddit. Whether this was accidental or intentional, we don’t know, but many fans who were present during the stream believe that the “wardrobe malfunction” was accidental. Moreover, the internet personality is already so famous that she doesn’t need to pull such a stunt to seek attention.

Will Pokimane Face A Twitch Ban?

Did some research on the Pokimane wardrobe malfunction situation and it doesn’t seem to be a big deal as there was no nudity, the fact she continued the broadcast means she didn’t really view it as a big deal either as this has also happened to other streamers before #twitchnews

After Pokimane’s nip slip, fans have raised concerns that the Twitch streamer, whose most-played game is League of Legends, may face a temporary Twitch ban or suspension because it violates the platform’s nudity policy. “Seeing this clipped feels illegal,” one said on Reddit.

According to Twitch’s Community Guidelines, “nudity and sexually explicit content or activities are prohibited” on the VOD sharing site. However, the guidelines do not specify what happens in case of accidental wardrobe malfunction i.e. to say if nudity is accidental. Neither Pokimane nor Twitch has addressed her incident following the stream.

On the other hand, some Reddit users supported Pokimane and stated that there was no nudity as she was wearing nipple covers. On Reddit over even praised her for her composure and expressed sympathy. ‘Mollywood News’ tweeted: “Did some research on the Pokimane wardrobe malfunction situation and it doesn’t seem to be a big deal as there was no nudity, the fact she continued the broadcast means she didn’t really view it as a big deal either as this has also happened to other streamers before.” So yea, according to many, it does not seem like a big deal.

Pokimane, who has been noted by Forbes 30 Under 30 as the largest female streamer on Twitch, also runs a Youtube channel where she boasts over 6.6. million subscribers. She is known for sharing lifestyle, challenges and vlog content on her YouTube channel. Apart from this, she is also a member and co-founder of OfflineTV, an online social entertainment group of content creators.

If you’re not aware, in January 2022, Pokimane’s Twitch account was suspended for 48 hours midway through an Avatar: The Last Airbender watch stream after ViacomCBS made a DMCA claim. Later, her stream was raided by JiDion viewers, but he was later banned from Twitch.

However, it was reported that Ninja used his connections to get the ban reversed. Pokimane even criticized this move from Ninja. Anys, however, re-signed with Twitch in Feb. 2022. What do you think about this incident?