How to Buy Donald Trump NFT Trading Cards? Collection Sells Out in 12 Hours 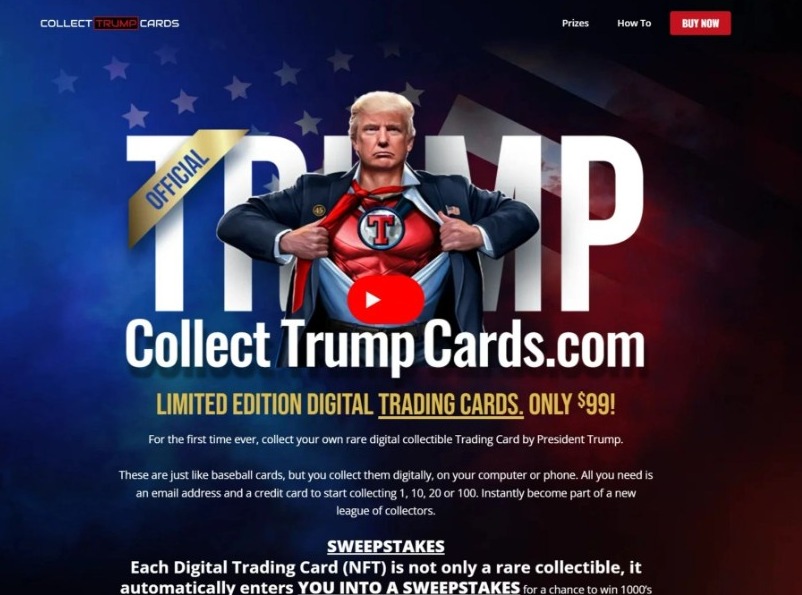 When Donald Trump shared that he was to make a “MAJOR ANNOUNCEMENT” on his social media platform, Truth Social, on Tuesday, the world became curious. Speculations started about his potential presidential campaign-related announcement.

However, his supporters as well as his haters, were surprised when Trump launched his NFT Trading Cards Collection on December 15, 2022. Despite excessive criticism and skepticism, the NFT collection is selling out really fast.

Donald Trump NFT Trading Cards Collection Launched: What is it?

To understand what is Donald Trump’s NFT Trading Cards, you must first realize what are NFTs and how they work. For starters, NFTs or non-fungible tokens are digital assets tied to its owner.

Each NFT is unique through cryptocurrency technology and is stored on a blockchain network. The uniqueness and authenticity of the token bring its value which is usually determined by its demand from prospective buyers. 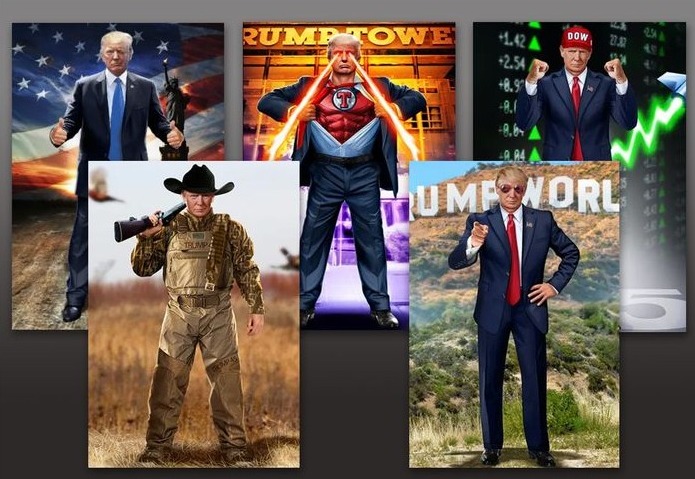 Coming back to Trump’s collection, the former U.S. President has launched NFT Trading Cards which users can buy and unlock exclusive parks. The official website states that 45,000 NFTs were created and 44,000 out of those are available to buy.

Trump also released a glorious video announcing the launch of the NFT collection. “Better than Lincoln, better than Washington,” the former U.S. President said. “These cards feature some of the really incredible artwork pertaining to my life and my career, it’s been very exciting.”

“Remember, Christmas is coming and this makes a great Christmas gift,” Trump added.

If you want to buy Donald Trump’s NFT Trading Cards, you have to visit the official website and wish they are available to purchase (or mint).

Update: As of now, the NFT Trading Cards are sold out as stated on the official website. This means you can’t purchase them from there. They are only available on OpenSea, which is the world’s biggest NFT-selling marketplace. 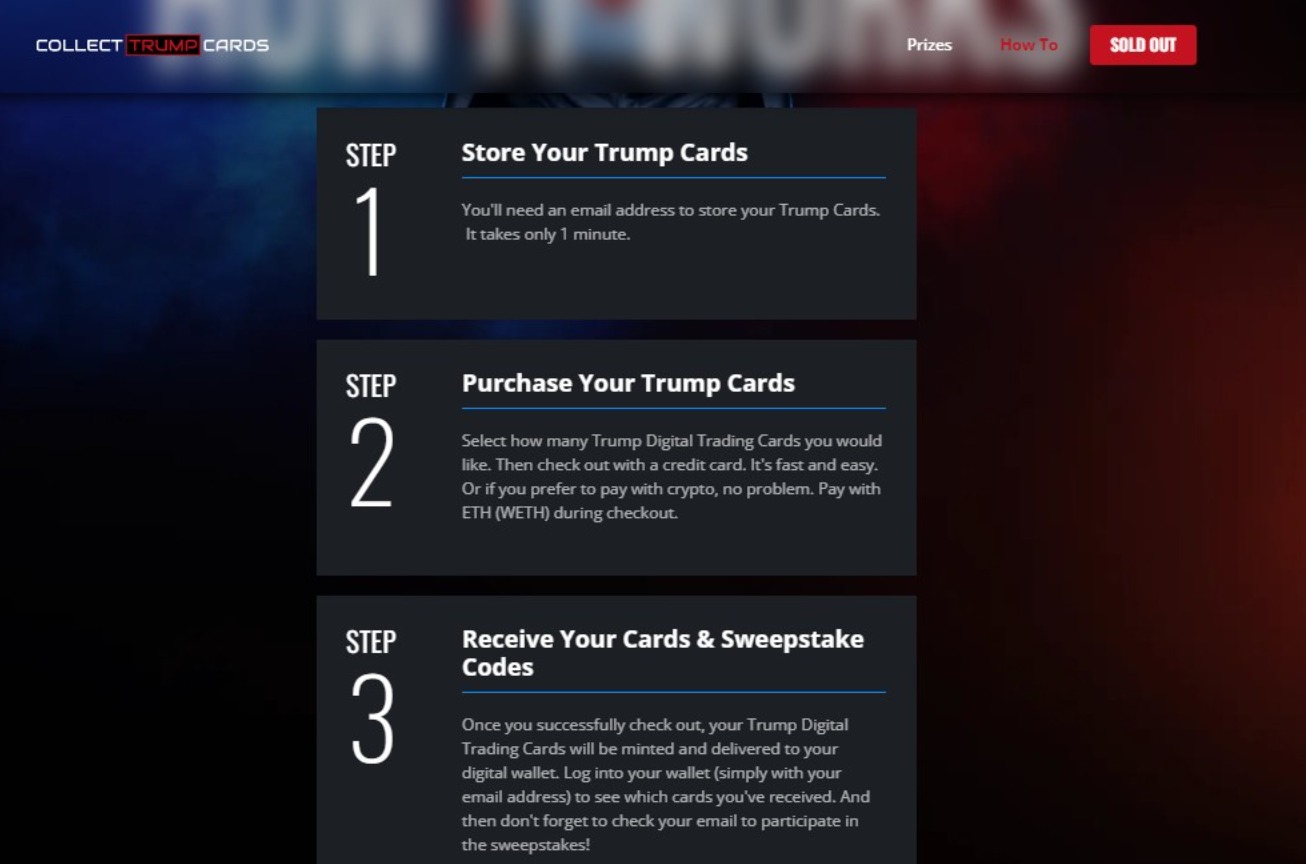 That’s all you have to do. Your NFTs will be minted and delivered to a digital wallet that you can access using your email address. The Sweepstake codes will also be sent to your email.

The NFTs are minted on the Polygon blockchain. You can transfer them to any of the wallets of your choice compatible with the blockchain.

What are the Perks of Buying Trump NFT Trading Cards?

When you buy Donald Trump’s NFT Trading Cards, you can unlock a number of exclusive perks which are listed below:

Each NFT purchased enters the buyer into a sweepstake to win thousands of prizes including the ones mentioned above.

“Win incredible prizes, including your chance to spend time with the President of the United States,” the website states. 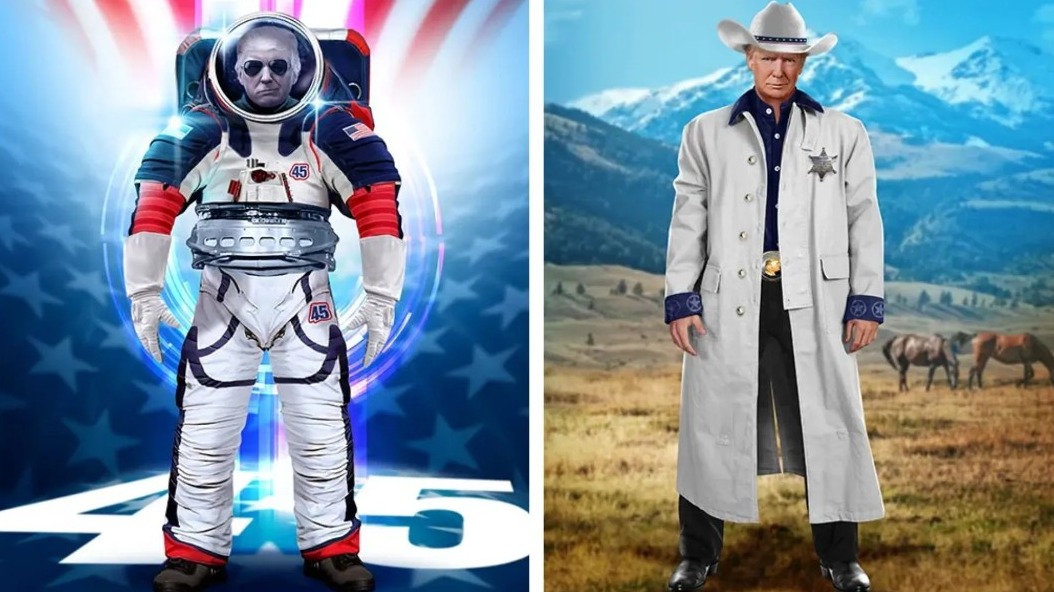 Every buyer who purchases 45 of the Trump NFT Trading Cards will get a ticket to a dinner with the former U.S. President. However, the schedule for the dinner is not revealed yet.

Each NFT Trading Card from Donald Trump’s collection was priced at $99 but they are already sold out. The cards are selling on OpenSea with the collection’s trading volume of more than 900 ETH or around $1.08 million.

The floor price of the NFTs is around 0.19 ETH at the time of writing or around $230 which is more than double its original price. Some of the tokens are also selling at even higher prices depending on their design and rarity.

The one-of-ones, the rarest of the NFTs are around 1,000 and comprise 2.4% of the 45,000-unit collection. They are selling for approximately 6 ETH at this time. The rarest card which features Trump standing in front of the Statue of Liberty holding a torch is currently listed at 20 ETH or $24,000.

The NFT Trading Cards from Donald Trump’s collection sold out in a crazy way. According to data from Dune Analytics, around 13,000 users minted 3.5 tokens upon launch. Notably, 115 customers bought 45 NFTs, which is the minimum number of tokens that guarantee a ticket to dinner with Trump.

Moreover, 17 people purchased 100 NFTs which was the maximum quantity allowed to the mint for an individual user according to the official website. However, additional metrics revealed that some wallets are holding more than that.

From the 45,000-unit collection, 1,000 NFTs weren’t put for sale and are held in one Gnosis Safe multi-signature wallet. The wallet is reportedly the one receiving royalty payments from the secondary sales of the NFTs.

BREAKING: MAGA voters start to finally dump Donald Trump after he unveils his digital NFT trading card scam, saying he’s “washed up” and “mental” and they’re going to support Ron DeSantis now. RT IF YOU THINK THAT THE TRUMP CARDS ARE DEEPLY EMBARRASSING!

Trump’s NFT collection is among the top trends on social media right now. A lot of people are criticizing the former President for launching the NFT collection just after the recent FTX tragedy that has shaken up the global cryptocurrency market.

The support for Trump is also eroding amidst speculation about his 2024 reelection bid. Trump has observed his support drift down among Republican allies and supporters alike for disappointing midterm results for the GOP.

When the ex-President posted a major announcement, the pointers were directed toward the upcoming Presidential election. However, it turned out to be an NFT collection. Initially, people even suspected the authenticity of the collection.

However, it sold out insanely later on. People are now ready to pay wild prices for the cards on OpenSea. Feel free to share your thoughts about the collection in the comments.