My Hero Academia Season 6 Episode 15 will release on Saturday, 14th January 2023, at 5:30 PM JST. The previous episode showed the damage that both sides suffered after the battle. Episode 15 will discuss the ongoing conflict between the Heros and Villians. The new episode will air on Saturday, 14th January 2023, at 5:30 PM JST. The timing of the release will vary across the globe. International fans will be able to watch the episode at the following times:

Where To Watch Episode 15

My Hero Academia Season 6 Episode 15 will be available to stream on Crunchyroll. Fans in the United States of America can watch the episode on Hulu. The show is also available to watch on Netflix India.

The episode began with Midoriya narrating the official report released by the police regarding the things that occurred during the battle. The report states the damage in Jaku city and Gunga Villa incidents. The scene opens with a statue of All Might with ‘I am not here’ over it. The ambush ended with the leader dying. Re-Destro turned out to be a clone of Twice. The report further states that Garaki confirmed that the flow of electricity was too weak to wake up Shigaraki.

It was his willpower that made it possible. Moreover, Shigaraki escaped with seven Nomus, leaving Mr. Compress and Gigantomachia behind. The report left out the detail that interns fought with Shigaraki. Furthermore, Deku states that the All for One holder tried to steal the One for All from him, but Deku felt Shigaraki asking for help. A total of 16,929 members of the liberation front were arrested.

Raids were being conducted throughout the country to find the hideouts. Episode 14 also showed the aftermath of the battle and the overwhelmed heroes trying to save the civilians.

The Students are then shown trying to wake up the deceased Midnight and crying. Shigaraki, under All for One control, begins plotting the next step of the battle against the Heroes. 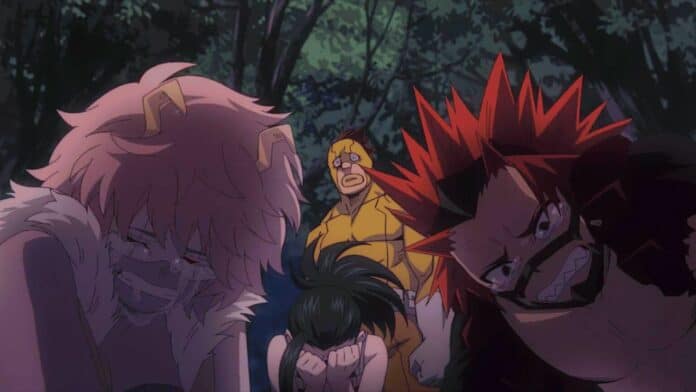 What To Expect From Episode 15

The episode will further show both sides still overcoming the effects of battle. The preview showed Shigaraki planning to free All for One from prison. The fight moves into the second phase.

All for One is finally free and will be ready to take on his proper form. The Villians plan to Target Tartarus, the prison where All for One is being held. The preview also showed Aizawa lying on a hospital bed with Present Mic sitting next to him.