Darren Criss and Mia Swier have become parents! The couple just welcomed their first baby in the world. Read the article further to know more about their little bundle of joy. The Glee star took to his Instagram to share the happy news with his fans all over the world. “M & D made some sweet music”, he captioned the post. We must say that they have welcomed a little angel into their family.

In the picture shared by the star, we can see the family of three in a hospital room. The couple can be spotted sitting next to each other on a hospital bed. They are looking at their newborn baby Bluesy in the shot. The baby is wrapped in a pink-and-blue blanket and has a big pink bow on her head.

We can see Darren’s wife Swier holding their precious baby in her arms, we can also witness that there are a few stitches on one of her hands but her smile in the photo made our day a lot brighter.

Criss made the duo’s pregnancy announcement in October

Darren revealed that he and his wife Mia were expecting their first baby in October of 2021. He dropped a few photos along with a video on the social media platform Instagram.

“We’ve been making music for years.⁣ … But this time we made a BEAT.⁣ The ultimate collab droppin Spring 2022”, he captioned the post.

In the video shared by Criss, we can see the duo listening to the sounds of their unborn child’s heartbeat in a recording studio. That must be such a special moment for the two of them.

When did Darren get married to Mia?

Darren and Mia tied the knot in February of 2019 after spending nearly a decade together.  They said their vows in New Orleans in front of their family and friends. Many of the groom’s co-stars from the show Glee including Lea Michele, Harry Shum Jr., and Chord Overstreet also attended the wedding of the couple.

Criss has spent a large majority of his life in the spotlight. On the other hand, the love of his life Mia is one of those people who like to shine behind the camera. As per the reports, she is a writer and producer by profession. 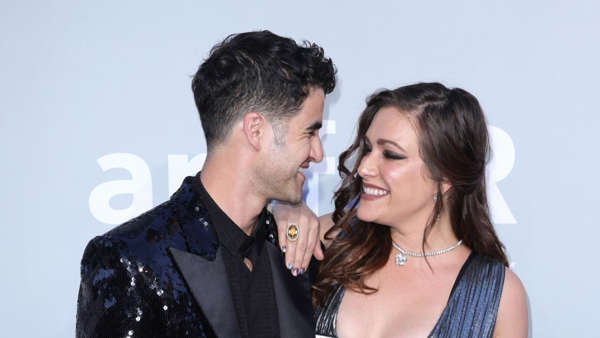 In the past, Swier has directed promotional content and campaigns for shows like Glee, Scream Queens, The Mindy Project, and New Girl. Apart from this, she is also a freelance director with many short films and music videos under her belt.

We send our hearty congrats to both Darren and his wife Mia as they have become parents. Sending lots of love and light to the duo and their little one. Don’t forget to stay tuned with us for the latest updates from the world of showbiz.