Tesla has brought Christmas early and sadly it is not for adults but kids. Tesla announced the brand new Cyberquad for Kids this month which rolls out for sale soon.

The company unveiled an All-Terrain Vehicle (ATV) called Cyberquad which was inspired by their all-electric steel pickup truck Cybertruck back in 2019. But no further news of it came out after that.

Out riding with the kids on the Cyberquads! So much fun for kids and adults! @tesla pic.twitter.com/gq23GWsiDk

The shipping dimensions of the Cyberquad for kids are 47 inches, 26 inches, and 27 inches in length, width, and height respectively.

The Cyberquad for kids comes with three-speed options:

The Cyberquad has a range of 24 Kilometres in one charge on its 36V lithium-ion battery. This makes the Cyberquad better than the comparable products that use a lead-acid battery. The quad also features Cybertruck’s Cyberpunk-themed look. 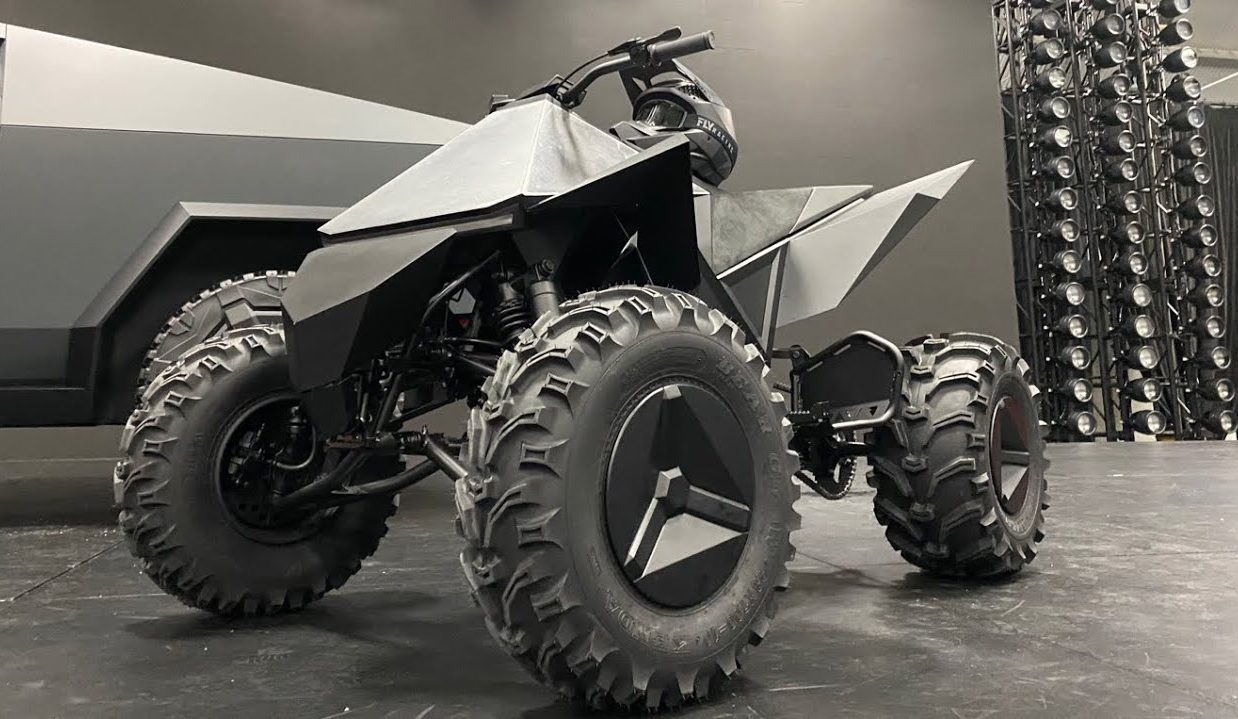 The road capabilities of the Cyberquad look promising as it is made up of a sturdy steel frame and has thick rubber tires. According to Tesla, the battery duration will depend on factors like the driver’s weight, the terrain, and speed.

The vehicle weighs 122 pounds and has a carrying capacity of 150 pounds. In terms of age, the Cyberquad is best suited for kids of age 8 and above.

I want one for me 👁👄👁 pic.twitter.com/8xKllwfuPC

Now that’s something I would definitely buy. For the kids of course.. 😉 #tesla #cyberquad https://t.co/IbvyXRdRtb

Sure it's expensive, but you get 50% off if you can pronounce Elon's son's namehttps://t.co/xTx7wzUWw3

The original Cyberquad was claimed to be capable of charging from the Cybertruck’s batteries and could easily fit in its bed. But this newly introduced Cyberquad for kids is different from the announcement back in 2019 and it is still not known whether it can be charged from the Cybertruck.

Unlike Cybertruck, Cyberquad does not claim supercharger speeds and could take up to 5 hours to fully charge. And the quad bike does not come fully constructed either as there are at least 18 separate pieces listed in Tesla’s instruction booklet.

Late on December 1st, Tesla has launched and listed Cyberquad for Kids on the official website. But Tesla also has indicated that “Orders are not guaranteed to arrive ahead of the holidays” so that’s a bummer.

The Tesla Cyberquad is priced at $1,900 currently and according to Tesla’s page, the shipping will begin within a week. The Allen wrench also comes with the package but the users are still required to have their own tools.