Snapchat for Web: How to Get and Send Snaps from PC?

Snapchat has finally rolled a web application after existing solely as a mobile app for over a decade. The new Snapchat for Web application will let users send snaps, chat with friends, and connect on calls and video calls using their personal computers. Find out how it works. 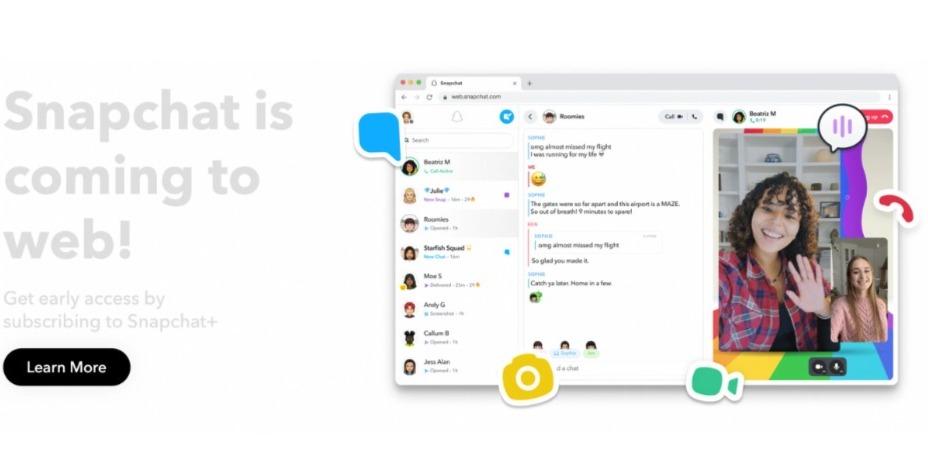 On Monday, July 18, 2022, Snapchat announced that they are launching a web interface to use the app on desktops. Snapchat’s web application will include all the basic features that one can access on the mobile app and more will be made available in the future.

“Today, we’re introducing Snapchat for Web, a new way for our community to stay connected through our camera when they’re at their computers,” Snapchat stated in the press release.

For now, Snapchat for Web will only be available to Snapchat+ subscribers in the US, the UK, Canada, Australia, and New Zealand. The company also plans to launch it for subscribers in France, Germany, Saudi Arabia, and the UAE soon.

What is Snapchat for Web?

Snapchat for Web is a browser-based application that’ll allow Snapchat users to access their accounts on their desktop or laptop. It’s like WhatsApp Web but you’ll have to log in to your account with the username and password, instead of scanning a QR code. 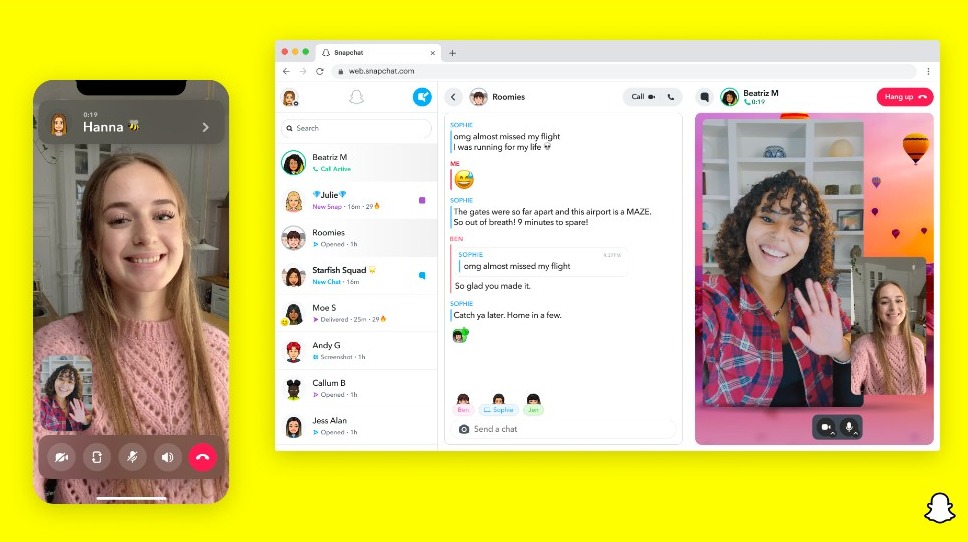 Previously, users used Android emulators like BlueStacks to run Snapchat on their PC. However, with the launch of Snapchat’s own web interface, users can now officially use their favorite app and have fun with their friends while on their computers.

It’s a much-needed utility that users have been calling for for years. “Every day 332 million people open Snapchat on their phones, and with our camera, can start conversations with their real friends,” revealed Snapchat.

What features are available on Snapchat for Web?

Snapchat for Web offers the basic features that you find on the Snapchat mobile app. You can use it to send or receive messages and snaps. The chat is cleared after 24 hours just like the mobile app. You can also have regular calls or video calls via the desktop client.

Users can also react to chats, send stickers, and reply to messages in the chat. Snapchat is also planning to bring the Lenses feature to the web app very soon. For now, it isn’t available and the Snapchat Maps feature is also absent. 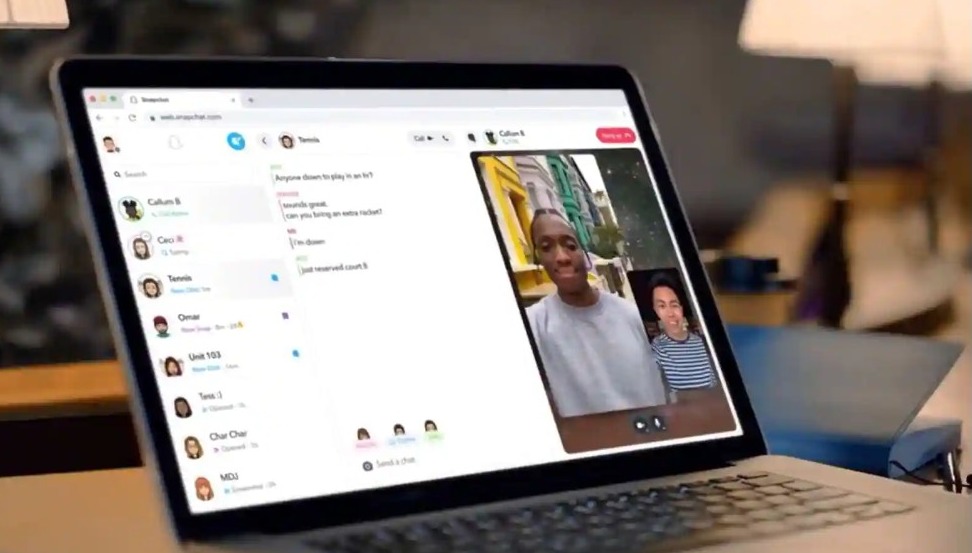 “Snapchat for Web includes top messaging features like Chat Reactions and Chat Reply, along with Lenses which will roll out soon,” wrote Snapchat in the press release.

How to Get Snapchat for Web?

Using Snapchat for Web is fairly simple. All you need is a PC with a stable Internet connection and your Snapchat account credentials. Make sure the desktop client is available in your country and you have subscribed to the Snapchat+ subscription.

Once ready, launch a web browser, enter web.snapchat.com in the URL, and hit Enter on the keyboard. After that, enter your Snapchat username and password, and click on the “Verify” button. 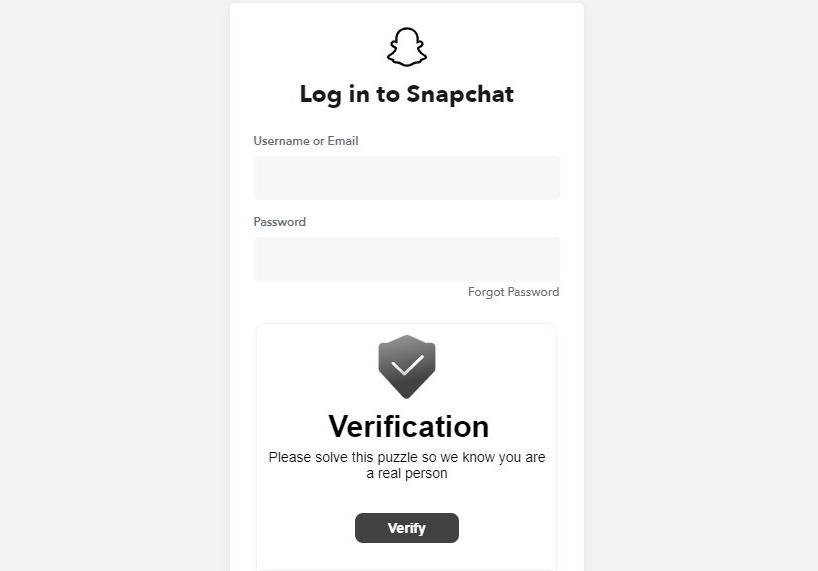 You will then receive a prompt on your phone to complete the two-step verification. After verification, your Snapchat account will be logged in on the browser. You can then pick up your chats from where you left them on mobile.

When you are using Snapchat from the web app, your Bitmoji will appear in chats with a laptop icon. This indicates and tells others that you’re accessing the app via your PC. There’s also a privacy screen in the web app that hides the Snapchat window when you click away for something else.

One functionality that isn’t available on Snapchat for Web is the ability to capture screenshots. You can still click pictures of the screen using your mobile though.

Can you get Snapchat for Web without Snapchat+ Subscription?

No, Snapchat for Web is currently only available for users with the Snapchat+ subscription. The free Snapchat users won’t have access to the web client for now. They’ll still have to rely on the older methods of using Snapchat on their PC. 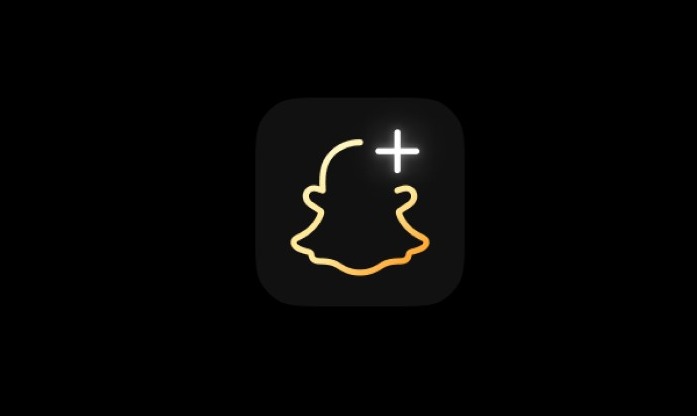 Once the company launches the final version of Snapchat for Web, free users across all countries will be able to use it.

You can use Snapchat for Web with Snapchat+ Free Trial

Snapchat has recently launched a premium subscription called Snapchat+. The company is also offering a seven days free trial for the paid membership for users to try. You can utilize this free trial to try Snapchat for Web.

Make sure you reside in any of the countries where Snapchat for Web is available. Once ready, follow these steps:

After that, your Snapchat+ subscription will be active. You can then use the method shared above and use Snapchat for Web on your PC.

When will Snapchat for Web be available for everyone?

Snapchat definitely has plans to make Snapchat for Web available for everyone. However, they haven’t delivered a timeline for when that’ll happen. Currently, it’s available exclusively to Snapchat+ subscribers in the US, the UK, Canada, Australia, and New Zealand.

It will also be available to Snapchat+ subscribers in France, Germany, Saudi Arabia, and the UAE very soon. After that, the company will make it available to more countries.

Before that, Snapchat needs to see the response to their web app and expand it based on that. For now, only the core features of the Snapchat app are available in the desktop client. They’ll include more features in the coming months.

“With so many in our community spending more time online, whether it is for remote learning or working, streaming or just plain browsing – we saw a huge opportunity to make it easier for our community to stay connected throughout their day, and we cannot wait to bring our favorite fundamental Snapchat capabilities to the web,” Snapchat wrote.