Samsung is expected to launch Galaxy Z Flip 4 this year which will be the successor to the Galaxy Z Flip 3 from last summer. The upcoming Samsung foldable has high expectations after the benchmark set by its clamshell-style device last year. Check out the Samsung Galaxy Z Flip 4 release date, expected specs, features, price, and more. 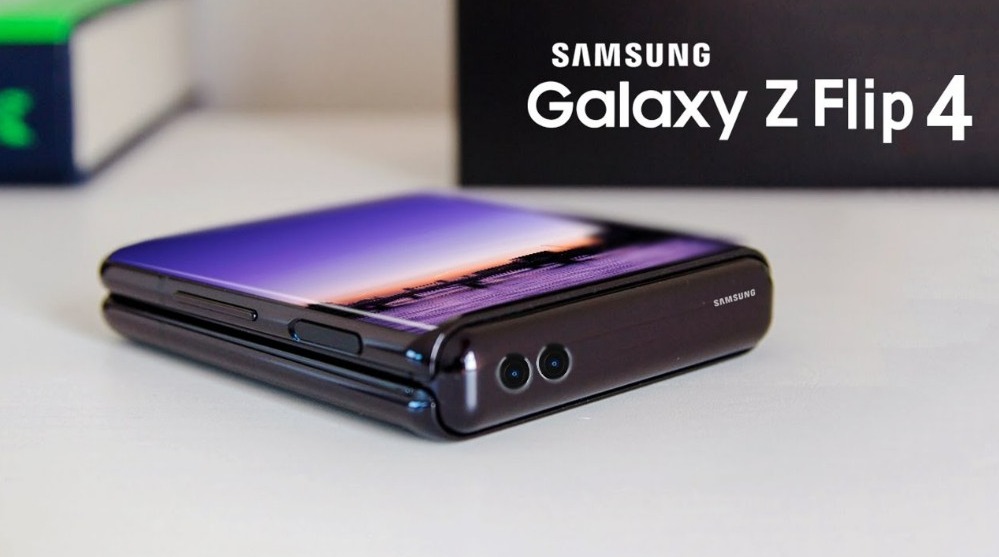 The upcoming Samsung foldable is rumored to be a highly powerful device boasting an upgraded design and an enhanced battery life. However, bringing revolutionary improvisations while still staying within the “affordable” price range could be a tough task.

The foldable smartphones market is still emerging and there’s a lot available to achieve right now. With rumors of even Apple working on a foldable iPhone, Samsung would be ready to face tough competition in the coming times.

Brands like Huawei, Motorola, and Xiaomi are already exploring their options in the industry. Samsung is the market leader in the segment currently. This ensures that Z Flip 4 won’t let you down.

Samsung hasn’t confirmed Galaxy Z Flip 4 officially. However, the leaked renders and Samsung’s commitment to foldable phones replacing the Note lineup pretty much confirm that there will be an affordable foldable smartphone with this name. 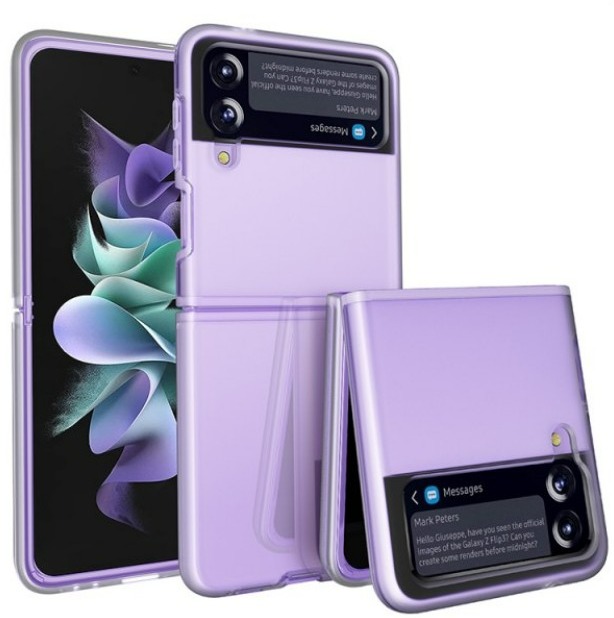 Samsung’s recent history of launching mid-year devices suggests that Galaxy Z Flip 4 will likely launch at the Unpacked event in August alongside the Galaxy Z Fold 4. This would give tech-giant enough time to get a sufficient lead over the upcoming iPhone 14 lineup.

Prominent leaker Jon Prosser is also claiming that Samsung will launch Galaxy Z Flip 4 on August 10, 2022, and a full retail release will take place a litter later on August 26, 2022.  However, Samsung is yet to confirm the date of the Unpacked event.

There have been a number of leaked renders revealing what the upcoming Galaxy Z Flip 4 will look like. The design shows that Samsung’s upcoming foldable will be nearly identical to the Galaxy Z Flip 4, except for minor changes and a new bluish shade.

The main display will retain the 6.7-inches size and the cover screen will be of 1.9-inches. However, the new foldable device will be a bit thicker than the Z Flip 3 with dimensions of 165.1 x 71.9 x 7.2mm in the unfolded state. It’s also expected that the gap between the two screens will be decreased.

Another source states that Galaxy Z Flip will feature a major design overhaul with a lighter hinge but the same screen size. Ross Young states that it will have a slightly bigger cover screen. Yogesh Brar later revealed that it’ll be of 2.1-inches specifically.

The rumored shades for the Galaxy Z Flip 4 include graphite, bora purple, pink gold, and the above-mentioned blue. There is also an expectation that a customizable Bespoke Edition will have even more color combinations than Samsung offered in its predecessor.

The upcoming foldable device will have an under-display camera with two 12-megapixel lenses. It would sport a 3,300 mAh battery, just like Flip 3. However, there’s a source claiming that Samsung would extend the battery to 3,700 mAh to increase the battery life. 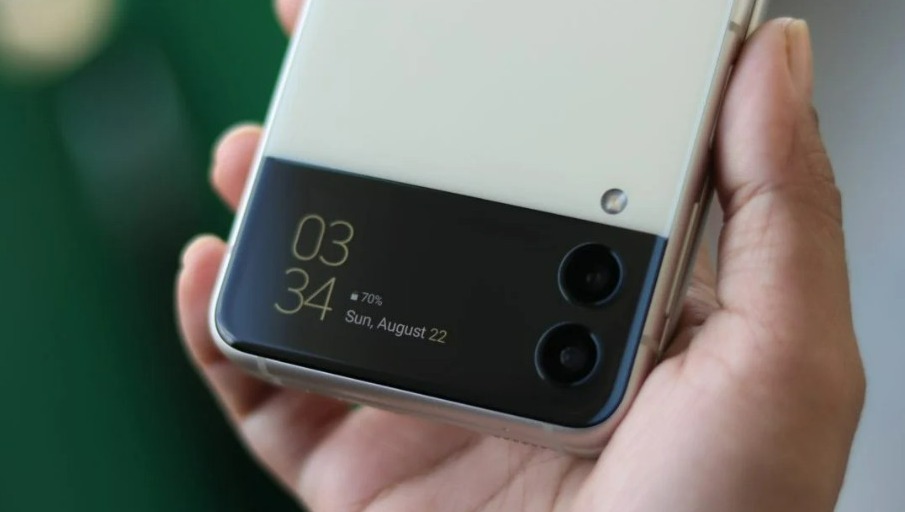 It will have an octa-core CPU and Adreno 730 GPU to offer monstrous performance within its range. The screen type will be Super AMOLED, leading to enhanced efficiency and power optimization. It’ll also have a power button-mounted fingerprint sensor.

There’s a report suggesting that the Galaxy Z Fold 4 will feature a built-in S Pen like the Galaxy S22 Ultra. However, that seems highly unlikely for the Galaxy Z Flip 4 considering it’s an affordable option in the foldable category.

Samsung Galaxy Z Flip 4 may have an under-display Camera

There’s a leak suggesting that Samsung is testing with an under-display camera for the Galaxy Z Flip 4. However, it’s only a prototype so far and the company may end up using the punch-hole cut-out design for the front-facing selfie camera.

Another leak hints that Galaxy Z Flip 4 won’t feature an under-display camera. However, it also states that the foldable will include a third camera on the rear panel. If this happens to be true, this will boost the camera performance of the device. 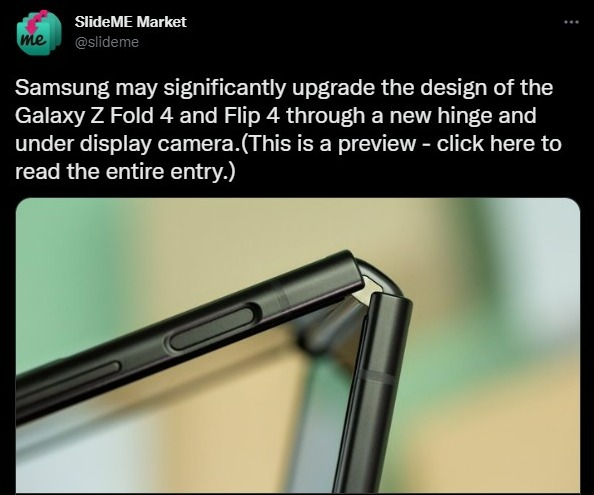 There is also a Galaxy Z Flip 4 patent that reveals a rotating camera located in the hinge. However, it seems highly unlikely for Samsung to implement it in the final design.

Take a look at the expected full phone specifications of the Samsung Galaxy Z Flip 4:

These specifications aren’t official or finalized by Samsung. They are courtesy of GSMArena.

We don’t expect Samsung to deviate much from the price range for Galaxy Z Flip 4. It’s an affordable foldable device that Samsung expects to sell as many units as they could. Hence, they’ll be sticking to the $999 price range for the upcoming device.

Therefore, the expected price for Galaxy Z Flip 4 will be $999 / £949 / AU$1,499. There’s even an expectation that it could be even more inexpensive than its predecessor. This comes after Z Flip 5G got a big price cut earlier.

We’ll keep you updated about all the latest developments about Galaxy Z Flip 4. Make sure you keep visiting us to check the latest news and rumors about it.