After multiple delays and postponements, Weird West is finally ready with a confirmed release date. The immersive RPG title by Devolver Digital and Wolfeye Studios is finally coming to PC and consoles this week. Find out everything about it here. 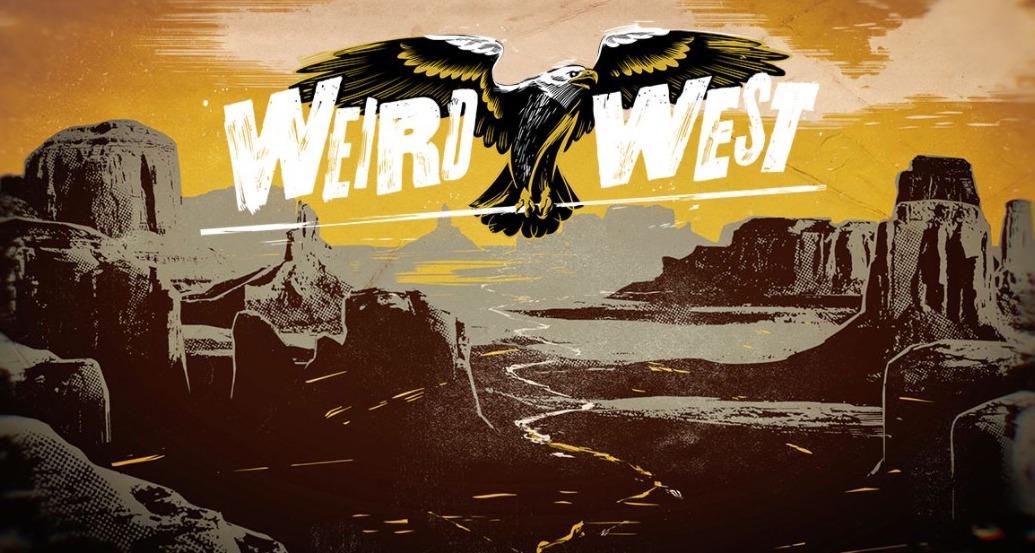 Weird West will also have a Day One release on the Xbox Game Pass. So, if you own an Xbox One and Microsoft’s gaming subscription, you’ll be able to enjoy the upcoming cowboy RPG on the day of its launch without having to pay any money.

The developers have already revealed a brief look at the gameplay alongside multiple trailers. We’ll take a look at them here, and we’ll guide you with pre-ordering the game across all platforms.

Weird West was initially planned to be launched in 2021, however, the release date got delayed. After that, it got another release date of January 11 this year, but the developers had to postpone the release once again.

Now finally, Weird West will release on Thursday, March 31, 2022. And, this time, there are no delays. It has been in development for almost three years now as ex-Dishonored developer Raphael Colantonio first announced it back in 2019. 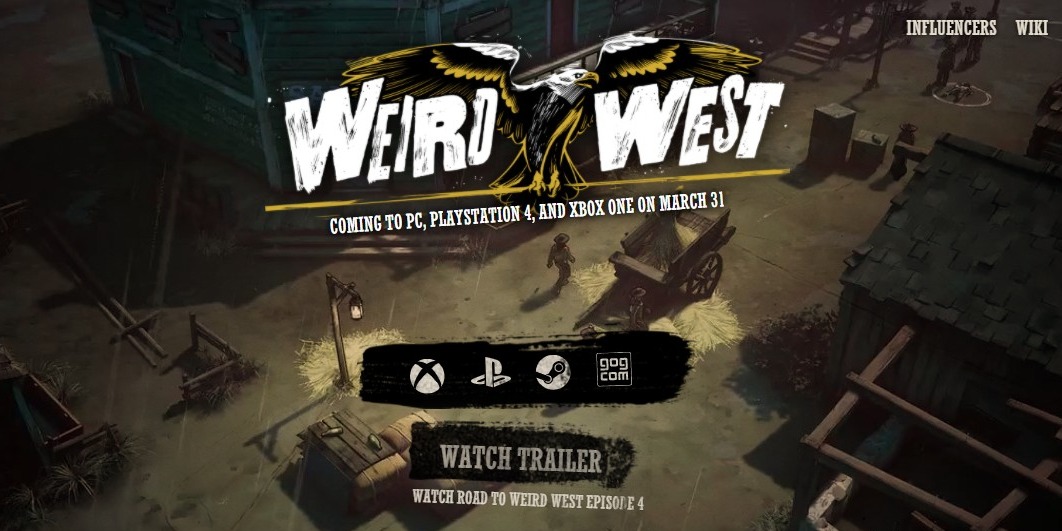 The launch time for Weird West is scheduled at 6:00 PM CT/ 7 PM ET/ 4 PM PT on the PlayStation Store while the game will be available in the UK at midnight on Thursday. The launch time on Xbox could differ slightly as it’ll have a Day One release on Xbox Game Pass.

Weird West will be available on the PlayStation 4, Xbox One, and Microsoft Windows PC (via Steam). It will not launch on the latest-gen consoles and Nintendo Switch.

Does Weird West have cross-play or multiplayer co-op?

No, Weird West does not feature cross-platform playing support (cross-play), and it also doesn’t have any online multiplayer co-op either. This means that PC, Xbox, and PS4 players will not be able to play together or against each other.

When is Weird West coming on Xbox Game Pass?

Weird Weist will have a Day One launch on the Xbox Game Pass. For context, “Day One” means the game will be available in the Game Pass library on the same day of its launch.

Weird West: the immersive sim of Xbox Game Pass goes Gold before its release on March 31

Therefore, players will be able to play and enjoy action-filled adventures in the retro-styled world on 31st March 2022, via the Xbox Game Pass for free. Players on other platforms can pre-order it right away.

Weird West is an action role-playing game developed by WolfEye Studios and Published by Devolver Digital. This RPG implements elements of the immersive simulator genre with randomized elements throughout the world. It will feature the story of five bounty hunters.

The player takes the role of heroes in the American frontier who encounter supernatural happenings. The world and your surroundings are interactive and responsive to your actions. For example, when you shoot an ammo box, it’ll explode and cause damage to the surroundings.

The team describes the gameplay as the “action version of Fallout 1 or 2.” Whereas, the game actually seems very similar to a twin-stick shooter.

The story revolves around strange events that combine typical Western tropes with fantasy-based or supernatural elements.

There is action, horror, fantasy, cowboys, and even science-fiction. Along with the blending of genres, there is also a mixture of multiple mechanics. It is set in a unique version of the world with magic, monsters, and unexpected destruction in the Wild West.

Players have to keep exploring the world, find and complete quests, discover the truth, and survive in the twisted world. There is also a “Permadeath mode” in Weird West. In this game mode, the player character and their companions die permanently upon defeat. 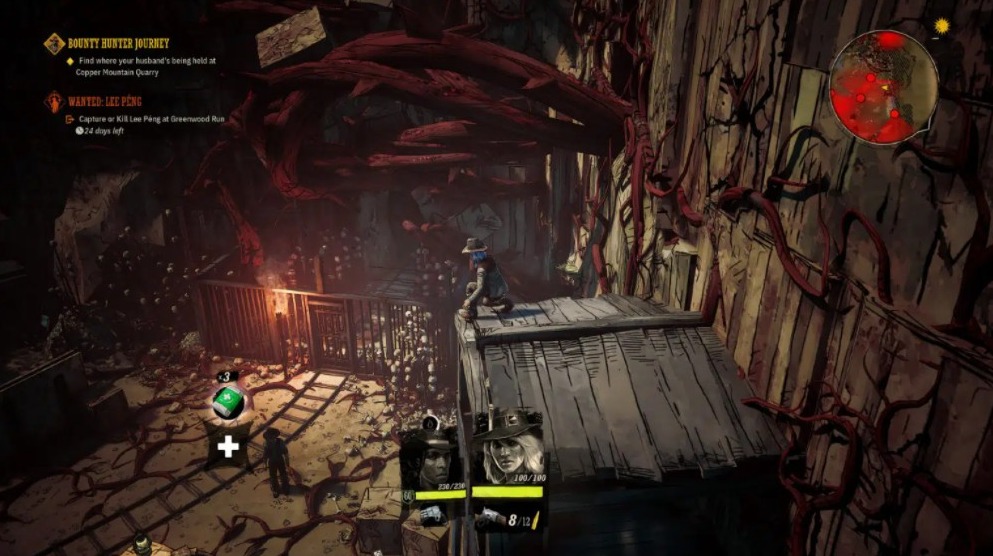 The available trailers and gameplay footage for Weird West seems pretty great. It is the kind of game that no one knew they wanted but turns out to be fun actually. You can give it a try if you are not playing anything else this Thursday.

Weird West Price: How to Pre-Order it?

Weird West is available for a flat price of $39.99 on Steam, PlayStation Store, and Xbox Games Store. You can pre-order the game to start playing as soon as it is available. You can even play it for free on Xbox One if you have the Game Pass subscription. 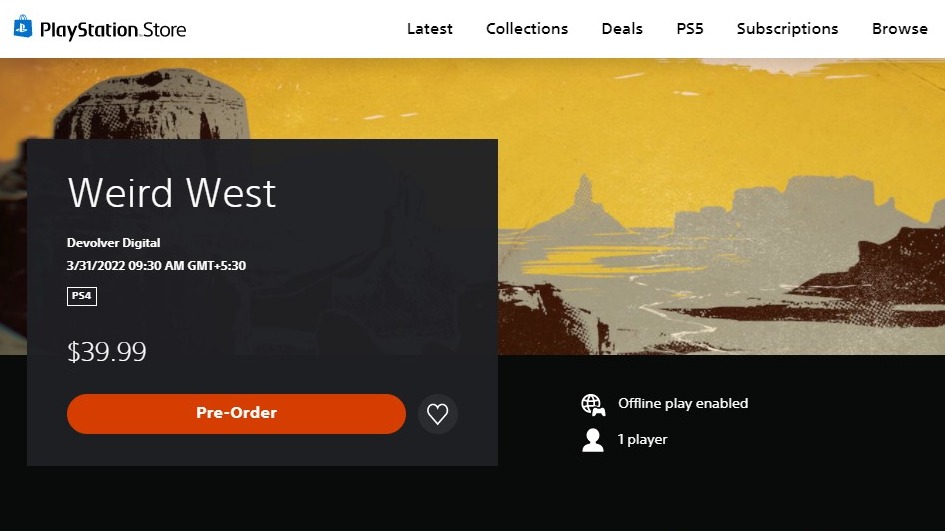 Pre-ordering the game on will offer players Calamity, which is a reliable mule offering a headstart while you are starting your adventures in the twisted world. It doubles your inventory size, helps you escape locations even when enemies are chasing you, and can you can traverse through the map in a faster manner.

If you planning to try out the game, just head over to any digital retailer, and pre-order your copy right away.

That’s all for this post. Are you going to give it a shot? Don’t forget to tell us using the comment box.