Weddle is the NFL Version of Wordle for Football Fans

After the rise of Wordle to the heights of fame and success, many spin-offs based on the core concept but with a little twist were born and also got very popular. Weddle is one of them, and it is the unofficial NFL version of Wordle. And yes, it takes the title’s inspiration from Eric Weddle. 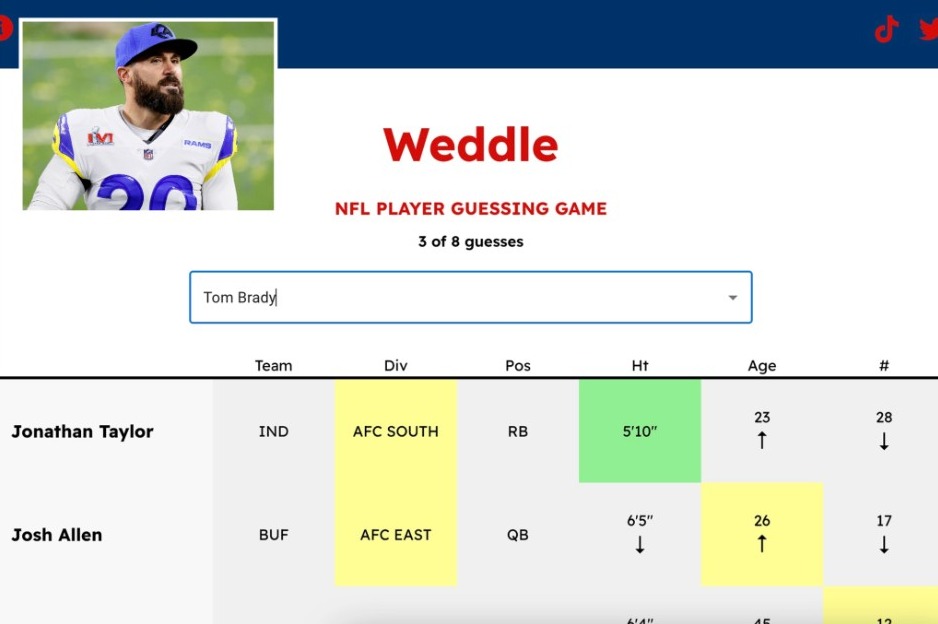 A Wordle spin-off based on NFL was widely expected after the success of other sports-based Wordle alternatives such as WARdle (MLB version), Gordle (NHL version), and Poeltl (NBA version).

Weddle works on the same concept- you have to guess the name of a mystery NFL player in fewer turns while working on the hints given by titles, and every day there is a new puzzle available.

Upon solving (or losing), you will see the mystery player’s name, team, division, position, height, age, and jersey number. You can also share your results to show off your NFL knowledge among your friends and followers.

What is Weddle and Who Created It?

Weddle is the unofficial NLF-based Wordle spin-off where you have to guess the name of a mystery NFL player every day. The concept is based on Wordle and inspired by other sports-based Wordle alternatives. The rules are also the same, and we’ll explain them later.

Weddle is created by two high school students, and the duo came up with the idea during a biology class, according to ESPN. One of them develops the website and handles all the bugs and updates, while the other manages social media handles.

The parents of the two have decided to keep their identities undisclosed as they are minors, so we can’t tell the names here. The duo also reached out to Eric Weddle for authorization and he described it as “Pretty wild.” 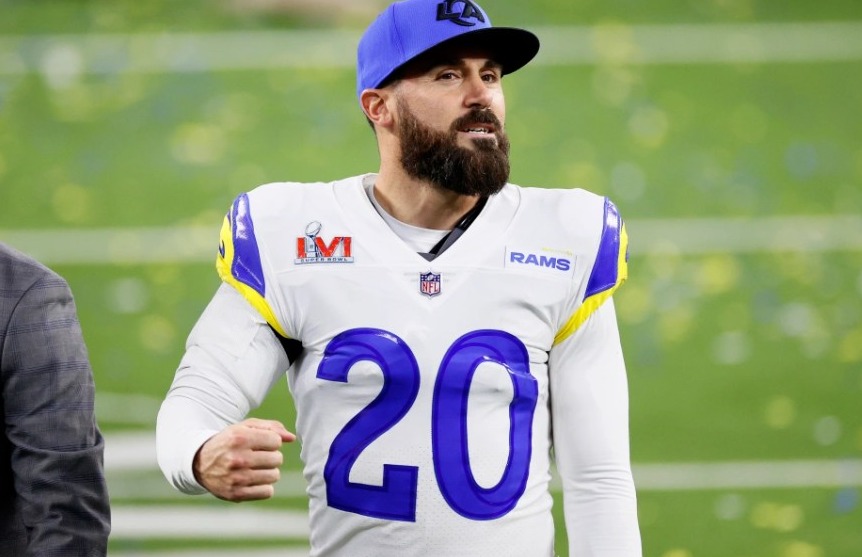 The creators of Weddle also told ESPN that they picked the name Weddle because it is similar sounding to Wordle, and because “we’re also fans of Eric Weddle and everything he’s done recently.” The legend recently unretired to lead LA Rams to a Super Bowl victory.

How does it Work?

Weddle is a web-based word-guessing game that anyone can play for free using only a web browser. In this game, there is a mystery word which is the name of an NFL player. You have to guess it in under eight or fewer turns. You can only play it once, just like Wordle. 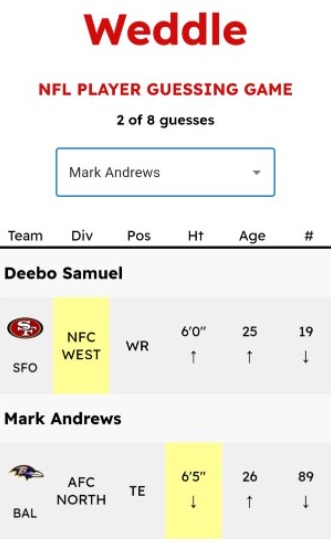 If you get a green tile, it means the particular stat has matched with the mystery player. You need to keep focusing on the tiles and put your brain to work to figure out the mystery NFL player of the day.

How to Play Weddle?

Playing Weddle is very simple, only if you have a lot of information and knowledge about the NFL players from the past and present. To start playing, launch a browser on your PC or mobile, and visit the Weddle website.

You will see an empty box, and upon interacting, you can enter the name of an NFL player to start the game. You don’t have to type the full name as the game’s database will offer suggestions, and you can choose from them.

When you enter a name, you will see the stats of the player, and the color of the tiles will turn either green, yellow, or stay grey. Yellow means you are nearing the correct answer, green means that you have got that particular aspect right, and grey means you need to think harder.

You have eight attempts and you need to guess the correct name to win the Weddle of the day. If you do, you can share your results directly on Twitter, TikTok, or mail them. And if you lose, you will still know the correct answer.

Weddle also has a Hard Mode available now, and you can turn it on by clicking on the “Gear” icon present on the main screen, and toggling the Hard Mode switch on. After that, the game’s difficulty will be to the next level.

You will then have a maximum of ten guesses but the mystery name will be of any NFL player in its history. The other rules are the same. You need to finish the normal mode first to play it though.

That’s how you play the game. NFL fans regularly keep showing off their Weddle scores on Twitter and other social media platforms. Have you tried it yet? Let us know in the comments section.