Live Action Remake of ‘Pinocchio’ by Disney+, Teaser Trailer Out

When you wish upon a star, what you may get is the first teaser trailer of the action remake of Disney’s Pinocchio. But unfortunately, Pinocchio does not reveal himself in the teaser, we might have to wait a little longer to have a look at Pinocchio himself.

When you wish upon a star…⭐ Watch the trailer for the all-new live action #Pinocchio and stream the movie, a #DisneyPlusDay premiere, September 8 on @DisneyPlus. 🧚🪄 pic.twitter.com/D9x5FDKjBc

Details on the Premiere of Pinocchio

Disney+ has chosen Thursday, the 8th of September as the date for the premiere of Pinocchio, Rober Zemeckis’s live-action adaptation. It stars Tom Hanks as Geppetto and the release time is set a lead-in to the D23 Expo in Anaheim in California.

“Zemeckis directs the live-action retelling of the beloved tale of a wooden puppet who embarks on a thrilling adventure to become a real boy. Hanks stars as Geppetto, the woodcarver who builds and treats Pinocchio (Benjamin Evan Ainsworth) as if he were his son. Joseph Gordon-Levitt is Jiminy Cricket, who serves as Pinocchio’s guide as well as his conscience.”

The adaptation has been co-written by Zemeckis and Chris Weitz, the two are producing the adaption along with Hogue and Andrew Mian.  Jack Rapke, Alexandra Derbyshire, Jackie Levine and Jeremy Johns are the executive producers.

Cynthia Erivo, the Academy Award nominee, plays the role of the blue fairy, Keegan Michael Key will star as ‘Honest’ John, Lorraine Bracco will take up the role of Sofia the seagull who is a new character and Luke Evans will be the Coachman.

First look at the Blue Fairy and Jiminy Cricket in Robert Zemeckis' 'PINOCCHIO.'

The first teaser trailer for the film releases tomorrow. pic.twitter.com/O3PQ9zvdH8

Tom Hanks, the two time Oscar winner has been the one wishing upon a star in the teaser of Pinocchio. Tom Hank’s character Geppetto is an Italian carpenter who brings the titular puppet to life in the re-telling of Carlo Collodi’s 1883 novel by the name “The Adventures of Pinocchio.”

In 1940 Disney debuted Pinocchio’s story through an animated version. At the first glimpse of the reimagined classic, we see Tom Hanks starring as Geppetto adorably creating his wooden puppet and going to bed to wish upon a star for a son. Starlight, star bright, first star I see tonight. I wish I may, I wish I might Have the wish I wish tonight,” he receipts the prayer as from the original film.

The teaser shows how the Blue Fairy, played by Cynthia Erivo enchants the iconic tune to bring the puppet to life and fulfil Geppetto’s wish.

The poster of the upcoming retelling shows Pinocchio as he steps foot on his adventure to become a real boy by using as conscience as his only guide on this thrilling path. The silhouette of Pinocchio depicts him in the same attire as the original 1940s film attire. The look of the character is completed with his iconic yellow and blue cap with a feather poking out. 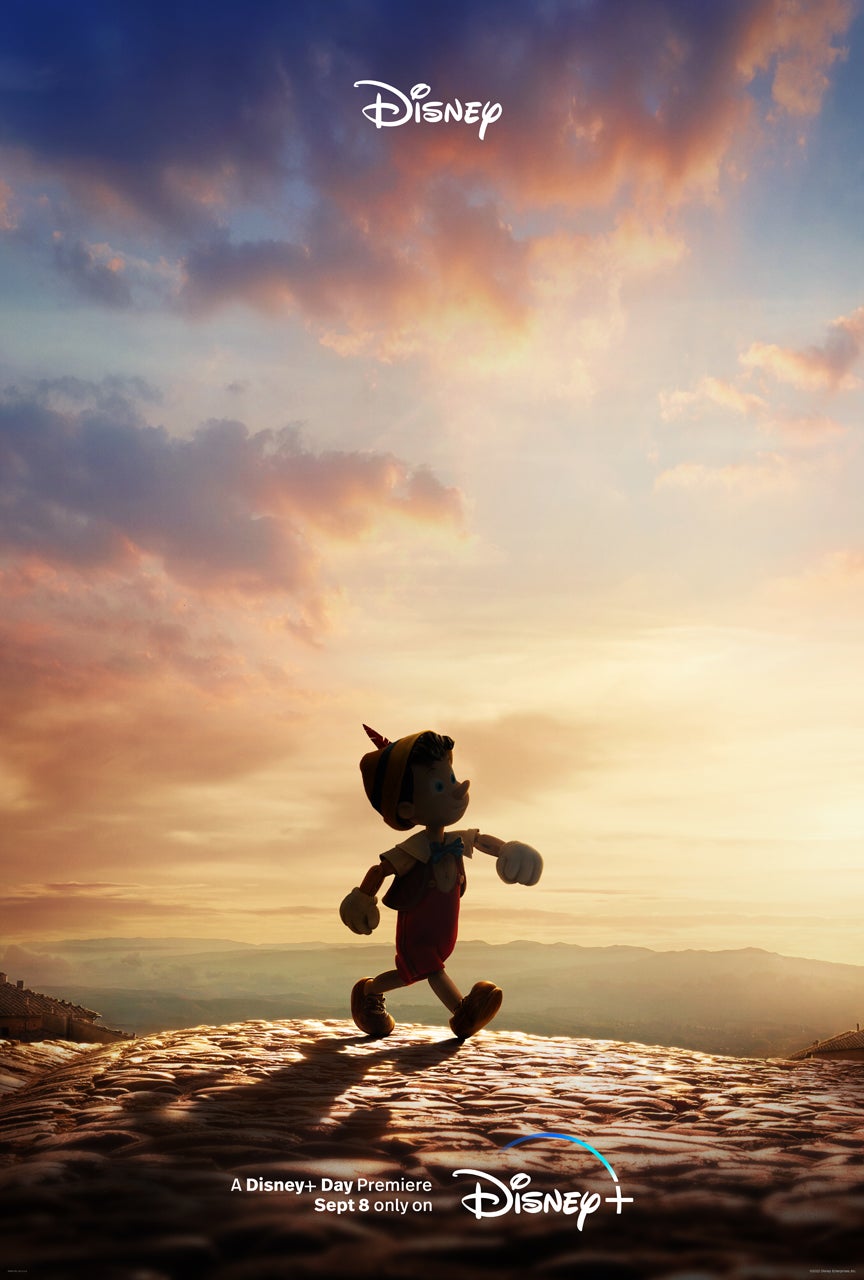 The Live-action remake of the Pinocchio is one of the several re-telling of classic originals in making after the successful debut of Cinderella.