How and Where To Watch One Piece Dubbed

The popularity of One Piece is ever-increasing over years, and it’s the reason the compelling anime series has continued for more than two decades. However, if you’re still trying to find a source to watch it, we’ll help you figure it out. In this guide, we’ll explain how and where to watch One Piece dubbed or subbed in 2022. 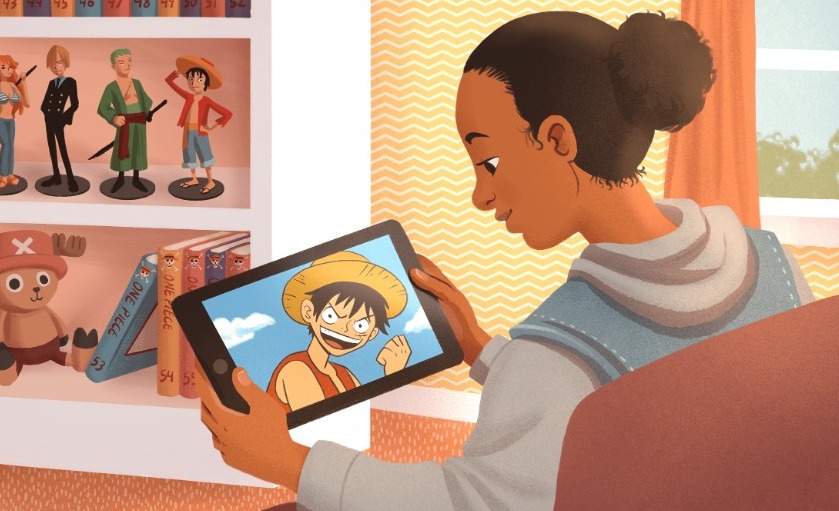 Right now, One Piece is following the story where our beloved Luffy is challenging the strongest antagonist in the series yet, Kaido. The fight is going on as the series has completed the 1000 episodes mark. Although the count of dubbed episodes is lesser.

The dubbed episodes usually arrive later than the original ones. The good thing is there are plenty of them available that if you start watching right now, more will continue to launch by the time you’ll reach the latest ones.

ONE PIECE is a massively popular Japanese anime television series based on the manga of the same name by Eiichiro Oda. Its story follows the adventures of Monkey D. Luffy, a boy whose body gained the properties of rubber after eating a Devil Fruit unknowingly.

He explores the Grand Line in search of the world’s ultimate treasure called the “One Piece” to become the next Pirate King alongside his crew of pirates named the Straw Hat Pirates. One Piece was first aired in October 1999 and crossed the 1000 episodes mark just last year. 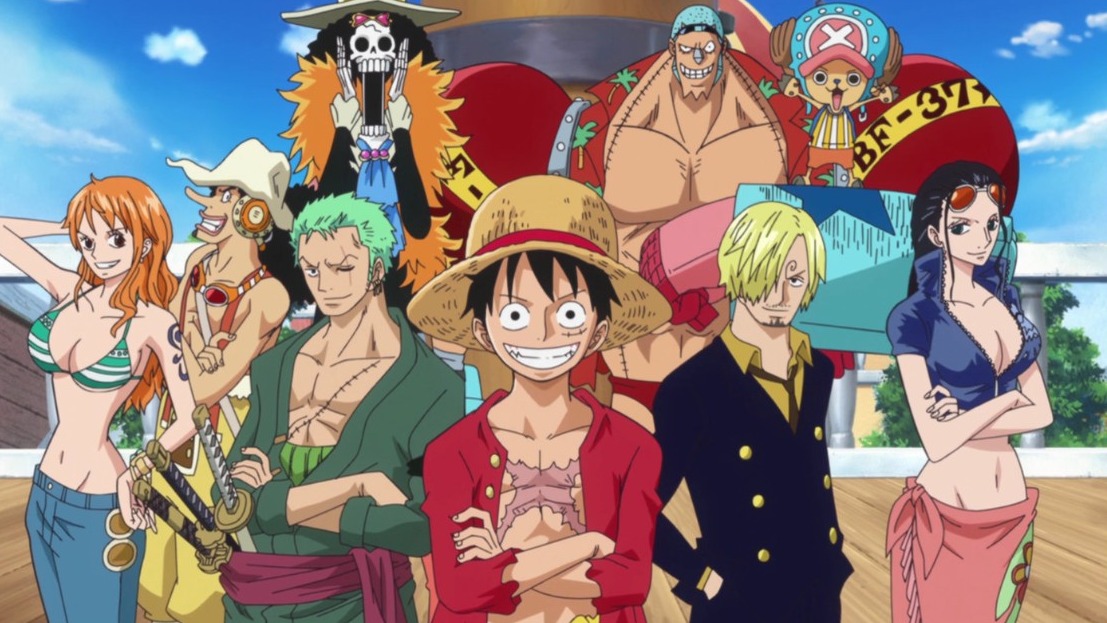 However, the count of One Piece dubbed episodes is just 794 as of July 2022. This is because of the reason that it takes time to dub the episodes accurately and Funimation is currently working on more dubbed episodes.

There are a number of sources to watch both dubbed as well as subbed One Piece episodes including Netflix, Amazon Prime, Crunchyroll, and others. We’ll help you figure you which source would be the best for you to start your binge-watch journey.

Where to Watch One Piece Dubbed Episodes in 2022?

One Piece English dubbed episodes are available on a number of platforms. Some of them require a paid subscription while others are free. We don’t promote streaming pirated content. Thus, we’ll only share the list of official and legal sources here.

Netflix is an incredible streaming platform to watch all sorts of shows and movies. It also hosts a number of One Piece dubbed episodes. However, they are pretty less in number. You can only watch up to the first four seasons of the series.

This means Netflix offers only the first 195 dubbed episodes of One Piece. That too is available in a limited number of countries including the United States, Canada, Mexico, Colombia, Brazil, Argentina, Australia, and Japan. 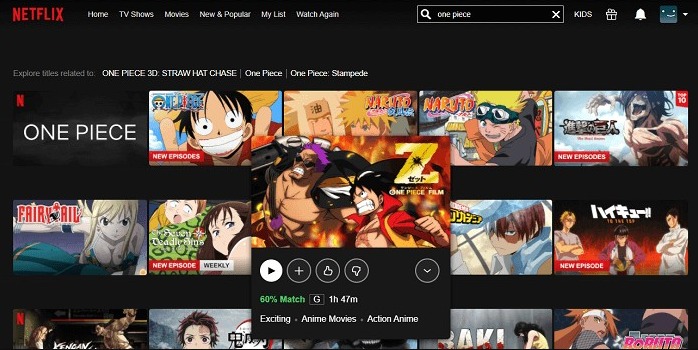 Netflix doesn’t have all the dubbed episodes seemingly due to the licensing and distribution rights. If you’re willing to watch more dubbed episodes, you’ll have to try the alternate sources that we’ve shared below.

Funimation is the best source to watch the maximum number of dubbed One Piece episodes. It has all the 794 dubbed episodes as of July 2022 while all 1,113 of them are available with subtitles.

However, the only issue with Funimation is that it’s available only in a limited number of countries. It’s only available in the United States, Canada, United Kingdom, Ireland, Australia, Mexico, Brazil, and New Zealand for $5.99 a month or $59.99 a year.

Fortunately, Sony has now acquired Funimation and announced the merger of its library with Crunchyroll. This means all the episodes will soon be available on Crunchyroll as well.

Crunchyroll is another Sony-owned platform featuring a massive library of anime content including One Piece, Naruto, Fairy Tale, and various others. It has all the 1,113 episodes of One Piece with accurate English subtitles.

After Sony’s merger of Funimation’s library with Crunchyroll in March 2022, all the dubbed episodes of One Piece are also available on the service. 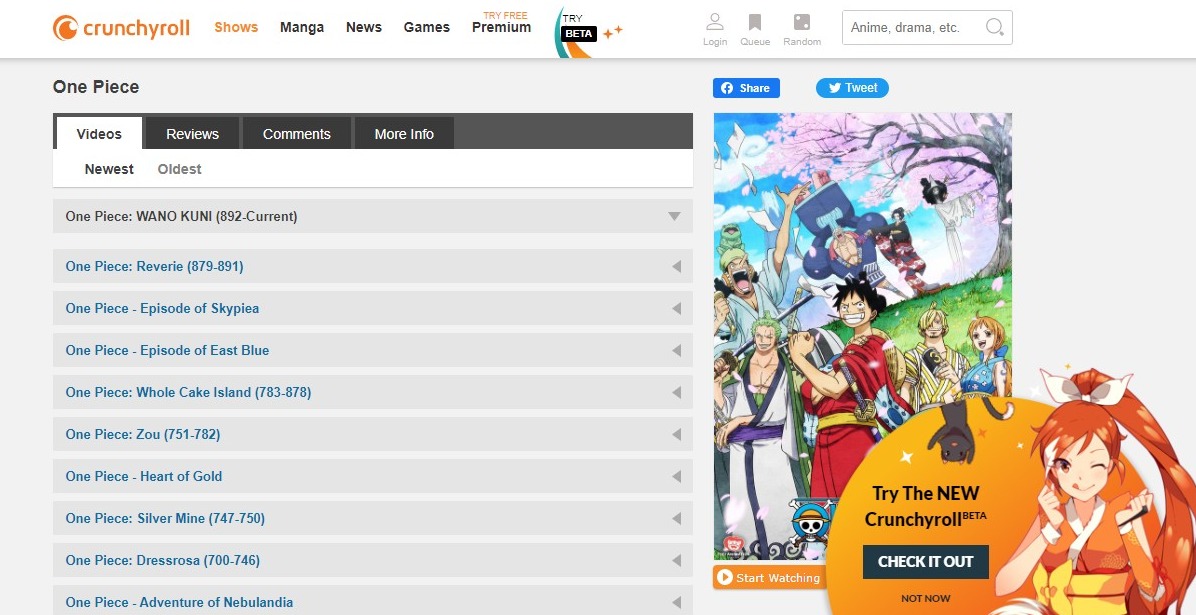 However, Crunchyroll’s full anime and manga library are exclusive to the United States. You can’t find all the videos in the UK, Canada, Australia, or any other country. You also have to buy the subscription costing $7.99 per month.

Crunchyroll also offers a 14-day free trial. If you’re in the US, Crunchyroll is the best source to watch all the One Piece episodes alongside Funimation. Sony owns both of them now. 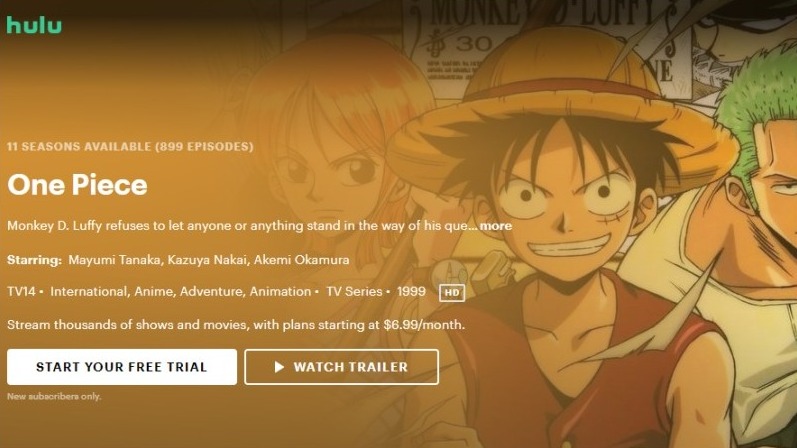 After that, you’ll have to consider switching to either Funimation or Crunchyroll depending on your region. 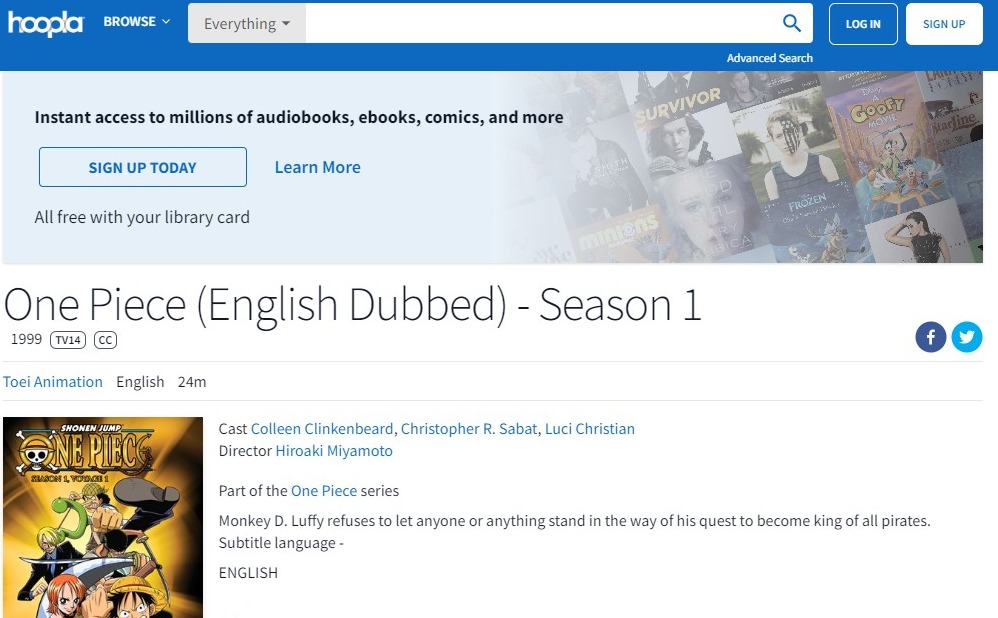 When you borrow an item on Hoopla Digital, you have to pay around $0.99 to $2.99 per title. It still isn’t better than watching One Piece on Funimation or Crunchyroll.

Amazon Prime Video is another amazing streaming platform featuring a massive library of shows and movies. However, Prime Video doesn’t have much to offer for One Piece fans. It only consists of the first 130 dubbed episodes in a limited number of countries.

Other than that, you can rent or buy One Piece episodes on Amazon Prime. Most of the episodes cost around $1.99. Thus, it isn’t a very pocket-friendly and convenient way to watch One Piece.

Disney+ itself doesn’t have any episode of One Piece. However, you can buy the Disney Plus Streaming Bundle which includes access to content on Hulu. And, Hulu has a number of One Piece episodes available.

Therefore, you can watch One Piece dubbed episodes if you’ve subscribed to the Disney Bundle via Hulu.

Where to Watch One Piece Episodes with Subtitles in 2022?

Funimation has dubbed One Piece episodes in the English language only till number 794. If you’ve watched till episode 794, you have two choices- wait for more English dub episodes to release or switch to watching original One Piece episodes with English subtitles.

Funimation and Crunchyroll are the two best platforms to do that if you’re in the US, Canada, the UK, or anywhere in the Western world. 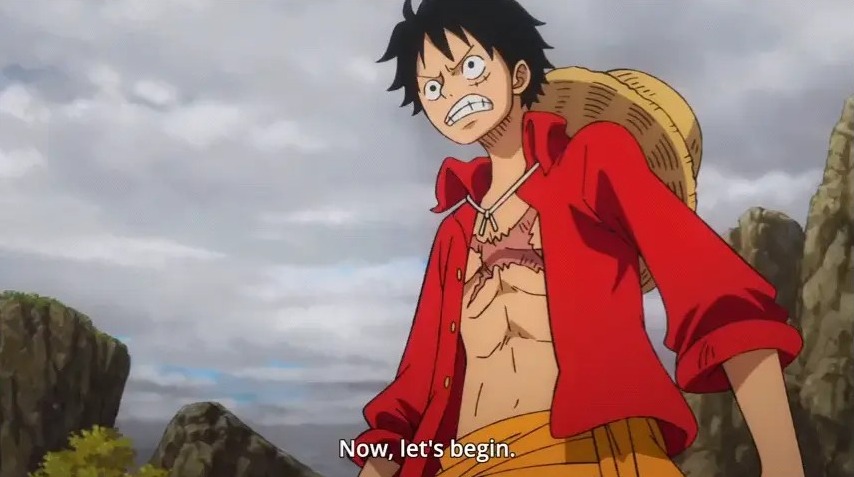 Funimation owns the rights to the One Piece anime in North America for streaming, home video, and recording their own in-house English dub. Since Sony now owns both Funimation and Crunchyroll, it has decided to merge their libraries.

Thus, you can watch all subbed episodes of One Piece with accurate subtitles in English on both Funimation and Crunchyroll. However, you must purchase a subscription before starting to stream.

Where to Watch All One Piece Movies in English?

Out of those, 6 are available to stream while the remaining 4 are in the shop. This means you have to purchase their DVDs from the shop section. You must watch One Piece movies in order to understand everything better. 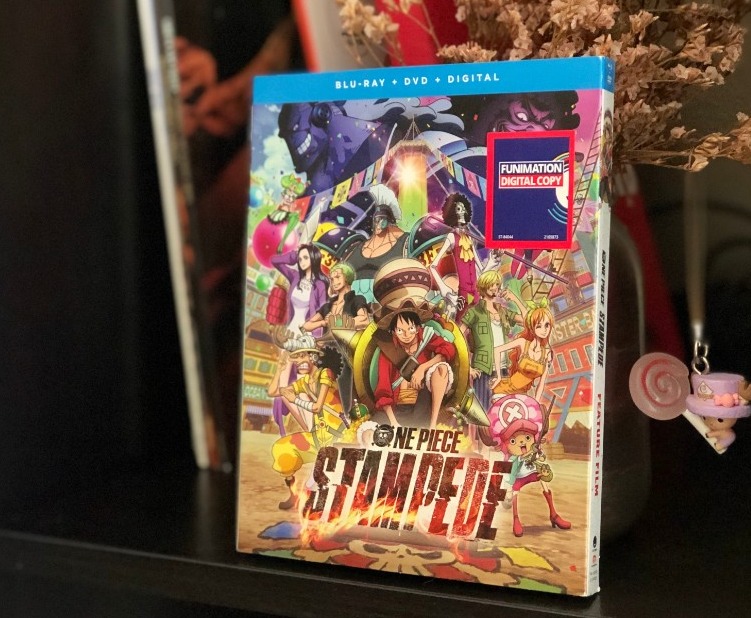 Here’s the list of One Piece movies available on Funimation:

Available in the Shop Section as DVDs:

Both the platforms also feature a number of One Piece movies and are available in the US. If you’re planning to buy a subscription, you can get Funimation which costs only $5.99 per month.

In addition, you’ll also get a special deal to get 60 days of Crunchyroll Premium free as a way to welcome Funimation to the new Crunchyroll family. If you qualify for the deal, Sony will send you an email with a unique link to redeem the offer.

That’s all for this guide. Now go and start binge-watching possibly the greatest anime in history. Feel free to share some great anime recommendations in the comments section.