Apple Watch Series 8 is still months away but general speculation has started about its design, specs, features, price, and release date. The leaks and rumors have also started coming in. Find out everything we know about Apple’s next wrist-wearable device here.

Apple has been announcing a new version of its smartwatch every year since 2016, and the Series 7 launched last year in September alongside iPhone 13 lineup. Apple is reportedly planning to turn the next smartwatch into a revolutionary piece with certain very useful health features, a Mindfulness app, and more inclusions.

It is also planning to use the flat-edged redesign that many Apple fans are expecting. There are also reports that Apple will also launch a rugged version of the smartwatch focused on sportsmen and athletes, and the next economical variant, namely, Apple Watch SE 2.

Apple Watch Series 8: What is the Release Date?

Apple hasn’t confirmed the release date for Apple Watch Series 8 yet. However, judging by the previous launches, they tend to launch the smartwatch in September every year alongside the new iPhone lineup.

According to Jon Prosser, Apple will launch new products on Tuesday, September 8 through press release at 9am EST. Potential new products include a new iPad and Apple Watch pic.twitter.com/sLgDoPshWJ

So, we are expecting that Apple Watch 8 will arrive during the second week of September 2022, along with the upcoming iPhone 14 lineup. There have been no talks about the next smartwatch at the recent Apple Peek Performance event either.

Apple hasn’t made many changes to the core design of the Apple Watch since its debut. The design has visually remained unchanged, only the iconic squircle was customized with the last model to sport larger displays in a curvier chassis.

However, there are rumored designs making rounds on the web, one from LeaksApplePro on Twitter, that Apple Watch 8 won’t have many differences in design from the Series 7, and there would be very few differences. The Set of parallel openings instead of just one would be the only noticeable change.

Told you it was disappointing.
Upon receiving CAD files and images, this will be the only noticeable change in design from the Series 7 to the Series 8.
More info soon at @iDropNews pic.twitter.com/GQC40eIwk3

Ross Young, a renowned Display analyst suggests that Apple Watch Series 8 will come in three sizes, instead of the regular two. The new third size would be a larger one alongside the 41mm and 45mm size variants. 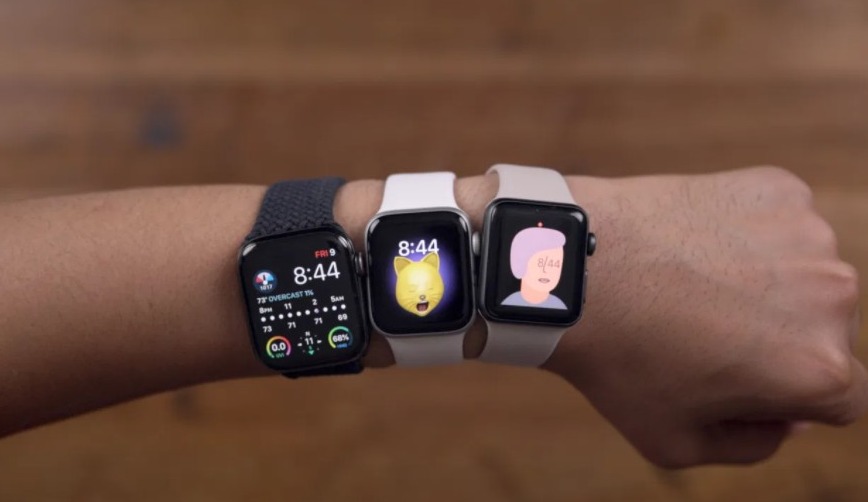 There are also speculations that the Apple Watch 8 could follow the design concept of the latest flat-edge iPhones. Prominent insider, Jon Prosser, has also shared a series of renders previously that support a similar design before the launch of the Apple Watch 7.

However, he further mentioned that the design could be developed for future smartwatches, and it is likely that Apple Watch Series 8 may utilize it.

Apple is reportedly developing a rugged variant of the Apple Watch which is specifically designed for sportsmen, athletes, and people who regularly indulge in outdoor physical activities. This Rugged Apple Watch would also launch alongside Series 8.

It will be a tougher, more resistant, and more protective variant of the regular Apple Watch. The appearance will also be sturdier than ever. 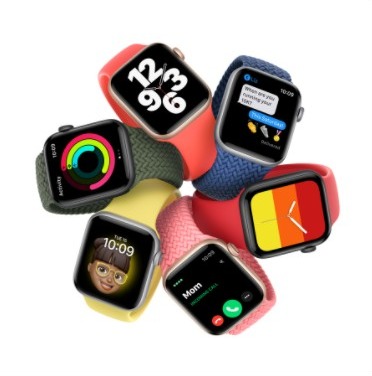 Mark Gurman from Bloomberg has also reported that Apple is developing a rugged smartwatch and the next Apple Watch SE. The Apple Watch SE 2 will be the entry-level version with a more affordable price tag. He has also claimed that all three models will launch together.

The Apple Watch Series 8 will likely use a faster SoC to bring performance improvements as the previous model didn’t feature any changes. It would still use the Retina LTPO OLED with 1000 nits peak brightness and 326PPI.

The next Apple smartwatch is also expected to run on WatchOS 8, or 8.5 if it is available at the time of launch. Apple is reportedly developing multiple new health features for the upcoming smartwatches, according to The Wall Street Journal. 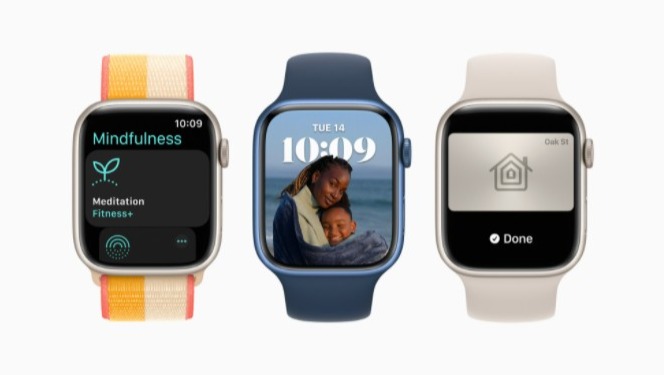 These upcoming features include blood-pressure monitoring, a thermometer for fertility and sleep tracking, sleep apnea detection, and diabetes detection (Blood Glucose monitoring). However, it is unknown how many of these will be available in Watch 8.

Apple is also working on a car crash detection feature for the Apple Watch that might be available this year. It will use sensors like the accelerometer to detect car accidents and then report them to emergency contacts. There are high chances Apple Watch Series 8 will have it.

According to The Wall Street Journal’s Rolfe Winkler, Apple is planning a new feature that would allow an iPhone and Apple Watch to detect a car crash and automatically dial emergency services in 2022. The feature would utilize device sensors such as the accelerometer pic.twitter.com/UdVAkaNpxR

There are also reports that Apple will add a temperature sensor to the Apple Watch this year, however, Bloomberg is mentioning that the company has scrapped that plan for now. Bloomberg’s Mark Gurman is suggesting the Apple Watch 8 will feature major “Activity Tracking” updates.

What do the Apple Patents Reveal?

Apple has filed patents for several noteworthy technologies that they could use in the next Apple smartwatches. However, it isn’t certain if they’ll use them in Series 8 or not.

The first one is a patent for biometric authentication that would identify the wearer’s skin pattern for identity verification and would eliminate the need for a passcode for unlocking the device. 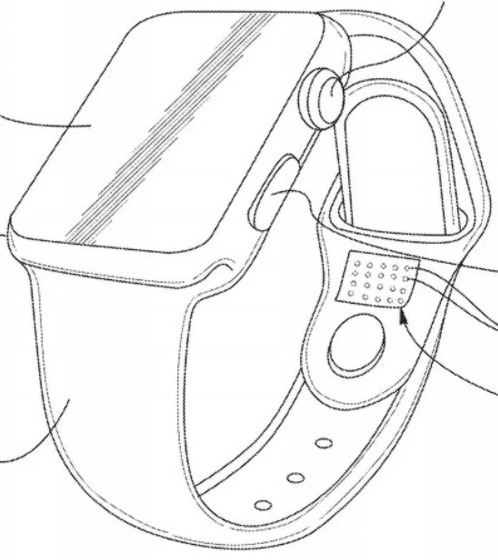 Another patent is for a self-tightening Apple watch band that will be adjustable according to the situation. When you are participating in intense activities like running or exercise, it will tighten up to measure accurate heart readings. However, it would later loosen itself automatically as you relax. 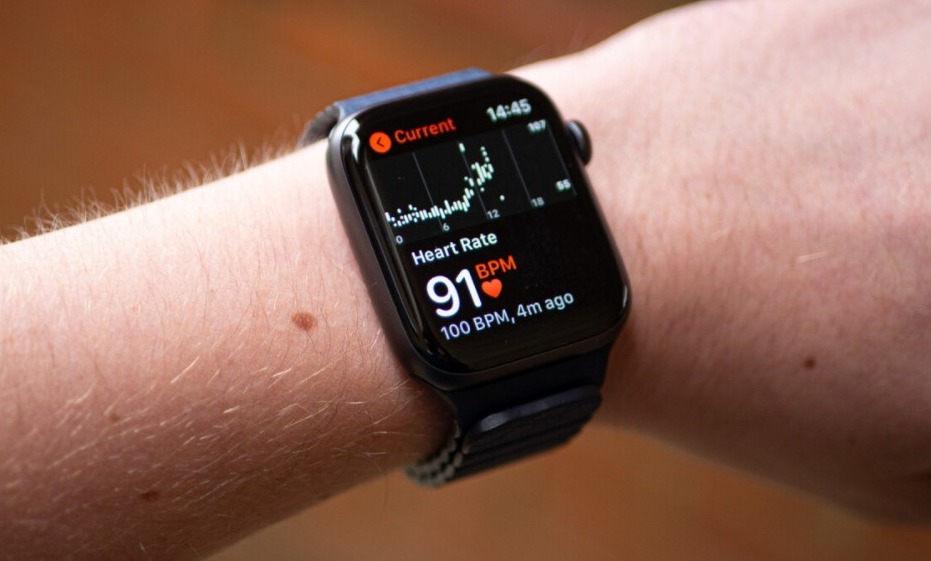 There’s another patent that adds an LED indicator on the Apple Watch band to visualize the progress of an activity or task. The company has also patented a sensor for its Watch that could monitor the symptoms of Parkinson’s disease, while there’s one more patent for the under-display camera for the smartwatch.

Apple has been using the same price concept for the Watch series for several years. We expect that the price will still be the same this year as well. This means that Apple Watch 8 could be available for a price tag of $399 for the base model with a 41mm size.

Should i buy @Apple watch series 7 silver stainless steel or should i wait for series 8 to come in 2022?

The price for larger models will increase. It’ll be interesting to see the price of the rumored third and larger variant. There are rumors available suggesting that Apple Watch SE 2 could feature a slight change in price. It’ll be available in the range of $279 to $329.

As we’ll near Apple’s September launch event, more details will be available for the upcoming Watch Series 8. We’ll keep updating them here. Make sure you keep checking us frequently.