Apple has announced and unveiled the first look at the new and redesigned MacBook Air and the new MacBook Pro at the WWDC 2022. The next generation of MacBook will be powered by the powerful yet efficient M2 Chip, which is also unveiled during the keynote. 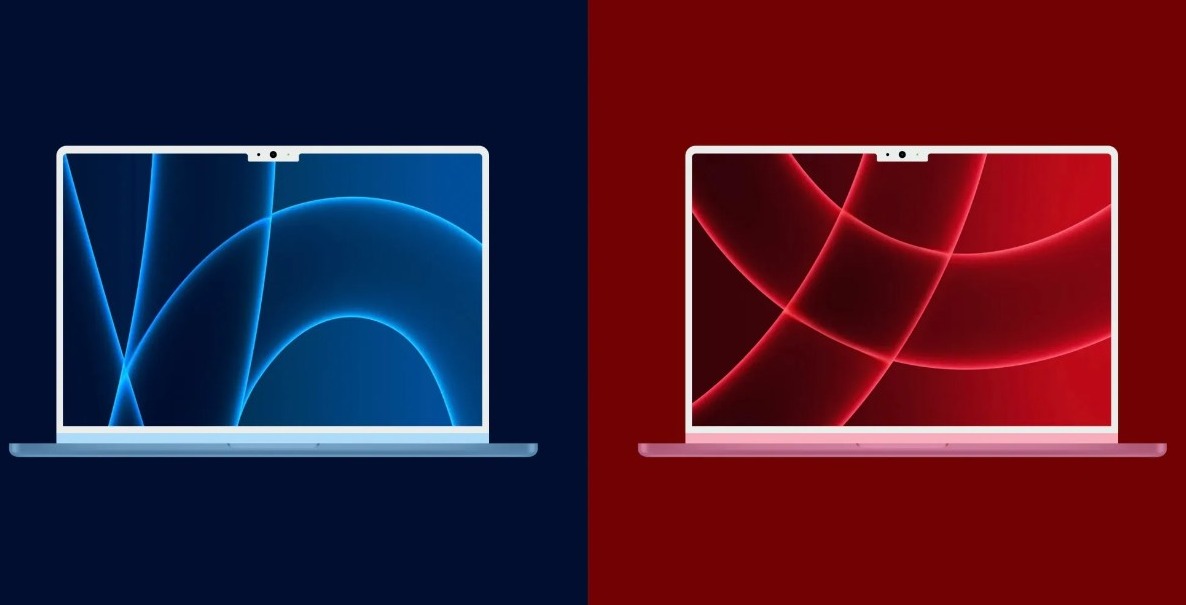 Traditionally, the Worldwide Developers Conference isn’t an event where tech-enthusiasts expect many hardware announcements. However, this year’s edition has been surprising as Apple brought plenty of groundbreaking declarations.

The new MacBook Air features a brand-new design that resembles more to the 14-inch MacBook Pro with its extensive squared-off look replacing the wedge shape. Whereas, the new MacBook Pro, powered by the M2 Chip, boasts a similar design to its current-gen model.

Here’s a brief first look at both the newly announced MacBook variants.

The new MacBook Air (2022) will be powered by the all-new M2 Chip in a redesigned unibody enclosure. It will also pack a brighter display with a notch and smaller bezels, and is built from the ground.

The latest MacBook Air is available with an 8-core CPU and up to a 10-core GPU. You can configure it with up to 2TB of SSD storage alongside 24GB of unified memory. Apple claims the new MacBook Air will sport around 18 hours of battery life. 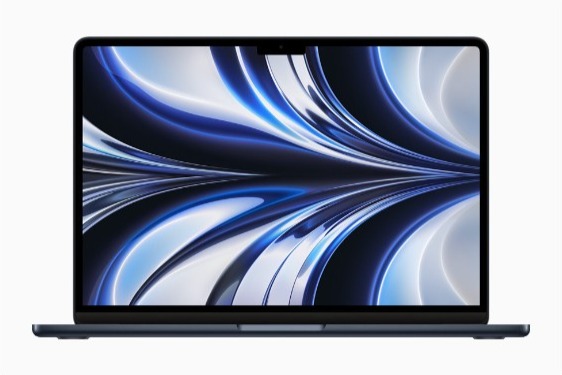 The MacBook Air, equipped with the next-gen silicon, also adds a new 1080p FaceTime HD camera with a larger image sensor and more efficient pixels. It will allow the device to provide twice the resolution and low-light performance of the previous generation.

There’s also a four-speaker sound system that is completely integrated between the keyboard and display to deliver an incredible audio experience. The three-mic array will capture clean audio using advanced beamforming algorithms while the speakers deliver enhanced stereo separation and vocal clarity. 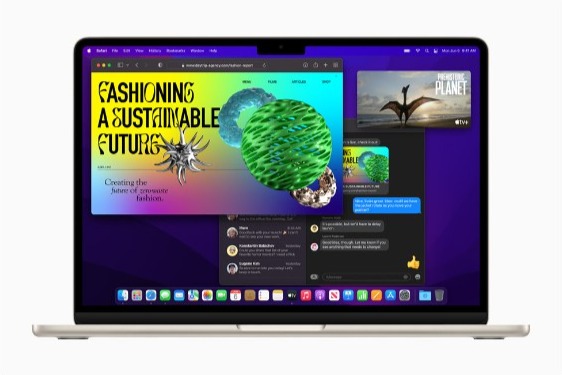 It also features a Magic Keyboard that includes full-size function keys and a Touch ID  button for fingerprint authentication. Apple has also re-introduced MagSafe to MacBook Air by giving users a dedicated and convenient charging port.

Apple has completely redesigned the all-new MacBook Air which is now available in four color options- Silver, Starlight, Space Gray, and Midnight. It features a striking thin design that appears similar to the 14-inch and 16-inch MacBook Pro models. It weighs only 2.7 pounds and is 11.3mm thick.

The new MacBook Air features a slightly larger 13.6-inch Liquid Retina display with a notch and smaller bezels. The display has been expanded closer to the sides and up around the camera to create more space for the menu bar.

It offers up to 500 nits of brightness which is 25% brighter than the previous generation. The display also supports 1 billion colors now allowing photos and videos to look more vibrant. 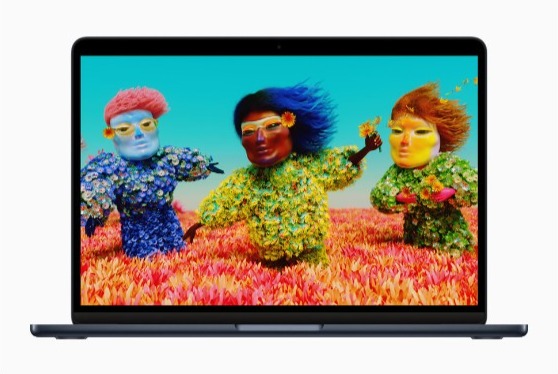 Aside from the display, the MacBook Air (2022) has a fanless design with a MagSafe connector and two Thunderbolt ports on the left side, and a headphone jack with support for high-impedance headphones (thankfully), four speakers, and three microphones.

The new MacBook Air with a fresh design and M2 Chip will start from $1,199 in the United States and Canada. It will be available in the market next month (July 2022), while the previous-gen MacBook Air with the M1 Chip will be selling for $999.

Apple has also unveiled the new MacBook Pro which will also be equipped with the mighty M2 Chip inside its compact design. The new pro notebook will also boast similar features to the new MacBook Air while offering even greater performance and efficiency.

It will boast a faster 8-core CPU and 10-core GPU and a battery life of up to 20 hours on video playback. This machine will allow users to work with RAW images in apps like Affinity Photo at around a 40% faster pace than the previous generation. 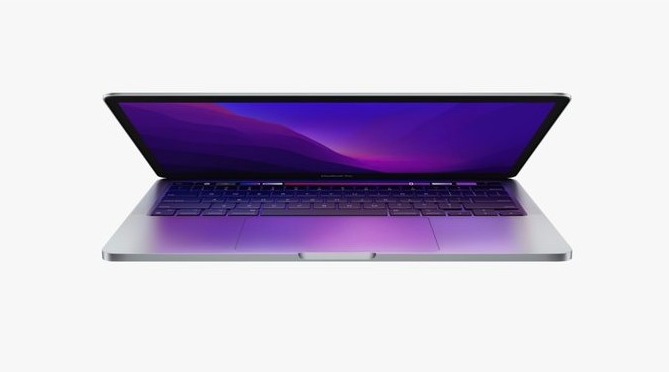 The new 13-inch MacBook Pro is also suitable for gaming as it allows resource-heavy games like Baldur’s Gate 3 to run at a 40% faster speed than the previous generation. It also boasts an enhanced active cooling system.

With the power of M2, it is also capable of supporting up to 24GB of unified memory and allows users to play back up to 11 streams of 4K and up to two streams of 8K ProRes video with M2’s media engine’s support for ProRes encode and decode. 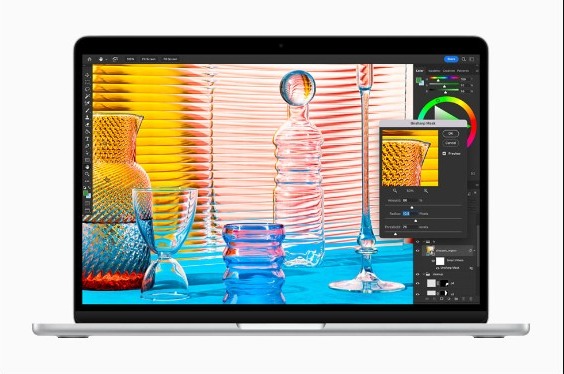 Both MacBook Air and MacBook Pro will be running on macOS Monterey, which allows an even enhanced performance and productivity for users. The MacBook Pro still has a touch bar and retains its core design.

The new 13-inch MacBook Pro will also be available in the markets from next month (July 2022) with prices starting from $1,299 in the United States. There are no details available about the pre-orders yet. We’ll let you know once Apple shares the details.

How to Spot Fake AirPods? Follow this Easy Guide

What is Clear Mode on TikTok and How to Use it?