Google officially unveiled the Android 13 at the recent I/O showcase on August 15, 2022. The latest Android operating system boasts some incredible features and functionalities that are worth checking. Here are the 15 new Android 13 features that you must know. 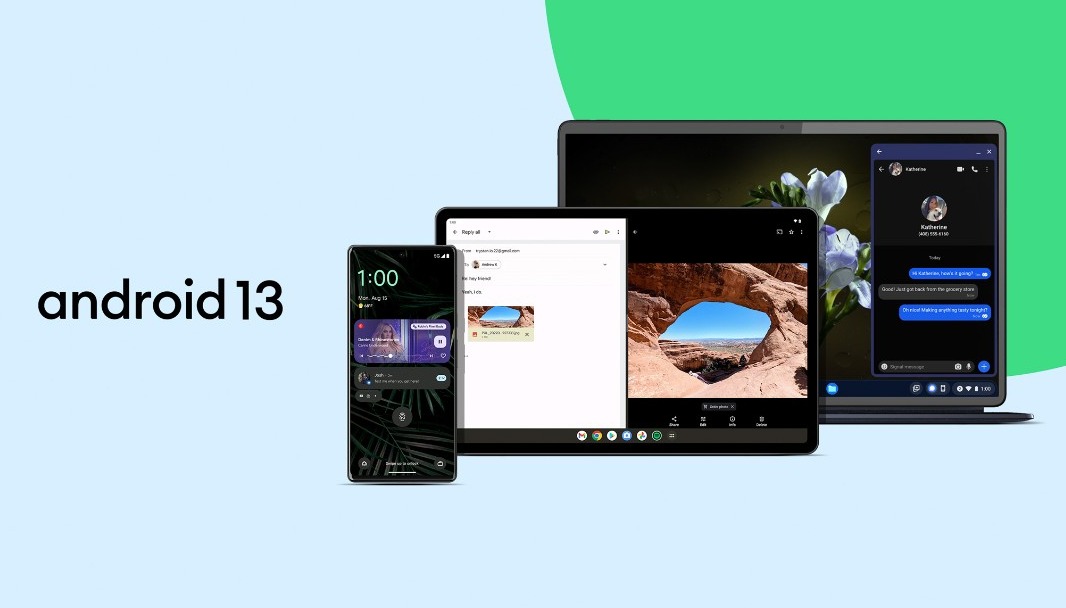 If you have a Google Pixel 4 or later, then you can already try out the newest Android OS. It’s also available on the coveted Google Pixel 4a. Other smartphones will also get updated throughout the year.

Google Pixel 6a was among the first to get it. Android 13 is also set to power the upcoming Pixel 7 and Pixel 7 Pro. For the curious, Android 13 was developed under the codename “Tiramisu” if you were wondering about its sweet name.

For the unaware, Google dropped naming the new Android OS after sweet treats from Android 10. They just stick to numbers now. However, this was the first time in a while Google has been so upfront with the sweet-based codename.

Let’s move further to the features. We have sub-categorized them among divisions.

Let’s have a look at the key design-focused changes and new features of Android 13:

The latest Android OS extends the available color-theming options of Material You with four new palettes. They are related to specific shades and complementary hues.

You can take a look at them here: 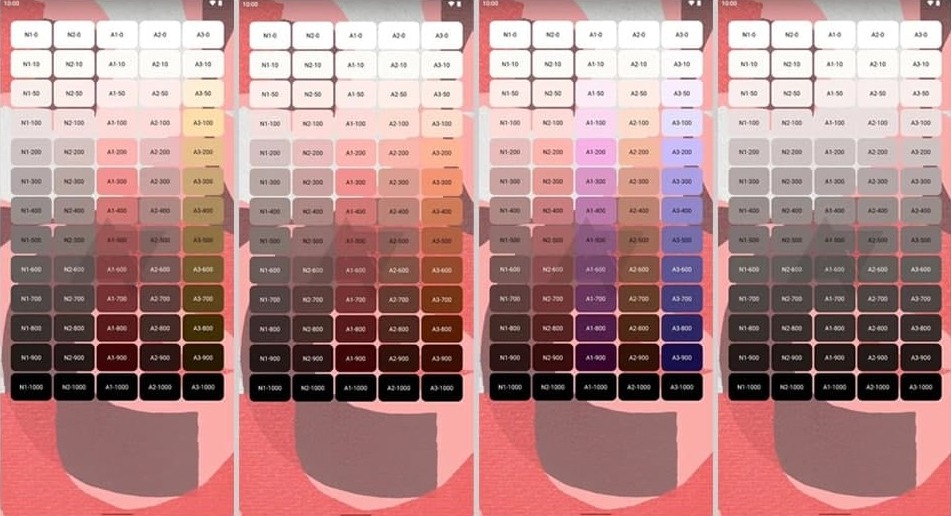 The first two seem to be pretty similar while Expressive and Spritz are incredibly different from the previous operating system’s themes. One is more color-leaning while the other offers a more neutral choice.

2. Auto-Theming Icons with Material You Themes

Google now allows you to auto-theme your icons just you theme the rest of the interface of your device simply by applying Material You themes. However, there’s a big catch. This cool feature is currently limited to Pixel devices, for now at least. 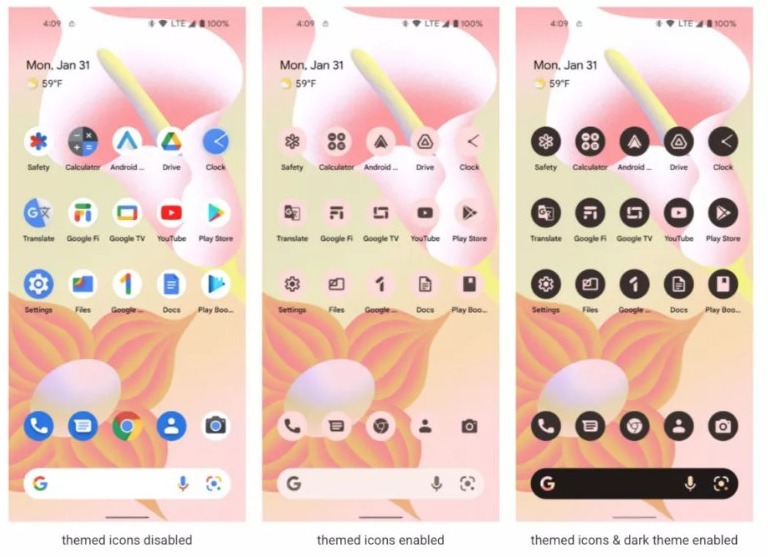 Another catch is that this feature will only work with apps in which the developer has specifically included a monochrome icon for Material You. Thus, you shouldn’t expect a dynamic auto-theming experience just ye

Android 13 introduces a new and updated “Now Playing” widget. It still appears in your notification area but with an overhauled appearance. 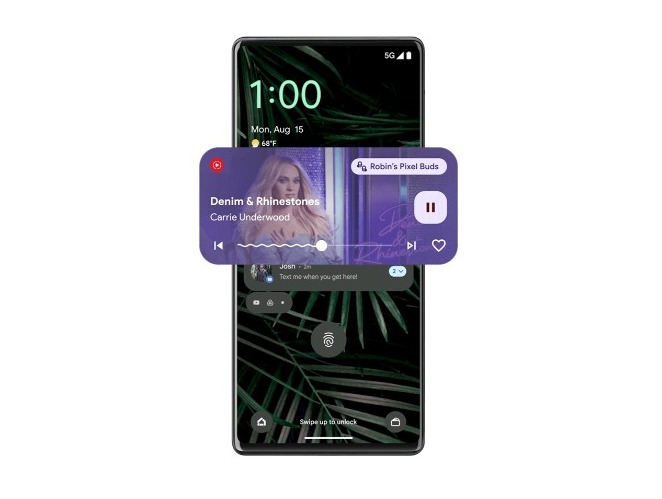 The Album Art now takes up the complete background of the widget while the controls have been moved around slightly.

Android 13 users get an additional new clock setup on the lock screen alongside the existing one. You can toggle between two clock styles by heading over to  Settings > Display > Lock Screen. 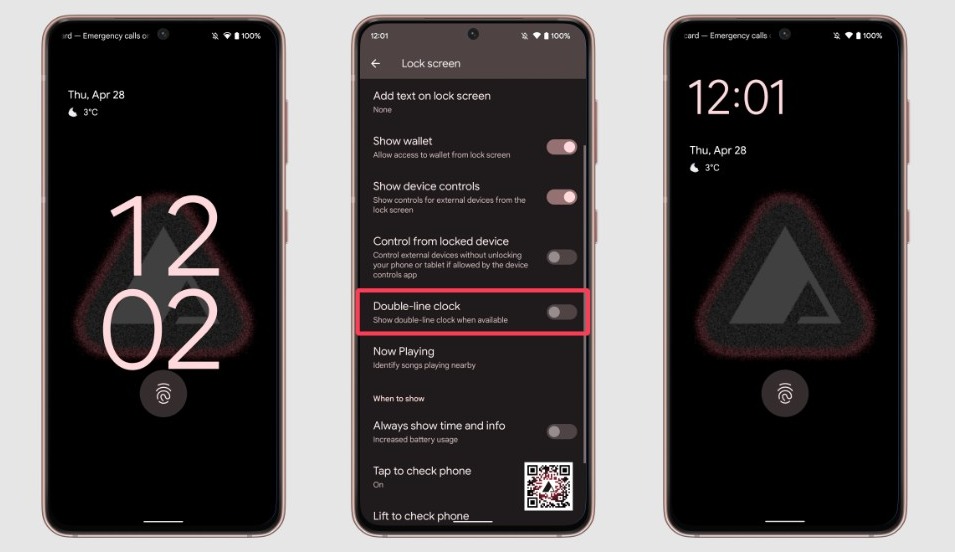 The current one is a double-line layout while the alternative is a single-line layout. This isn’t a major change but definitely a good one.

Android 12 and older required users to give apps permission to access certain features like the location, the camera, and the mic. Now, Android 13 will do the same thing for notifications. 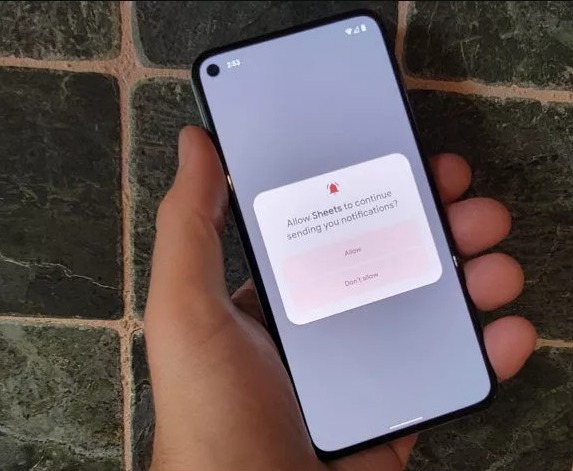 You’ll have to grant apps to show notifications on your screen. This would save you from unwanted and unnecessary alerts when you install a new app.

Android 13 is making the Document Picker more secure by providing it access to just the documents you choose. Previously, it had access to all your documents. Other than that, it hasn’t changed much.

This change will also be applied to Android 11 and Android 12-based devices soon.

A major change in Android 13 is the permissions system for different media types. On Android 12 and older, when an app wants to access media files saved to a device’s local storage, it needs to ask for single permission that gives access to all sorts of media.

However, on Android 13, it’s changing. The apps will have to ask for specific permissions for each media type. The permissions are as follows: 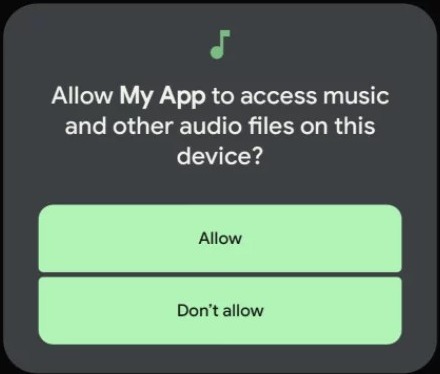 This is a pretty good feature to keep your documents and files saved on your Android device’s storage.

On Android 12 and older, apps used the location permission to locate nearby WiFi devices. This is pretty insecure and may lead to future compromises. However, Android 13 has fixed this. 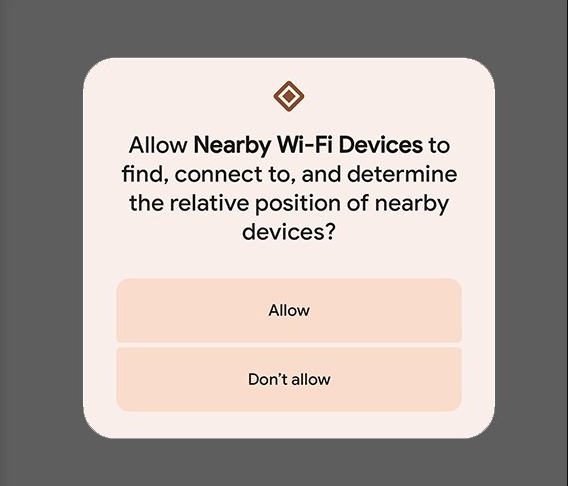 Fast Pair is one of the highlights of Android 13. It allows your device to quickly pair your Android device to accessories like Bluetooth headphones, Samsung Galaxy Watch 5, and others. 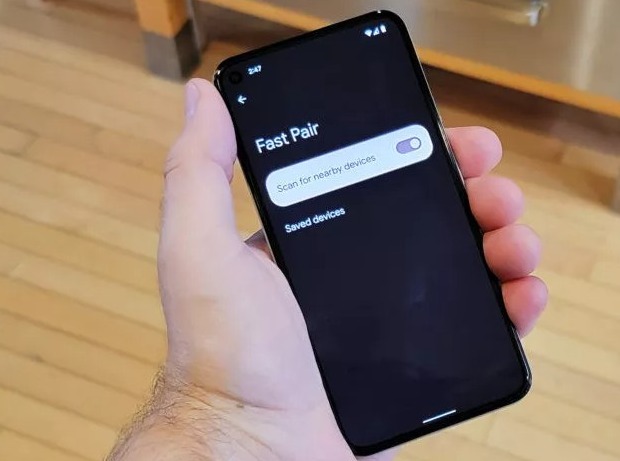 You don’t have to manually add them as your phone can simply alert you and ask for pairing. Fast Pair is built right into the latest OS for a swift experience.

Android 13 offers a boost to wireless audio as it has integrated support for Bluetooth LE Audio and Low Complexity Communications Codec (LC3). 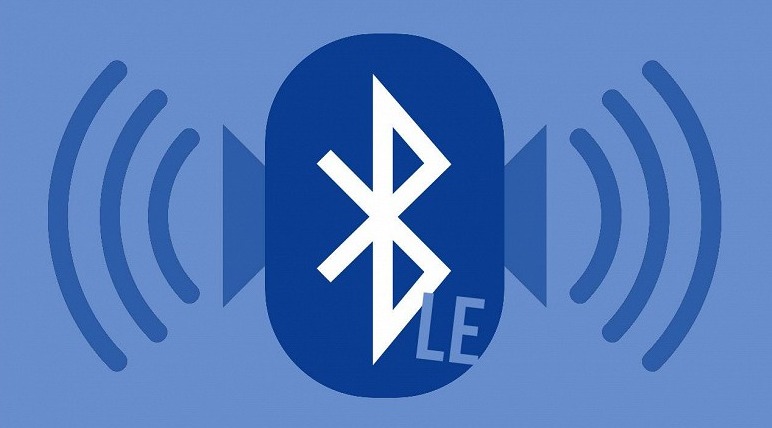 It will also help with lower power usage and improved audio quality across supported devices. 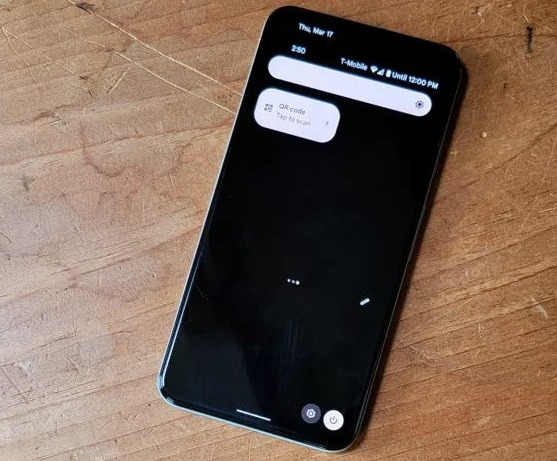 There is also a quick toggle to launch a simple QR scanner directly from the notification tray. You won’t need a separate app anymore.

Google has also reworked the audio output selector with Android 12. The change is more aesthetic than functional but it fits better with the Material You theme schemes now.

You can easily switch between different audio output types with Android 13.

Android 13 allows you to set specific languages for specific apps which will be separate from the system language.

This is a pretty useful functionality if you are multilingual and regularly find yourself switching between languages.

Android 13 lets you control your smart home appliances without having to unlock your phone. For that, you have to go to the Lock Screen section of Android Settings and switch to the required toggle. It is “Off” by default for privacy and security-related reasons.

Previously, users had to unlock the phone even when the toggle was right on the lock screen. Don’t forget to keep the right controls on the screen though.

Android 13 has also redesigned clipboard features and made it more immersive. When you cut or copy some text in the new OS, you’ll see a new alert box in the lower-left corner. This will give you a visual representation of what you have copied or cut. 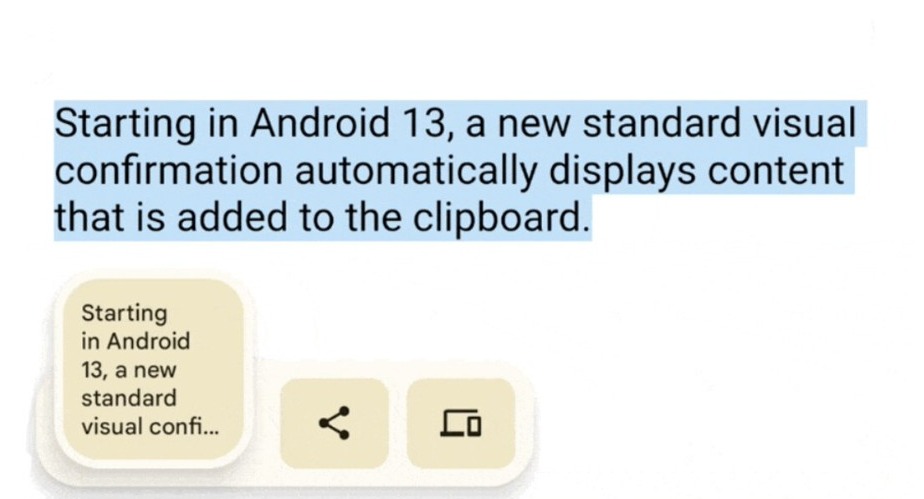 You can also tap on the pencil icon to edit the text directly from the clipboard. You’ll get the updated version when you paste the text.

There’s another text-related update on Android 13. The system now auto-clears any item on the clipboard that is older than one hour. Make sure you save your copied text in the notepad to not lose important stuff.

Google has also included a number of hidden features ranging across all domains. There are also easter eggs in the latest update. The easter egg was initially introduced with Android 13 beta 3.3, and it’s still here.

You can access it by going to Android Settings, tapping on “About Phone,” and then tapping on the “Android number version” until you see a clock. After that, adjust the clock’s hands to 1:00 PM and the easter egg will be summoned. We won’t spoil it for you (Don’t forget to tap and hold on to the bubbles though).

Apart from that, Google has now made it easier to format Japanese text to make it more readable. Non-Latin scripts including Tamil, Telugu, Burmese, Tibetan, etc, also look better and more adaptive.

Fonts and emojis will also render quickly and appear virtually great in all sizes with COLRv1 support. Google Wallet has also been revamped. There are a number of bug fixes and optimizations as well, especially for Chromebooks, watches, TVs, cars, and smart home devices.

When will your Android devices get Android 13?

Android 13 will be rolled out to all eligible devices throughout 2022. If your device is eligible, you will get the update before the end of this year. You’ll receive an alert from Google itself and your phone’s manufacturer to update it. 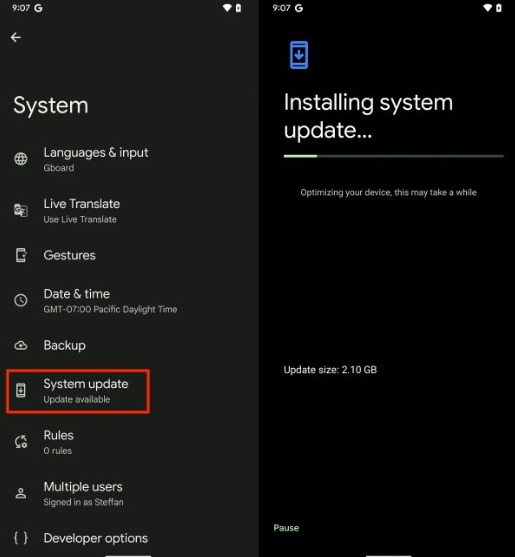 Once available, you can update your device and enjoy the most seamless Android experience ever. Just head over to system settings and install the latest update.

Which one seems to be the most useful feature out of the 15 listed above? Feel free to use the comment box.