NBA Referee Salary: How Much Do they Earn?

While players are the main source of excitement for the fans Referees are the pillar that helps in maintaining the flow of the game. Referees often go unnoticed but their presence is what keeps things in control.

Referees in general do have a lot of authority in sports. In NBA, on the court, the referee is the one with the highest authority. He makes the decisions and can even eject players if they see something they do not like.

In NBA there are 7 officials for every game. One crew chief, two referees, one official scorer, two trained timers, and one replay center official. As of now, there are 75 full-time officials for the 2021-22 season.

How Much Does an NBA Referee earn?

There is no fixed figure which is consistent among all referees as they are paid on the no of games officiated. However, there is a defined range for officials according to their roles and experience in the league.


As you can see the professional referees are the ones are with the highest salaries. Their annual salaries range from $180,000 to $550,000 per season. The comparatively newer refs who have just made the way to the league are paid less.

Well, the refs are sure paid handsomely. Although if you compare it to the players the max salaries of refs are still lower than the minimum salary offered to a player. The minimum contract for an NBA rookie is set around $900,000.

Do referees need to be paid more?

NFL offers around $200,000 yearly, MLB offers $300,000 and NHL offers $280,000 approximately to their referees. Considering that the NBA is offering higher compensation it seems fair to say the officials are handsomely compensated. 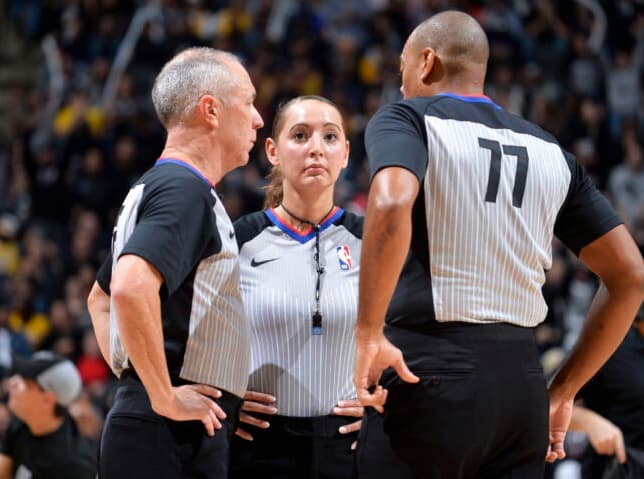 In contrast, there is an opposite situation in WNBA where both the players and the refs are being paid less. The average salary for a WNBA player is around $200,000 which is lower than the salaries of newer male referees.

This is something that NBA as an organization can work upon for the future.

What does it take to be an NBA Official?

These are some attributes you need to have if you’re looking forward to the role.

This should give you good insights about referees in the NBA. Let us know in the comments about any more interesting aspect of the NBA that you would like to know.