Persona 5 Royal is an enhanced version of 2016’s Persona 5, a role-playing video game featuring dungeon crawling elements and social simulation scenarios. It’s already available on the PS4 and set to launch on PS5 and other platforms this year. 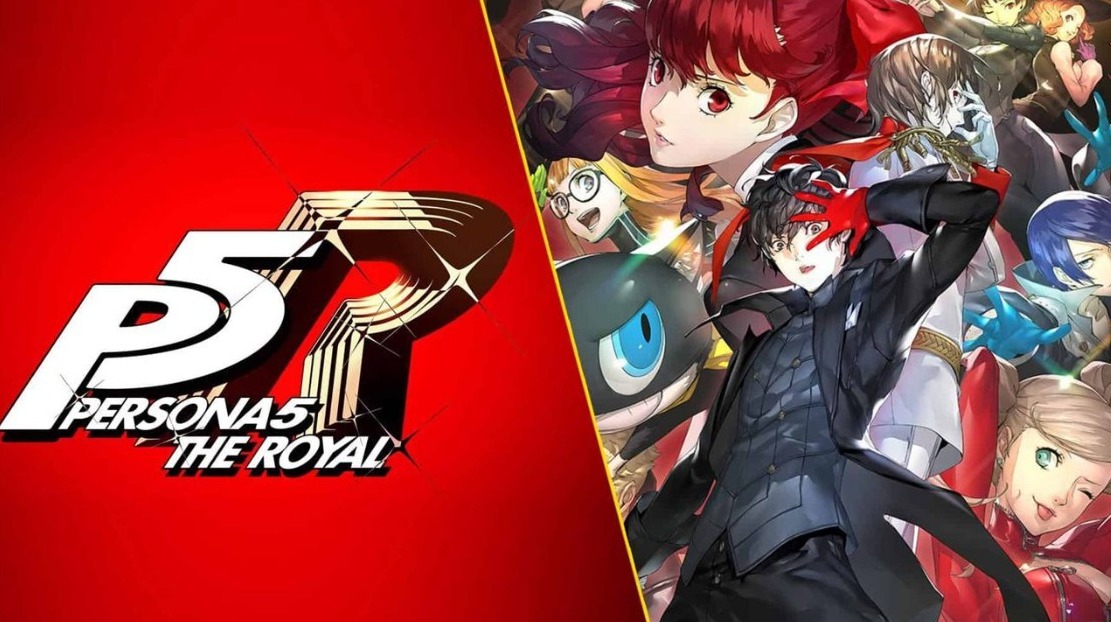 However, developer Atlus has confirmed that Personal 5 Royal PlayStation 4 players won’t get a free PlayStation 5 upgrade. In addition, they’ll have to buy the PS5 version, restart the game, and play through the whole story once again to experience the PS5 gameplay.

Fans are clearly left frustrated as many were expecting to enjoy the newly launched experience without having to spend additional money and continue from where they left off in the last-gen PlayStation consoles.

Atlus announced a number of new Persona remasters including Persona 5 Royal at the Nintendo Direct Mini showcase last month (June 29). The news made the fans excited as they could revisit the fantastic RPG on newer platforms.

Recently, Atlus revealed in an FAQ on the game’s Japanese website that PS4 owners who want to play the enhanced version of Persona 5 Royal on PS5 will have to purchase the game again and restart it. They won’t be getting a free upgrade as previously assumed. 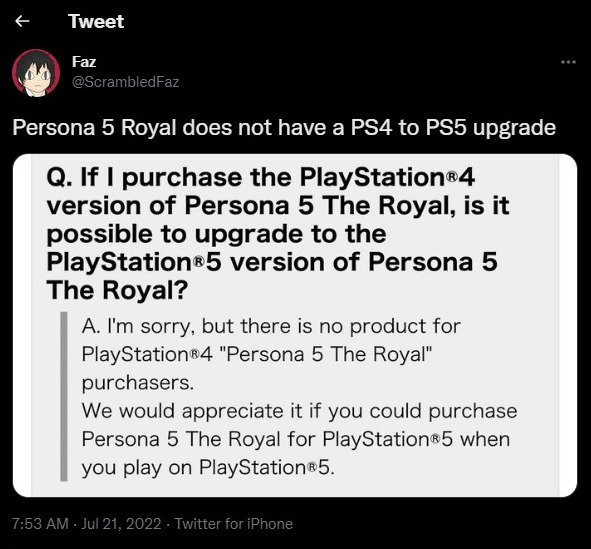 This has come as a shock to many as fans didn’t like the step and expressed their frustration on social media platforms including Twitter, Reddit, and others.

Although the PS4 version of Persona 5 Royal will still be compatible with the PS5 due to the next-gen console’s backward compatibility with last-gen games, players will have to spend another $60-$70 to get the enhanced PS5 version.

Persona 5 Royal is coming to more platforms this year

Persona 5 Royal is the enhanced version of Persona 5, which is the sixth installment in the popular franchise owned by Sega. It was released for the PS4 in Japan in October 2019 and globally in March 2020.

Now, Personal 5 Royal is coming to PlayStation 5, Xbox One, Xbox Series X|S, Windows PC, and Nintendo Switch this year. Although fans expected the game to arrive on Switch sooner, it didn’t happen.

Interestingly, Personal 5 Royal will also launch on the Game Pass. If you have the subscription, you’ll be able to enjoy the game for free on your Xbox consoles or PC.

Persona 5 Royal Release Date: When is it launching?

The release date of Persona 5 Royal is set for October 21, 2022, for PS5, Xbox, PC, and Switch. Following the launch, Persona 3 Portable and Persona 4 Golden will arrive in 2023. Atlus hasn’t provided a specific date for their launch yet. 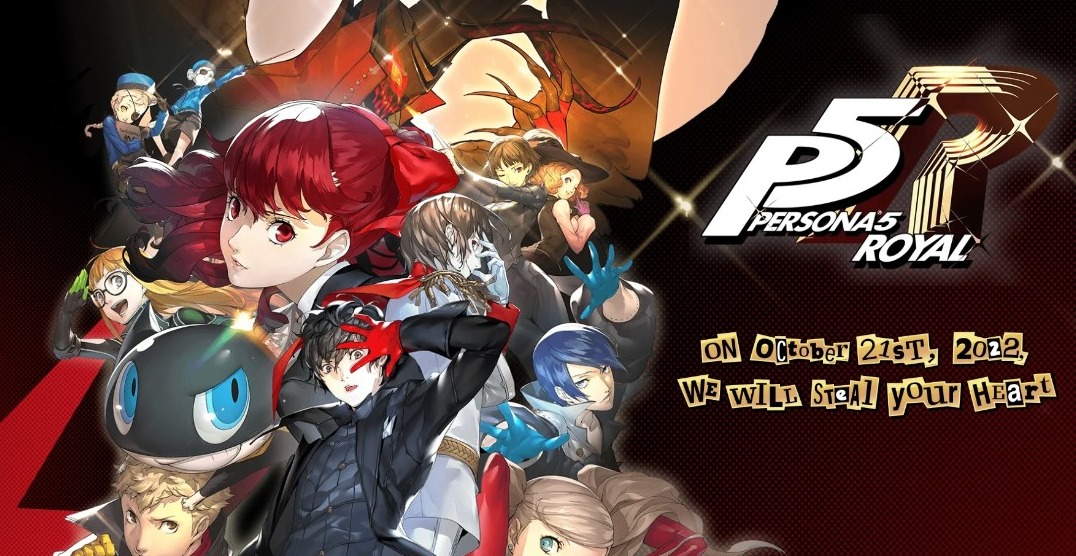 Unlike Persona 5 Royal, Persona 4 Portable and Persona 4 Golden will launch on PS4 instead of PS5, according to Atlus’ words. We’ll keep you updated once more information is available.

Persona 5 Royal Gameplay: What to expect in the new version?

Persona 5 Royal is an enhanced version of Persona 5 featuring additional characters and gameplay features. It also boasts graphical improvements and new music. The upcoming version launching on the PS5, Xbox, PC, and Switch will take the visuals to the next level.

Persona 5 takes place in modern-day Tokyo and follows a high school student known by his pseudonym Joker. The authorities put him on probation and transfer him to a new school after a false accusation of assault.

As time passes, Joker and some other students awaken to a special power and turn into a group of secret vigilantes called the “Phantom Thieves of Hearts.” They explore the Metaverse, which is a supernatural realm arising from humanity’s subconscious desires.

They start a quest to steal malevolent intent from the hearts of adults. Like the previous iterations, the group battles enemies titled Shadows using physical manifestations of their psyche called their “Personas.” You’ll find role-playing, dungeon crawling, and social simulation scenarios in the game.

Persona 5 Royal PC & Xbox Port will get all DLC free

Persona 5 Royal boasts a big collection of DLC, 45 to be precise. The good news is that all DLC for Persona 5 Royal will be included in the Windows and Xbox versions of the game. This means you don’t have to spend extra money to enjoy the additional content.

However, Atlus only confirmed about the PC and Xbox versions of the game getting all DLC included in the package. They didn’t mention the Steam version. It might mean that the offer is limited when you’re playing through Game Pass or the Microsoft Store. 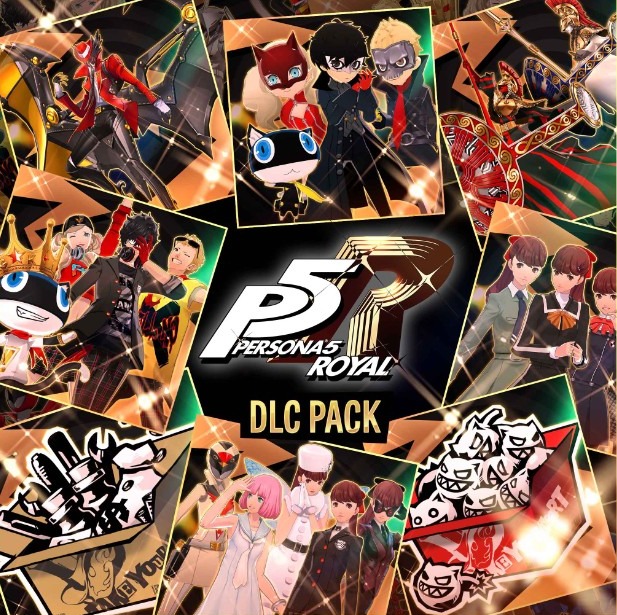 This could be another shocker after the news of PS4 players not getting a free or discounted upgrade. Hopefully, the Steam version and PlayStation players will also get the same treatment.

There are plenty of things to look forward to in the Persona 5 Royal DLC, from costume packs to BGM packs and extra personals. One of them offers a challenge battle mode that allows you to compete against Persona 3 and Persona 4’s heroes.

We’ll let you know if Atlus releases more information about the upcoming JRPG. Feel free to express your thoughts about the title in the comments.