Wordle’s rise to fame has given birth to a lot of spin-offs that people enjoy playing. One such Wordle-esque game is Mathle which is created to please mathematics maniacs who love solving puzzles including calculations. Another such game is Nerdle. We’ll take a look at them here. 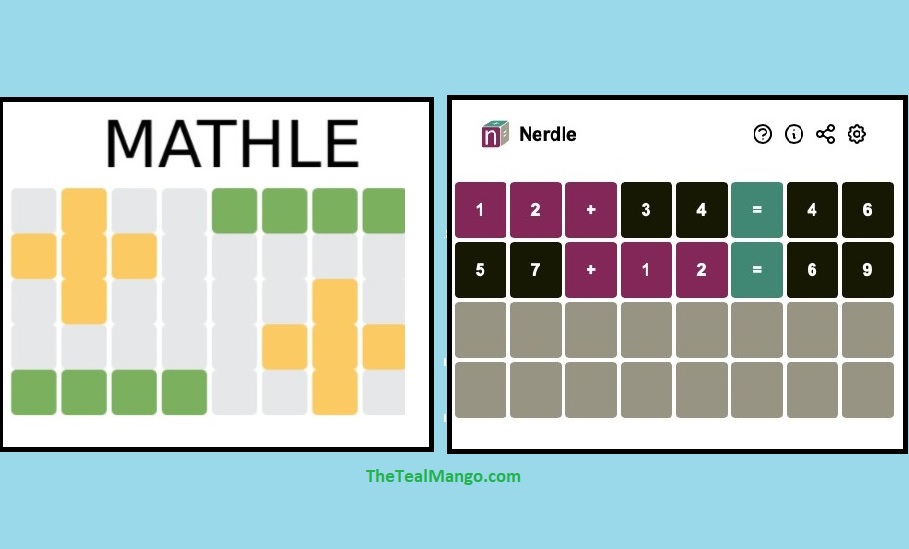 Every day, thousands of people worldwide play Wordle, which is now owned by The New York Times. It gets the whole world guessing a single word every day. Mathle follows the same concept but instead of the word, players have to guess the equation consisting of addition or subtraction in five attempts. Nerdle is an even more advanced version.

Once you have guessed the equation, you can show off your knowledge on your favorite social media platform, just like you share the right Wordles. Mathle and Nerdle are among the best Wordle alternatives available on the web right now.

Mathle is a math-based word game that allows you to test your arithmetic skills to guess the exact equation which consists of either addition or subtraction under five attempts. This game is created by Kiru, who is an indie hacker.

He has mentioned that Mathle is heavily inspired by Wordle and Primel, which is another Wordle spin-off consisting of prime numbers instead of words. Kiru has previously created more games like Wordle such as Reversle, Learnle, etc. 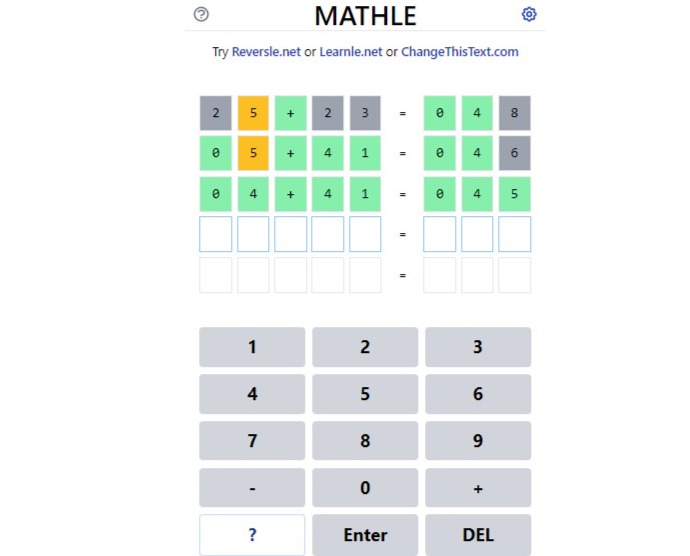 Mathle is his most popular creation that is trending these days, especially among people who enjoy solving mathematical puzzles. This game uses the core concept of the original game but replaces words with an equation having a + or – sign.

Every day, a new equation is set for the whole world. Players get 5 tries, instead of the 6 attempts in Wordle, to guess the exact equation. When you make guesses, you will see boxes changing their color from white to green, yellow, or grey. 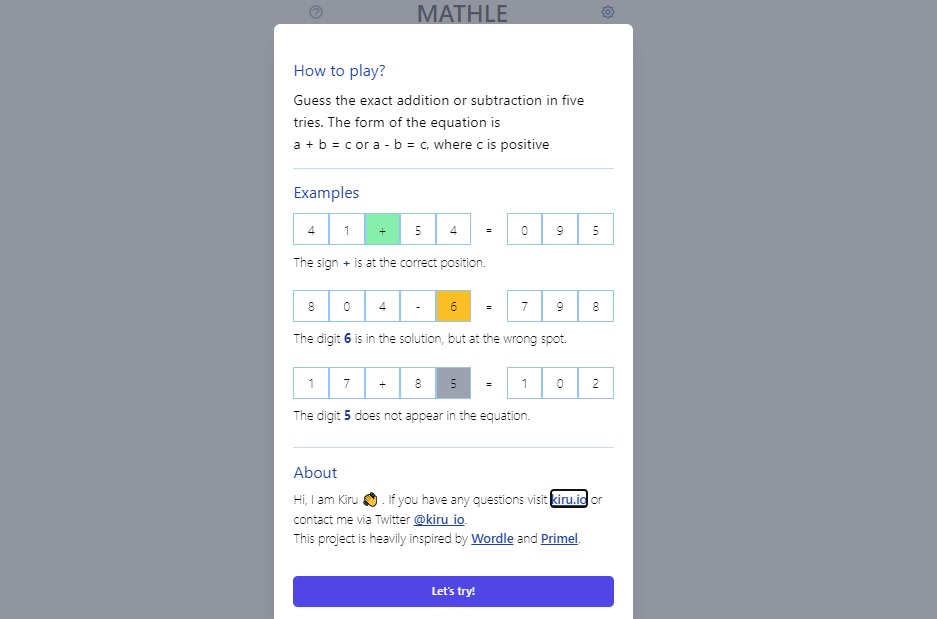 The equation used in Mathle is always using either of these two formats:

You will have a number pad consisting of 0 to 9 numbers, + sign, – sign, Enter, Delete, and a button with a question mark to explain the rules.

You need to start by entering a random equation, and then the colors of boxes will guide you. The “a+b” and ‘a-b” portions of the equation will always be on the left side, whereas the “c” will use the three boxes on the right side. C is always a positive number and may have 1, 2, or 3 digits.

The equations you guess must be mathematically logical as the calculation of the left side should always lead to the result on the right. You are allowed to use repetitive numbers as well.

Playing Mathle is very simple. Just launch a browser and head over to this website. Now you will see blank boxes and a number pad below it. You have to guess the equation of the day (called Mathle) using five or fewer attempts. 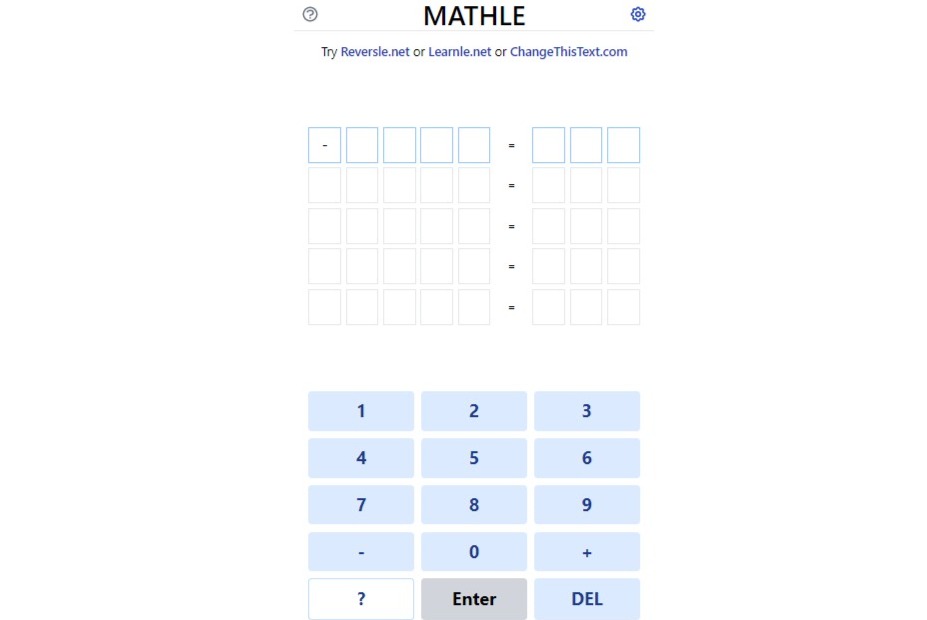 At first, you need to enter a random equation into the boxes but make sure it is mathematically correct. After that, you will get green, yellow, and grey boxes. After carefully noting them, enter the second equation.

Keep trying and put your brain at work until you are able to guess the right equation. That’s it. When you have guessed it right, you can share the results on a social media platform. 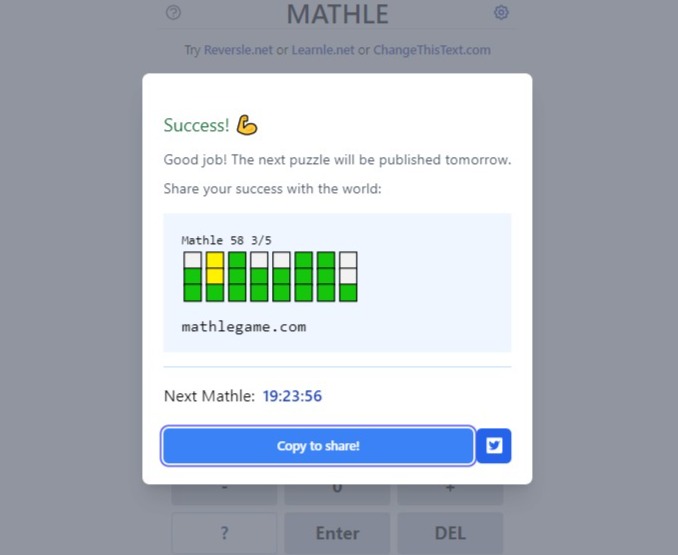 However, you run out of the five attempts, you will lose. But don’t worry, you can come back and try the next day.

Mathle also has a Color-Blind mode that allows players who are not able to distinguish between certain colors to enjoy the game. You can enable this mode by clicking on the ‘gear’ icon to go to Settings, and then moving its slider to the right side.

After turning the Color-Blind mode on, Mathle will replace green and yellow with red and blue respectively, as they are not color friendly. The grey will remain as it is. 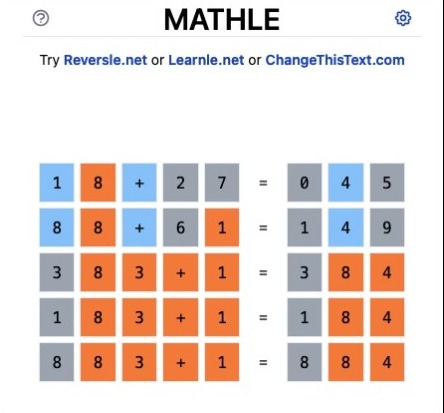 Nerdle: Another Math Alternative of Wordle

Nerdle is another Wordle Alternative for arithmetic fans that is very similar to Mathle. However, it is an even more advanced spin-off. This game is created by Richard Mann, who is a data scientist from London.

When playing Nerdle, you will not know the position of the equal (=) sign, and the equation is not only limited to addition and subtraction. You can also use multiplication and division. So, if you find Mathle very simple, you can try your hands at Nerdle.

Just like Wordle and Mathle, every day, the whole world has to guess the right “word” here. However, the word doesn’t include letters, but digits and mathematical signs forming a proper equation.

How to Play Nerdle?

To play Nerdle, open a web browser and visit this website. You will find a grid having 8 boxes horizontally and 6 boxes vertically. You will get six attempts to guess the right word which consists of eight letters (digits and signs).

There is a number pad available just below the grid. You need to use it to start guessing the right equation. The key challenge of the game is you do not know anything during the first attempt. It is completely random. 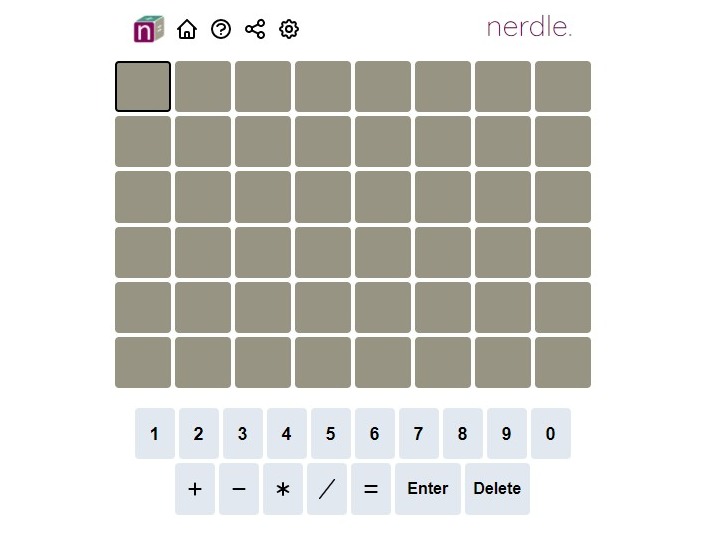 Continue working your brain taking hints from the colors of boxes, and you’ll be able to guess the correct equation. Once you do, you can showcase your achievement on any social media platform directly.