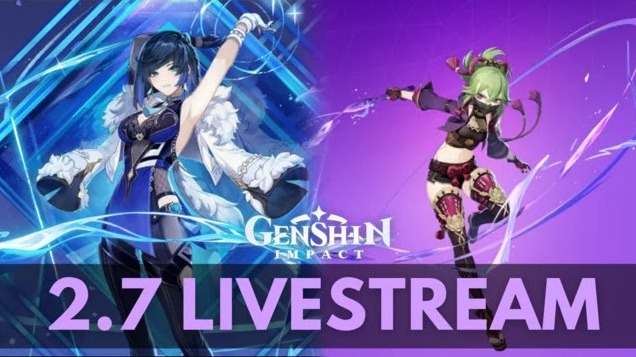 The Livestream by Hoyoverse is reportedly just days away, and fans will find more details about the mysterious Yelan, Kuki Shinobu, and the events taking place in the next version. It will also unveil game banners and share codes to get free Primogems and other items.

The expected release date for Genshin Impact 2.7 is May 11, 2022, and Hoyoverse usually broadcasts details about the upcoming update before two weeks of taking the server down for maintenance. Going by this pattern, the live stream is just a day or two away.

Genshin Impact fans are eagerly waiting for the 2.7 Livestream to find out what’s coming in the next update. Going by the previous trends of the live stream taking place two weeks before the actual update, it is due in late April or early May. However, miHoYo hasn’t made an official announcement yet.

According to @SaveYourPrimos and multiple other insiders, the Genshin Impact 2.7 Livestream is scheduled for Friday, April 29, 2022. An official announcement confirming the same is expected in the next 24 hours.

[Speculation] We have heard no word to the contrary, so Livestream /should/ be this Friday April 29th [NA], with an official announcement within the next 24 hours. https://t.co/ICISU9cUQW

If the live stream takes place this Friday, it will start at the usual time, which is 8:00 AM ET/ 5:00 AM PT/ 12:00 PM GMT. Here is a more detailed table for the start time of the Genshin Impact 2.7 Livestream:

However, there are also chances for the delay due to the surge in COVID-19 cases in Shanghai, China. Nothing is official at the time of writing, only precise speculation is available.

Update: Multiple sources report that the Official Art for the GI 2.7 Livestream has leaked online.

Does this confirm Xiao+Itto Rerun alongside Yelan for 2.7?

How to Watch Genshin Impact 2.7 Livestream?

Fans can watch the Genshin Impact 2.7 Livestream on the game’s official Twitch channel at the date and time mentioned above. The Livestream will also be uploaded to Genshin Impact’s YouTube channel later. If you are not able to catch it live, you can watch it later.

The broadcast on Twitch will be available in all supported languages including Chinese, Japanese, and Korean, while the YouTube premier will also have English captions enabled.

Genshin Impact players will also be treated with promo codes during the breaks between the Livestream. The developer will share three codes to get free Primogem and other Ascension materials. If you are not able to watch the live stream but still want to redeem the codes, we will help you.

We will update the Genshin Impact 2.7 Livestream promo codes here, and you can redeem them within 24 hours after the original broadcast.

As usual, the Genshin Impact 2.7 Livestream will feature voice actors explaining to the players about upcoming character banners, events, and the new content. Chasm, Kamisato Ayato, and the Irodori Festival took the main spot last time.

This time, Yelan, a mysterious five-star Hydro bow user, and Kuki Shinobu, an Electro sword ser and another member of Arataki Itto’s gang are expected to take the main spot, alongside the reportedly leaked events coming in the next version. 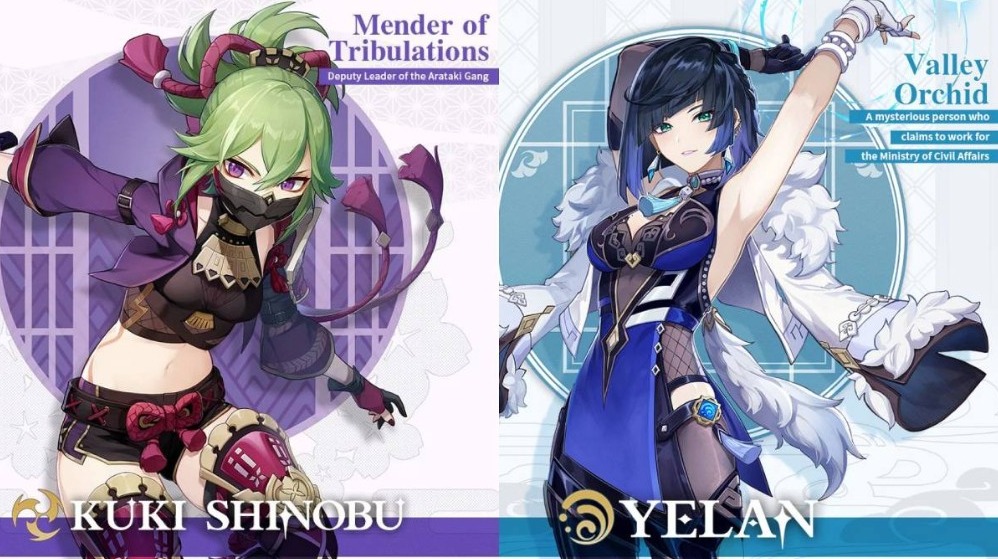 Both of these characters were announced as playable characters shortly before the current update.

Yelan will likely be the featured 5-star on the first Genshin Impact 2.7 banner, and Kuki Shinobu could be one of the supporting 4-star characters for the next banner. However, Uncle Y, a reliable Genshin leaker, reports that Arataki Itto will be the second featured 5-star.

That could actually make sense as he is the leader of Shinobu’s gang. Uncle Y also claims that Xiao would rerun alongside Yelan with Noelle, Barbara, and Yanfeir as the three accompanying 4-stars. The leaked Official Art for the upcoming live stream hints in the same direction.

Kazuha, which is another much-awaited character won’t be available in the next update. He is still scheduled for Genshin Impact version 2.8, according to the latest reports.

Potential Events Coming in the Next Update

Multiple events coming in Genshin Impact version 2.7 have already leaked. The most prominent one is called The Almighty Arataki Great and Glorious Drumalong Festival, which will allegedly be bigger than the ongoing Irodori Festival and the Lantern Rite celebrations.

A new chapter in the Archon Quest where Yelan will be the main character will also take place. In addition, a new story quest which will be a hangout event with Kuki Shinobu is also coming.

Heart of the Machine is another leaked event that will be a new quest for travelers to collect materials for creating toy robots after meeting a merchant from the hydro nation Fontaine.

The main event of the Genshin Impact 2.7 update will be Perilous Trails. It will be a combat challenge where the storyline will also have an incredible amount of fighting action. Xiao will have an integral role here, and the story will investigate the disappearance of the Electro Yaksha Bosacius.

With an extensive collection of incredible content coming in the next version, Genshin Impact fans are very excited for the upcoming 2.7 Livestream. How do you feel about it? Sound off in the comments.