eFootball 2022 rolled out the 1.00 update to officially kick off Season 1, and the patch included some much-required tweaks, new features, interesting gameplay and mechanic changes, and new football stars. Find out everything about it in this eFootball 2022 review. Konami seems to be following the route that Fortnite does with its heir to the wildly popular PES franchise. eFootball 2022 was initially released in September 2021 but had a lot of problems that made the players unable to enjoy the game.

However, the game studio has now rolled out the 1.00 patch, and Season 2 is in expectation to arrive in a couple of months. The latest update possibly takes the title in the right direction, but it still didn’t resolve all the issues.

That’s why we claimed that it isn’t “as great as PES” yet. Although if Konami keeps working and moving in the right manner, the Football-based title could soon reach its glory phase. The road is still a bit long though.

Konami launched update 1.00 for eFootball 2022 which is the official successor to the massively popular PES series last month. The new patch features a number of tweaks and improvements to the overall game experience.

When the title was initially released last year, it came with a long list of problems. The development team publically admitted that they became too focused on getting the game out on time and forgot to maintain the expected quality. 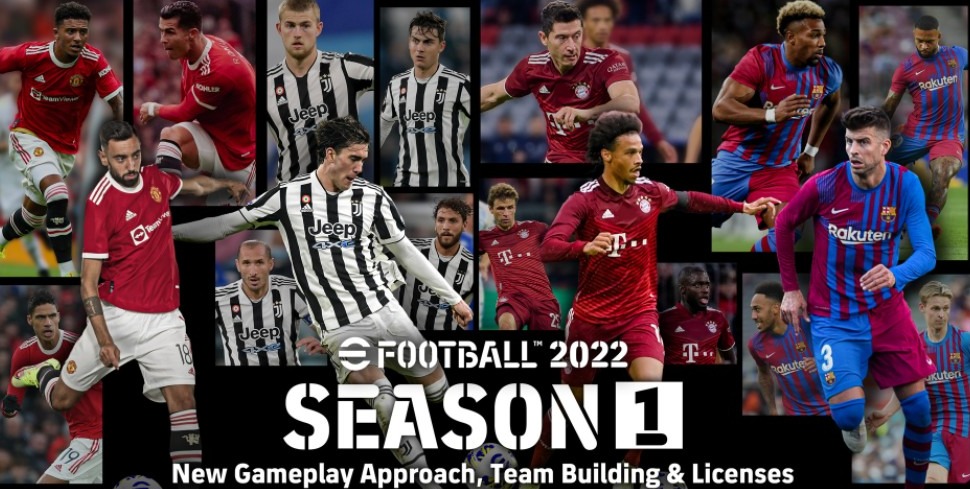 Now, the new patch is launched without the problematic graphics, an improved mechanism, and enhanced photo-realism. There are also plenty of new features and a completely overhauled gameplay system to allow players to enjoy their favorite football game smoothly.

However, the game still lacks certain aspects. For instance, there are still only nine teams available to play with. It lacks depth, modes, and any specific cause that would keep the players intrigued.

At launch, eFootball 2022 was just a mediocre title that no one would want to play. However, the new update has brought some crucial improvements and new features that have turned it into a title worth trying. It isn’t as glorious as PES though.

The game is still a regular sports-based game featuring no depth and interesting game modes. The player models and stadiums are fixed to an extent and they are more accurate now. However, the atmosphere inside the stadiums is still problematic. 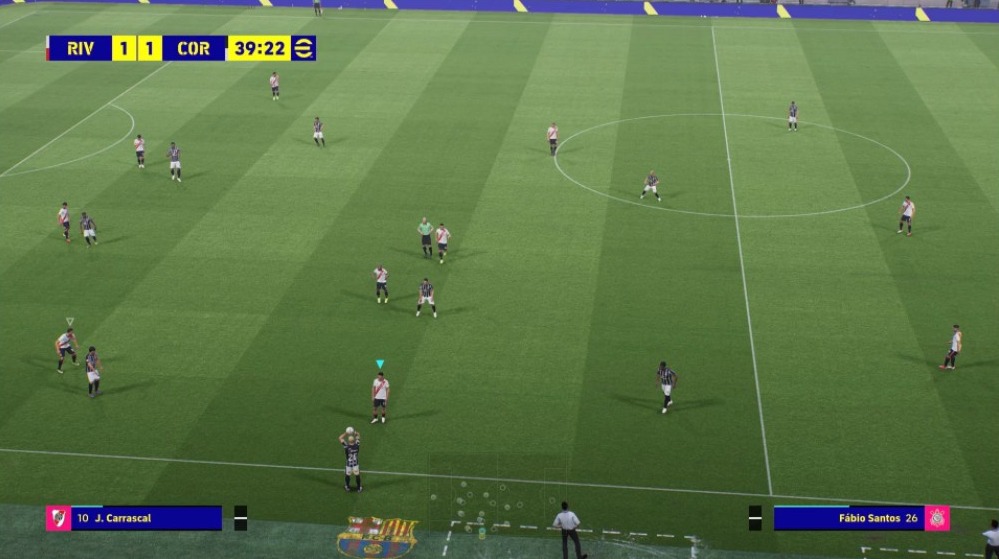 The commentary is still lifeless, some animations are still broken, and the menus & UI are unintuitive but more colorful. Still, Konami has brought the game on the right track. If it keeps moving in this direction, the game may soon become the pioneer of its genre that Pro Evolution Soccer (PES) was once.

eFootball’s previous versions had gameplay that made it hard to enjoy the game. However, the latest update has entirely overhauled the gameplay and mechanics. It seems smoother as the players are now not that stiff to control. The players have also become more reactive.

They do not ignore the balls outside of their immediate radius but you’ll still need a good understanding of the mechanism to cleanly lead your side to victory. The offensive and defensive controls are also improved. 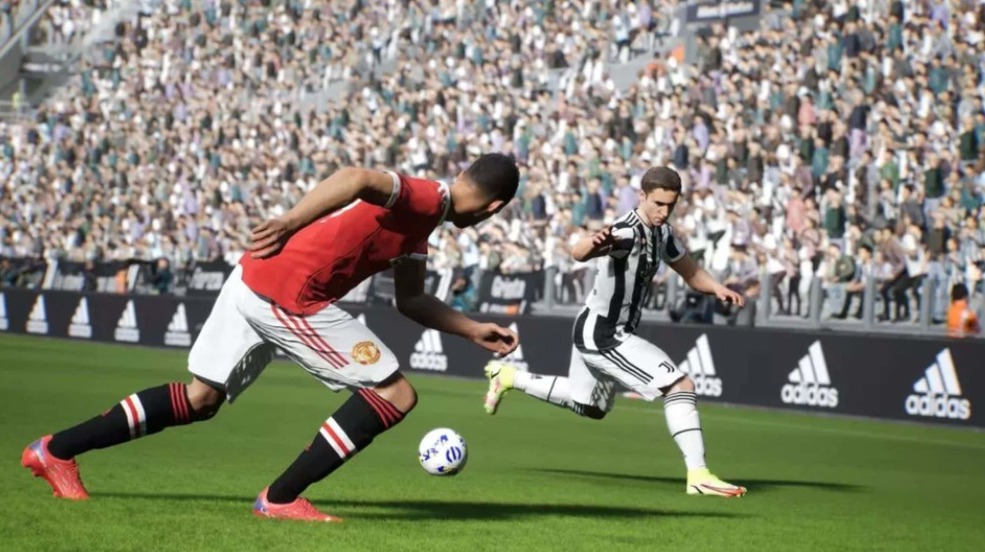 However, the defense still needs to be improved a lot with enhancements needed for shoulder changes and manual tackles. The AI defenders are still appearing to wander off out of position on their own allowing the opponents to score easy goals. This might be a bug that Konami would fix in the coming patches.

eFootball has also added an ability to press as a team and put pressure on the ball after fans called for this feature to replicate the modern-day play style. Calling allies for extra pressure and stealing the ball opens more goalscoring opportunities.

eFootball has added a number of new features including the Stunning Kicks. They allow the players to hold down the right trigger and apply extra power to passes and shots. You may use them to score amazing goals. However, sometimes the ball will get pinched from your toes as the player takes a long time to prepare for the kick.

Jacob: Use stunning kick with 50% power for downward header.

The goalkeepers are also more balanced now, and you’ll have fair chances of scoring goals with good shots. Konami has also worked on passes but they are still not too balanced. Some of them are like lasers while others just wander around cluelessly.

There are still not many ways to play eFootball

eFootball is a free-to-play cross-gen game, however, it features only a few modes that players can enjoy. There are only limited options available while the developers could’ve added a lot in the 1.00 update.

Konami has added “Dream Team” in the new update which is like FIFA’s Ultimate Team mode. This mode allows you to use both currencies earned in-game and real money to build an ultimate squad of players and climb the online rankings. Master League is the much-talked-about career mode that fans loved in PES. However, Konami will be offering the Master League and other offline modes as a DLC later. Apart from that, eFootball 2022 also lacks an edit feature to change players and teams which was a staple in its predecessors.

eFootball 2022 Season 1 which started earlier this year with a “New Gameplay Approach” is set to end on Thursday, May 19, 2022. However, the game won’t migrate to Season 2 just yet. Instead, there will be a pre-season for the next chapter, and update 1.10 will role out for console players initially.

eFootball 2022 Season 2 will kick off on June 16, 2022. This means the players will have to wait for around four weeks before the next chapter. The downtime for the Season 2 update will take three long days from May 30, 2022, to June 2, 2022. During this time, players won’t be able to play eFootball.

[About version 1.1.0 update for Console]

The events and campaigns for SEASON 1 have come to an end, and today marks the start of the pre-season period for SEASON 2. pic.twitter.com/H2iaIGSfKu

The upcoming 1.10 update is said to have improved “win/loss decision making” while also upgrading the game servers. The update for eFootball 2022 Season 2 will be a lot bigger, and we’ll have details about its patch notes soon.

That's not all, as on the same day the mobile version of eFootball PES 2021 will be re-launched as eFootball™ 2022! pic.twitter.com/DJEJY9n8EF

Final Verdict: Should you play eFootball 2022?

Yes, eFootball 2022 is definitely playable now and is way ahead of the horrific start it experienced last year. The gameplay and mechanics have become decent, there are new features available to make it more interesting, and there is also a new “Dream Team” mode to play.

Although the game still lacks a lot of things including more game modes and options to play, Konami is reportedly working on it big time. The upcoming updates including the major patch that will come with Season 2 for eFootball will add more enhancements to the game.

Before that, you can enjoy Season 1 and pre-season for Season 2 by ignoring a few bugs and shortcomings. Have you tried the game yet? Share what you expect from Konami to add to the game in Season 2.