Broccoli is indeed one of the most sworn-upon vegetables for the modern generation. Many people across the world, have time and again, posted a question: Is Broccoli man-made or natural? Now that I write this, I am sure it makes you wonder the same. While many edible plants can forage in the wild, Broccoli is certainly an exception. Read on to learn about these plants that form a part of some of the most delicious dishes. Is Broccoli Man-Made Or Natural? Broccoli is indeed a human invention. You may not be aware, but this vegetable is bred out of the wild cabbage plant, Brassica oleracea . It was initially cultivated to provide a specific taste or flavour that was more “palatable” to people. So how do plant breeders cultivate this vegetable, that people have started preferring over the years?

Wild cabbage or Brassica oleracea contains small flower buds and is a biennial (only flowers every other year). Therefore, plant breeders choose a controlled environment, to force it to reproduce itself many times. “When an offspring of the plant with larger, tastier buds grows, gardeners throw away the less tasty/bitter plants” and start “reproducing this vegetable from the productive ones”.

But hey, here’s the catch! Wild cabbage isn’t the only source of broccoli. Its “cultivars” (a term used for plants that can only be produced by selective breeding) include kale, brussels sprouts, cabbages and cauliflower. Were you aware of all this? Interesting, isn’t it?

The Origin Of Broccoli…

While often misunderstand that the plant was first grown in Italy, courtesy of the delicious pasta dishes, it is not exactly known how many years ago men created this veggie. However, many researchers suggested that the early variety of this plant was cultivated in the Mediterranean region during the Roman Empire in the 6th century BCE. 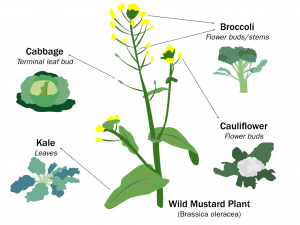 However, 2000 years after its creation, the plants continue to be improved through artificial selection in parts of what is now called Italy. In the 16th century, Broccoli was introduced in several other parts of Europe, which eventually led to its cultivation in those areas. The plant was introduced in the United States in the 17th century.

Is Broccoli Healthy Or Harmful? Broccoli, even though referred to by several health experts as a healthy diet, is often frowned upon by many. However, there is no denying that this vegetable has seen a tremendous rise in popularity over the years. It can be found fresh or frozen in your nearest supermarket and forms part of several delicious dishes. But, is the vegetable really healthy?

Broccoli is high in many nutrients, including fiber, vitamin C, vitamin K, iron, and potassium. It also contains more proteins than any other vegetable. This green veggie can be enjoyed both raw and cooked, but recent research shows that gentle steaming provides the most health benefits.

But again, what you mustn’t ignore is the fact that this vegetable contains thiocyanates, which leads to hyperthyroidism, and due to this, you experience problems like weight gain, fatigue, hair loss, and a bloated face.

It also impacts the functioning of your thyroid glands as it is ‘goitrogen’ in nature. When these chemicals interact with iodine in your body, it can enlarge these glands and leads to goitre. Therefore, avoid too much consumption of this fancy vegetable. If you found this article informative, share your thoughts in the comment section, and hey, if I’ve missed something, feel free to add!

Mallika
I am Mallika Singh, a lawyer and writer by profession. Writing gives me a sense of freedom and independence. I am a keen observer and an ardent reader. When not at work, you can find me at the stable. Horse riding is another passion that keeps me going.
RELATED ARTICLES
Food