Who is the Tallest Living Man in the World? Meet Sultan Kösen

Having a good height is nothing less than a blessing. Being tall is one of the elements of a perfect physical appearance which also creates a lasting impression on others. Call yourself lucky if you are blessed with it. Anywhere between 5 feet 6 inches and above is often considered a good height for females. For males, it is somewhere between 5 feet 8 inches and above.

You will be baffled to know that there is a person who stands around 8 feet tall. Yes, you heard that right. He is the tallest person in the world. Sultan Kösen  – the Tallest Person in the World

The Guinness World Records named Sultan Kosen the tallest person in the world. He is the first-ever man who stands over 8 feet tall out of the ten confirmed and reliable cases in the history of human existence. Sultan is a part-time farmer from Turkey. When he took the iconic title of the Tallest living man, he measured 8 feet 1 inch.

Two years later, Sultan turned 26 years old. He was measured again in Ankara. By that time, his height went up to 8 feet 2.8 inches.

Sultan was born on 10th December 1982. Interestingly, he did not start his incredible growth spurt until he turned 10 years old. The rest of his family, including his parents and four siblings, have an average height. Due to his gigantic size, Sultan could never finish his school. He, however, started working as a farmer to support his family. Sultan’s unique growth and massive height are caused by the condition known as pituitary gigantism. It is the result of the overproduction of growth hormones.

What is Pituitary Gigantism?

Human growth hormone is released from the pituitary gland in the brain. If the gland is damaged by a tumor, it may release too much or too little hormone. When released too much, the condition may lead to overproduction of large hands, painful joints, and thickening of the bones.

In an interview, Sultan funnily described that being tall has its advantages. He can help his mother out with daily jobs and chores such as hanging curtains, changing a broken bulb, and others. However, the condition comes with many disadvantages too. It becomes challenging to find the right size of shoes and clothes or even to drive a car, for that matter.

More Records in His Name

Apart from being the tallest man in the whole wide world, Sultan Koser has other records in his name. He holds the title of living person with the largest hands. Each of his hands measures 28.5 centimeters from the wrist to the tip of the middle finger. 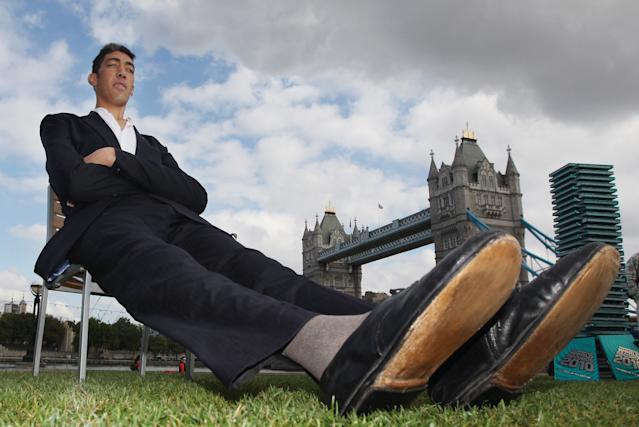 Previously, he held the title for the largest foot on a living person. His left foot measured 36.5 centimeters, and his right one measured 35.5 centimeters.

Where is Sultan Now?

On a personal front, Sultan is married to Merve Dibo. His wife is nine years younger than him and stands 5 feet 9 inches tall. They met through a mutual friend. Ever since he has become the record-holder of the Guinness World Records, Sultan has accomplished many of his dreams. He received life-saving medical treatment to stop himself from growing further. He also swapped his farming for Hollywood and bagged a role in the movie, Achieving the Impossible in 2016.