Heidi Klum is a model, television host, producer, and businesswoman. In 1998, she graced the cover of the Sports Illustrated Swimsuit Issue. She was the first German model to become a Victoria’s Secret Angel.

When the supermodel is not posing for the cameras, she likes to spend time with her kids. She is a proud mother of four kids. She shares her four children Leni, 18, Henry, 17, Johan, 16, and Lou, 13 with her ex-husband Seal. 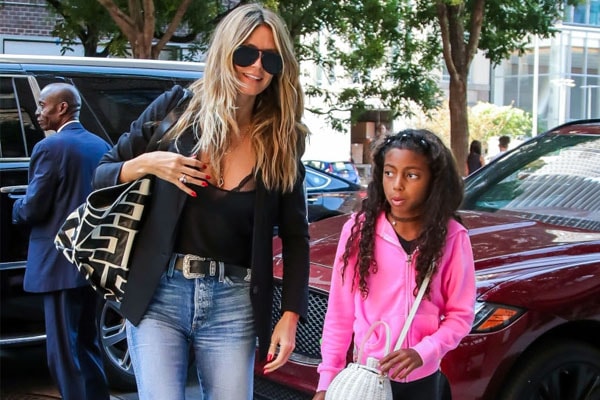 Continue reading further to know more about the youngest daughter of the German supermodel Heidi Klum, Lou Sulola Samuel including her age, interests, and more.

Here’s all you need to know about Heidi Klum’s youngest daughter Lou Sulola Samuel (including her birthday, age, and more)

For those of you who are unaware, let us share with you, Lou Sulola Samuel is the youngest daughter of the Project Runway host Heidi Klum and her ex-husband Seal. Lou was born on October 9, 2009, in Los Angeles. At the moment, she is 13 years old.

At the time of her birth, British singer Seal put out a statement that read, “It’s difficult to imagine loving another child as much as you love your existing children. Anyone who has a family will tell you this. Where will one find that extra love? If you love your existing children with all of your heart, how then can one possibly find more heart with which to love another?” He further added, “On Friday, Oct. 9, 2009, at 7:46 p.m., the answer to this question came in the form of our fourth child and second daughter. Lou Sulola Samuel was born, and from the moment she looked into both of our eyes, it was endless love at first sight.”

Lou has three siblings: sister Leni, and brothers Henry, and Johan. Lou’s eldest sister Leni is 18 years old now. Leni followed in the footsteps of her mom Heidi Klum and decided to be a model.

In an interview with People magazine, Leni disclosed that her mom Heidi didn’t let her model Brandy Melville when she was 12 years old. At that point, she told the magazine, “I was really sad about it, but in the end she was right. And I feel like that’s what sparked me to want to model more.”

A couple of years later, Leni bagged her first modeling gig posing for the cover of Vogue  Germany with her mother. Since then, she has graced the covers of Rollacoaster magazine, Harper’s Bazaar Germany as well as Glamour Germany. When Heidi was asked about the piece of advice she gave her daughter, she replied, “I said to her, at the end of the day you have to be happy with yourself. And don’t do anything you don’t want to do. It’s okay to say no. You don’t always have to please people. But I’m always with Leni. And she has a very good head on her shoulders.”

Lou also has 2 brothers. Her eldest brother is Henry Günther Ademola Dashtu Samuel. Not long after Heidi gave birth to Henry, she talked about the newest addition to her family with People magazine. The name of Lou’s other brother is Johan Riley Fyodor Taiwo Samuel and he is 16 years old. Back in the day, Heidi and Seal announced the news of their son’s arrival via a post written by Seal on Klum’s website.

At that time, the Kiss From a Rose singer spilled the beans on his son and penned, “He is healthy, beautiful and looks just like his mother. To our children, a brother/ To our parents, a grandson/ To my wife and I, a son/ To our family, a blessing.”

Like mom, like daughter! In a 2021 interview with People magazine, Heidi Klum revealed that her youngest daughter is the only one of her kids who seems to have inherited her love of Halloween. The America’s Got Talent judge is well known for Halloween parties and epic costumes, and she wanted to pass the tradition on to her kids.

Although, most of her kids “couldn’t care less” about the holiday. At that time, Heidi went on to say, “I was hoping that I would pass this on even to my kids, but out of four, there’s only one that really is going for it and that’s Lou.” Klum stated that her daughter Lou dolled up as an Anime character that year with “full on makeup, the hair, all the accessories.” Last year, Klum posted a sweet birthday post for her daughter Lou Sulola Samuel on the occasion of her 13th birthday. At that time, she posted a beautiful throwback picture of herself and her daughter on the social media platform Instagram.

In the snap shared on Instagram, both Heidi and her daughter Lou had ear cheetah-print face paint with Lou in cat ears. The photo showed the model with a big smile on her face, meanwhile, her daughter Lou Sulola Samuel had a confused look on her face.

We must say Heidi Klum and her daughter Lou Sulola Samuel make for a cute mother-daughter duo. Don’t forget to stay tuned with us for the latest updates from the world of showbiz.